Rally Finland - one of the most popular WRC events

The Rally Finland, formerly known as the 1000 Lakes Rally or the Rally of the Thousand Lakes, is one of the oldest and the most popular rally events in the world. Because of its tradition and its status among rally fans, it deserves to be put on the list of the greatest motorsport events in the world.

Rally Finland is one of the original WRC events since the inauguration of the World Rally Championship in 1973. During the years, the Finnish round of the championship was commonly referred as the Finnish Grand Prix or the Grand Prix of Rallying, because it was the fastest event on the calendar, with average speeds bigger than in any other WRC event. Rally Finland is the gravel rally which was scheduled mostly during the summer, in July or August. 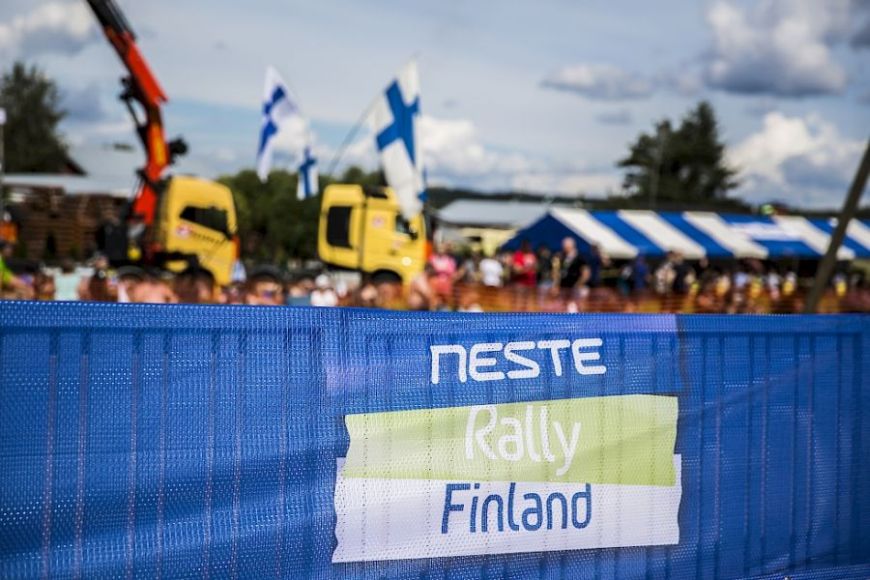 Rally Finland is one of the original WRC events since 1973

The inaugural Jyväskylä Grand Prix was held in 1951

The first Rally Finland was held under the name Jyväskylän Suurajot (Jyväskylä Grand Prix) in September 1951. According to the rules in that time, it was in a fact an endurance event, with a 1700 km long route. Start was in Jyväskylä in central Finland, the main checkpoint was in Rovaniemi in Lapland (Northern Finland) and competitors then returned to Jyväskylä. The first ever winner was Arvo Karlsson, who was driving the Austin A90 Atlantic.

The number of starting cities was increasing through the years, so there were eleven starting points in 1954. It was the year when the international name „The Rally of the 1000 Lakes“ was used for the first time. In 1955, the format was changed to something that modern rally events have, splitting the route into separate special stages. 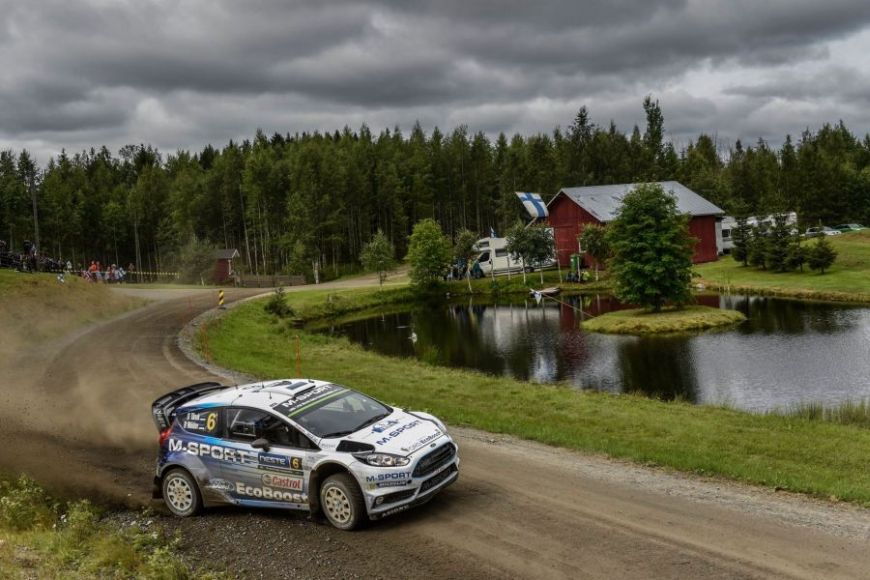 Part of the European Rally Championship since 1959

In 1957, after six consecutive wins of Finnish driver, Erik Carlsson became the first non-Finnish winner. He was driving the Saab 93. In 1958, the brothers Osmo and Eino Kalpala took the record third victory, driving Alfa Romeo Giulietta and scoring the first win for the Italian car.

The season 1959 was one of the milestone years for Rally Finland because the event was included in the European Rally Championship calendar. It was also one of the four rallies that counted towards the first-ever Finnish Rally Championship. The interest of foreign drivers was increasing rapidly, so in 1960 more than half of the 85 entrants was foreigners. The first fatal victim was recorded in 1960 when road worker was killed by a competitor.

Although there were many foreigners, the winners were still only Scandinavians, mostly Finnish drivers. During the 1960s, winners were Rauno Aaltonen, Pauli Toivonen, Simo Lampinen, Timo Mäkinen and Hannu Mikkola.

In 1965, a practice was allowed for competitors. It resulted in higher speeds, so the safety requirements were also higher. Organiser had to hire thousands of officials to close the roads and to watch on spectators. The higher speeds also meant more crashes, so the percentage of retirements were increasing rapidly. 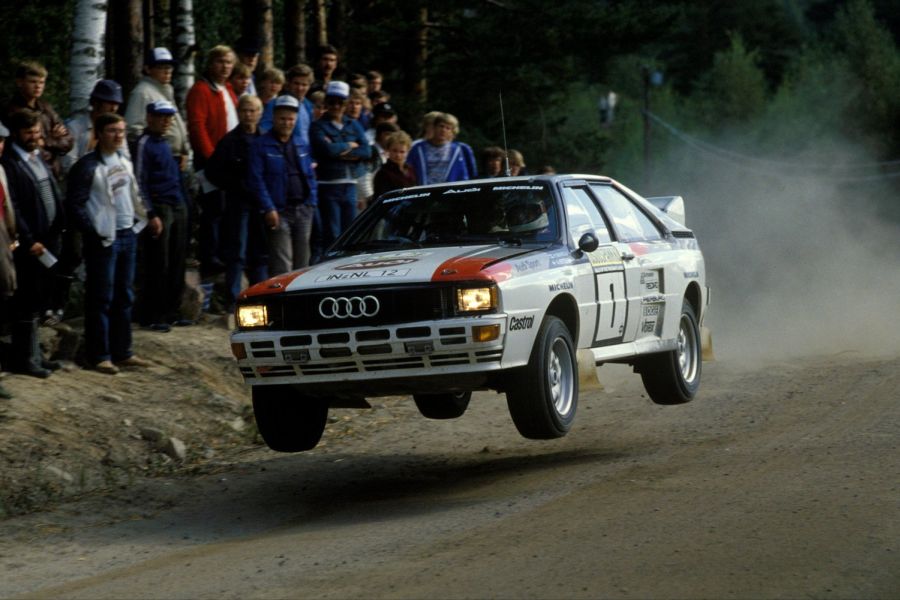 Hannu Mikkola is a record-holder with seven wins

The future world champion Hannu Mikkola has won three times in a row, from 1968 to 1970, driving the Ford Escort Twin Cam. It was a beginning of his victorious streak which ended with his record-breaking seventh victory in 1983, in a season when he became the world champion. Mikkola’s record is still standing, only Marcus Gronholm managed to tie with him, scoring seven wins between 2000 and 2007.

In the early 1970s, the Saab 96 V4 was a victorious car two times, driven by Stig Blomqvist (1971) and Simo Lampinen (1972).  And then the 1973 season came, when the World Rally Championship was launched. The Rally of 1000 Lakes was a part of the 13-event WRC calendar. The WRC status had brought back a strong international field from 13 different countries. Timo Mäkinen took the victory, his fourth in the event, driving the Ford Escort RS 1600. Markku Alen (Volvo 142) finished second, Leo Kinnunen (Porsche Carrera) was third.

In 1974, an event was marred by the first fatal accident of a competitor. Co-driver Seppo Jämsä died of injuries sustained in the Austin Mini Morris crash at Ouninpohja stage. The winner was Hannu Mikkola for the fourth time, again with Ford Escort. A year later, Mikkola has won fifth time, driving the Toyota Corolla Levin. It was the first win for the Japanese manufacturer in Finland. 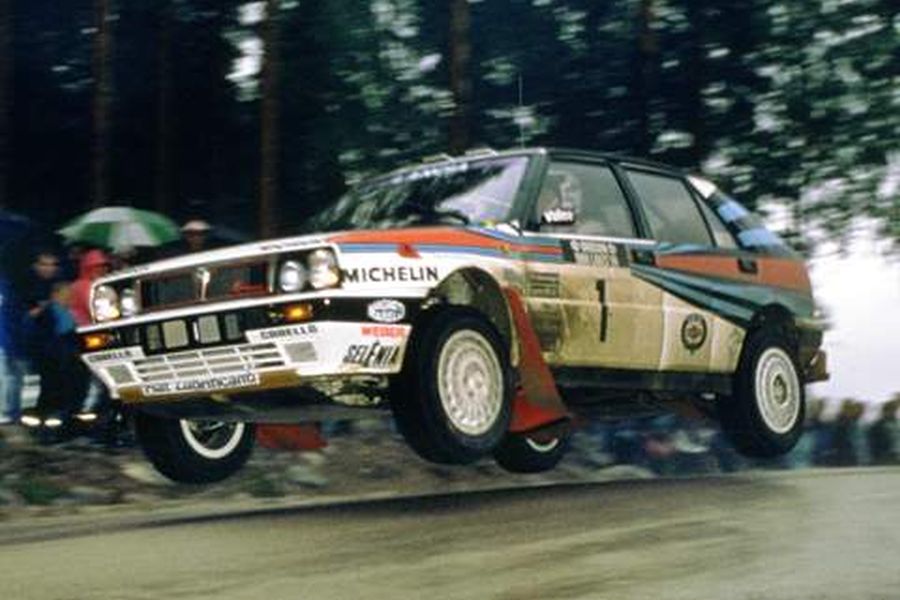 Markku Alen dominated in the late 1970s, winning four times between 1976 and 1980, driving the Fiat 131 Abarth. Alen added two more wins to his account in 1987 and 1988, winning with Lancia Delta, to round a number of his wins to six. He stays behind Hannu Mikkola with a total number of wins but still has the first place in the Hall of Fame by a number of podiums. Alen scored 16 podiums, against Mikkola’s ten podiums.

The 1980s were the dangerous times

During the 1980s, the domination of Finnish drivers continued, with Markku Alen, Ari Vatanen, Hannu Mikkola and Timo Salonen taking the victories. It was also the extremely dangerous period, especially when brutal Group B cars were competing, so many accidents took place at Rally Finland’s stages. In 1981, the Austrian Franz Wittmann lost control of his Audi Quattro and killed one race official. In 1983, co-driver Reijo Nygren lost his life in a crash. In 1984, Julian Roderick hit a wall of people with his Vauxhall Chevette, injuring nine spectators. 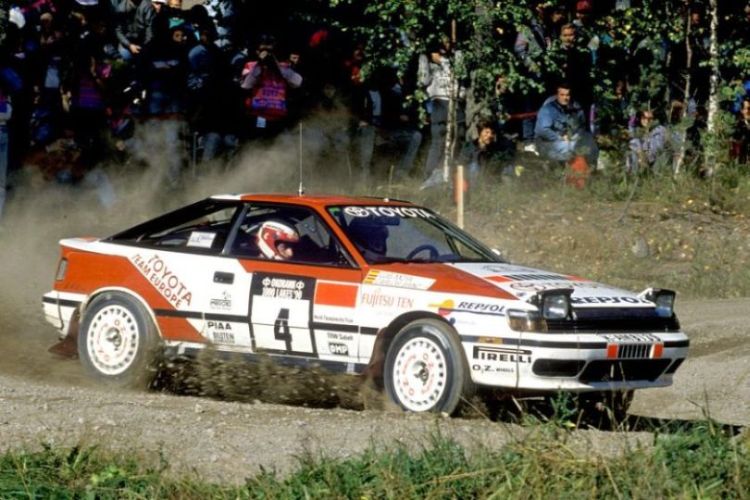 In 1990, Carlos Sainz was the first non-Scandinavian driver to win Rally Finland

In 1989, the Swedish driver Mikael Ericsson (Mitsubishi Galant VR-4) stopped the 17-year-long domination of the Flying Finns, becoming only the fourth non-Finnish driver to win the event. The historic first victory of non-Scandinavian driver followed in 1990 when the Spaniard Carlos Sainz won the event in the #4 Toyota Celica GT-4, ahead of Ari Vatanen and Kenneth Eriksson. That year, Sainz also became the world champion for the first time.

Juha Kankkunen scored his first win in 1991, driving the Lancia Delta Integrale 16V. The Frenchman Didier Auriol finished second. A year later, Auriol broke the curse and took the victory at 1992 1000 Lakes Rally, the second win for a non-Scandinavian driver.

No Finns at 2002 Rally Finland podium

For the next ten events, Finnish drivers again took the supremacy. Between 1993 and 2002, the winners were Juha Kankkunen (two times), Tommi Makinen (five times) and Marcus Gronholm (three times). Many non-Scandinavians were close to the win in that period, scoring podiums (Auriol, Sainz, Colin McRae, Richard Burns and Petter Solberg), but only the Estonian Markko Martin interrupted Gronholm’s winning streak in 2003. It was the first time in a history of the event that there were no Finns at all on the podium, as Martin won ahead of Petter Solberg and Richard Burns. 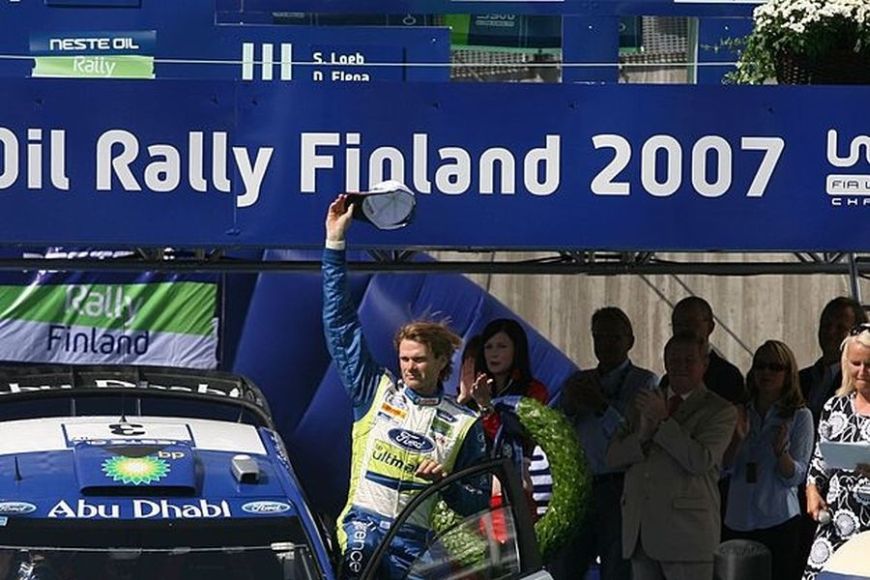 Marcus Gronholm continued to collect wins from 2004 to 2007, winning two times with Peugeot 307 WRC and two times with Ford Focus RS WRC. He stopped on seven wins, tying with Hannu Mikkola at the top of the winners list.

Jari-Matti Latvala scored his third win in 2015 with VW Polo R WRC. Prior to that, he won in 2010 and 2014, first time with Ford, second time with Volkswagen. Volkswagen Motorsport’s leading driver Sebastien Ogier became one more Frenchman with Rally Finland’s victory in his CV, topping another non-Finnish podium in 2013. The Belgian Thierry Neuville was second, the Norwegian Mads Ostberg was third. In 2016, Citroen’s Kris Meeke became the first British driver to win Rally Finland, beating Volkswagen’s Latvala and Citroen’s teammate Craig Breen.

In 2017, Esapekka Lappi scored his maiden WRC victory at Rally Finland, winning in a Toyota Yaris WRC. In 2018, the Estonian Ott Tanak gave one more victory to Toyota. 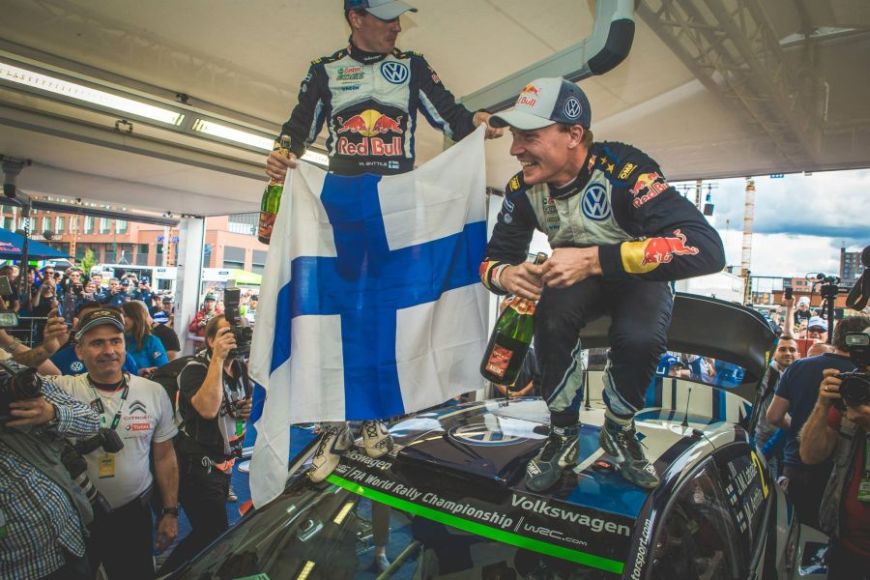 Jari-Matti Latvala has three wins at his home rally

Rally Finland is waiting for fans from all over the world

The story continues in August 2019, with the 69th edition of Rally Finland. The hundreds of thousands rally fans from all over the world again will visit the forests near Jyväskylä to watch probably the most spectacular rally of all.

Numerous jumps and ultra-high speeds on the smooth gravel roads turned the Rally Finland into the true racing spectacle and one of three WRC events with most spectators (other two are Rallye Monte-Carlo and Wales Rally GB). 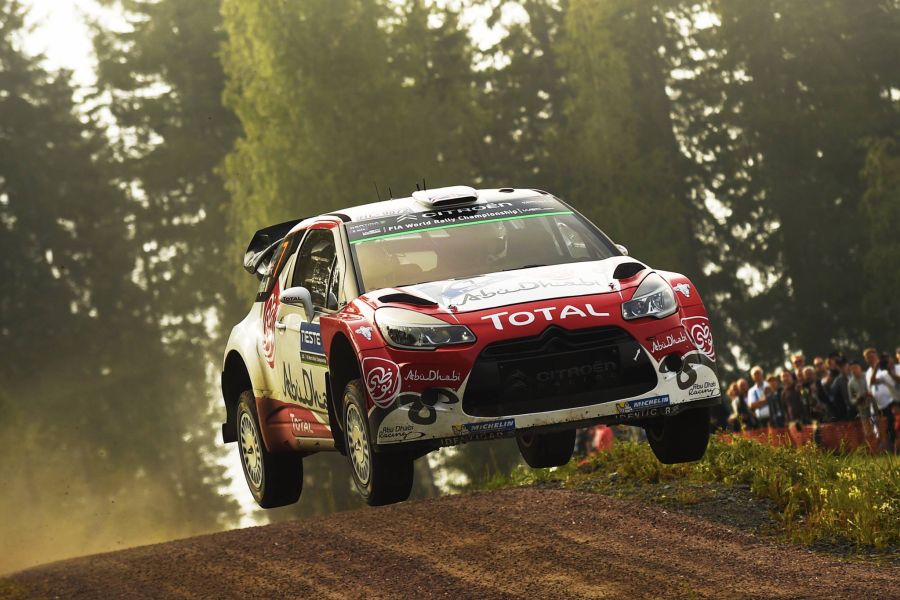 In 2016, Kris Meeke was the first British driver to win Rally Finland

Ouninpohja is one of the most popular stages

The famous Ouninpohja special stage is, next to Monte-Carlo’s Col de Turini or Sweden’s Colins Crest, among the most popular stages in the world of rallying, the place on which every rally fan wants to be at least once in a lifetime.

During the decades, the Ouninpohja was the fastest special stage in the WRC, until organisers slowed it down because of safety reasons. But, even slower Ouninpohja is a super fast section on which rally drivers are making a distinction between boys and men and it is the reason why rally fans adore that piece of Finnish wood. 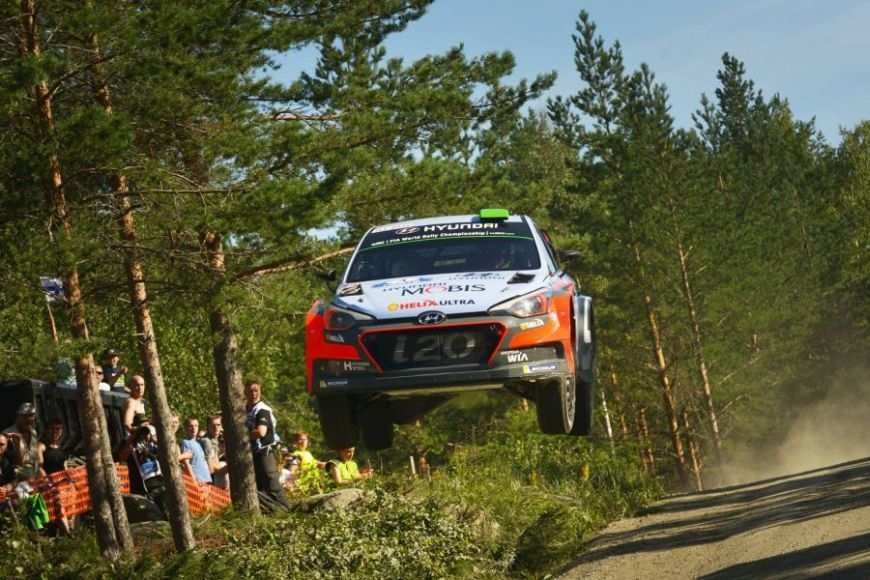 Some call it the Rally of thousand jumps