Ferrari 550 Maranello - Winning in the Hands of Privateers

The Ferrari 550 Maranello is the grand tourer sports car built by Ferrari from 1996 to 2002. Although not intended for motorsport and never being used in races by Ferrari, the various versions of the 550 were successful in different sports car competitions by private teams. 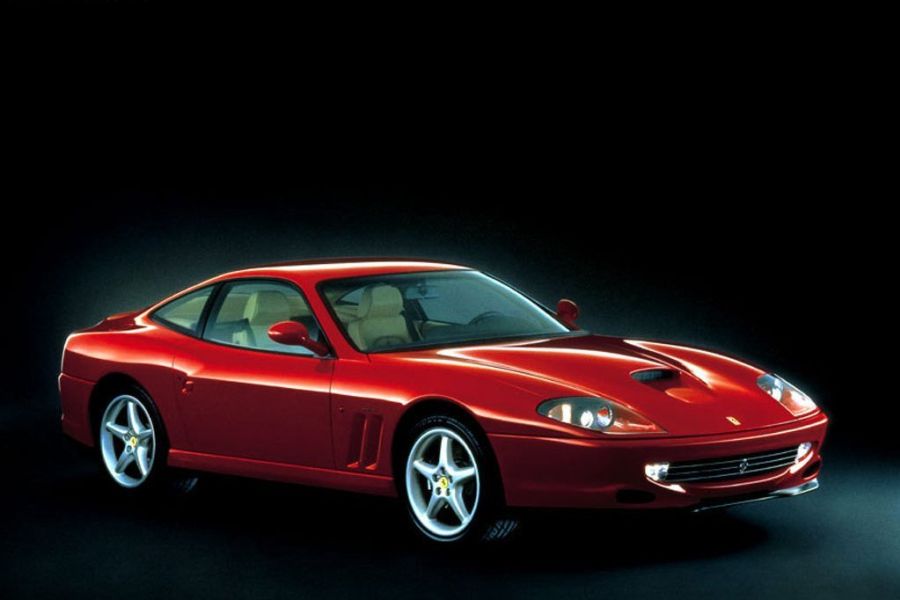 Ferrari 550 Maranello was launched in 1996 at Nürburgring

The car’s name referred to the 5.5-litre engine’s displacement and to the town of Maranello, home to the Ferrari headquarters and factory. The famous Pininfarina studio was responsible both for the exterior and interior design. The frame and main engine components were shared with the 2+2 Ferrari 456. In total, 3,083 units of the 550 Maranello were produced until its replacement, the 575M Maranello, came in 2002.

550 had race genes but it wasn’t intended for racing

The naturally aspirated V12 engine was producing a power output of 357 kW (485 hp) and 568 Nm of torque. All the power and torque were transferred to the rear axle via 6-speed gearbox. For the chassis, the tubular steel space frame was used, together with aluminum panels for the body. According to the manufacturer, the 550 Maranello had a top speed of 320 km/h and could accelerate from zero to 100 km/h in 4.4 seconds.The quarter-mile time was 12.5 seconds.

Ferrari developed the 550 Maranello exclusively for the street use, not intending to use it competitively at the racetracks. It took few years until the first racing version appeared in 1999, being built without Ferrari’s factory involvement. 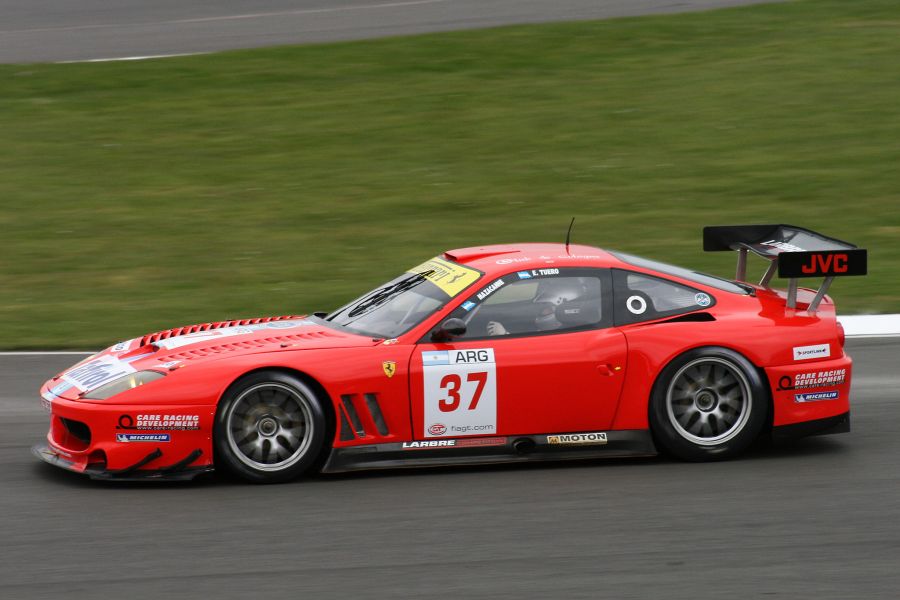 Ferrari 550 has an impressive racing history

The Ferrari 550 GT debuted in the French GT Championship

The first Ferrari 550 GT was a project guided by Michel Enjolras, the car was assembled in the Italtecnica workshop and it was used by the French team Red Racing in the GT3 class of the 1999 French GT Championship.

The Ferrari 550 Maranello was in use in the French GT Championship until 2009, driven by many different teams. The best result was the second place in the 2005 championship season for Larbre Competition drivers Gabriel Balthazard and Jerome Policand.

In 2000, Italtecnica gets a financial support from some investors led by Stephane Ratel and created another racing version of the 550, the car named 550 Millennio. It was developed under GT regulations and debuted in the 2000 FIA GT Championship season, entered by First Racing. The next year, the 550 Millenio was used by Team Rafanelli, which also enter a single car in the 2002 American Le Mans Series.

FIA GT Championship was the main playground for the 550

Since 2000, the FIA GT Championship was the main playground for all racing versions of the Ferrari 550 Maranello. The 2001 season saw two new private companies to become race car builders. The first project was initiated by the German entrepreneur and engineer Franz Wieth, who hired the Baumgartner Sportwagen Technik to build 550 GTS. Wieth Racing started to use a car in the 2001 FIA GT Championship.

On the other side, the British Prodrive built a racing version of the 550, commissioned by Frederic Dor’s company Care Racing Development. Prodrive’s car was initially known as 550 GTO and then renamed 550 GTS (not related to Wieth’s project). Prodrive built a total of ten cars over the next four years for the own team as well for customer teams.

In the 2001 FIA GT Championship, Team Rafanelli’s Ferrari 550 was regularly scoring points, driven by Marc Duez, Günther Blieninger, Emanuele Naspetti and Mimmo Schiattarella. The Prodrive All Stars team debuted in the sixth round at Hungaroring, with Alain Menu and Rickard Rydell as drivers in the #15 Ferrari 550 GTS, not finishing the race.

The first great success followed in the 8th round at A1-Ring, where Peter Kox and Rickard Rydell brought the maiden FIA GT victory for Prodrive’s Ferrari. In the next race, Kox and Rydell were third at Nurburgring and then another victory followed, for Rydell and Alain Menu at Jarama Circuit. At the end of the limited-schedule season, Prodrive finished fifth in the teams’ championship, one place ahead of Team Rafanelli. 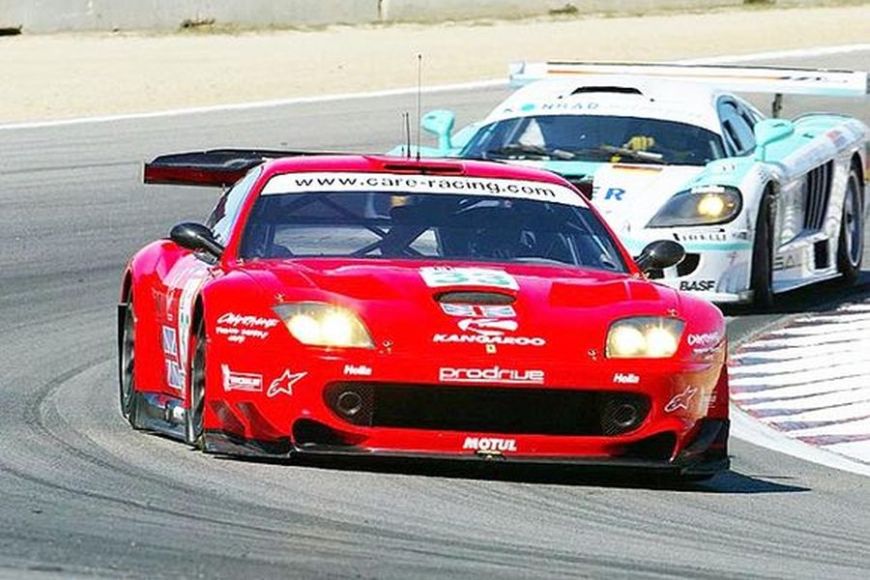 In the 2002 FIA GT Championship season, the BMS Scuderia Italia was the leading team which was running Ferrari 550 GTS. The team scored four wins (Jarama, Anderstorp, Oschersleben and Estoril) to finish fourth in the teams’ standings. The drivers of the winning car were Andrea Piccini and Jean-Denis Deletraz.

Prodrive skipped the 2002 FIA GT season but gained some success in the American Le Mans Series. Team Olive Garden and Prodrive were using the Ferrari 550 for most of the season in the GTS class while the XL Racing entered few races in the GT class.

Domenico Mimmo Schiattarella and Emanuele Naspetti captured few GTS class podiums for their team but the highlight of the season was the class victory for Prodrive’s Peter Kox and Tomaš Enge at Laguna Seca. In the last two rounds, Prodrive scored two more podiums to finish 6th in the final ALMS standings, one place behind Team Olive Garden. 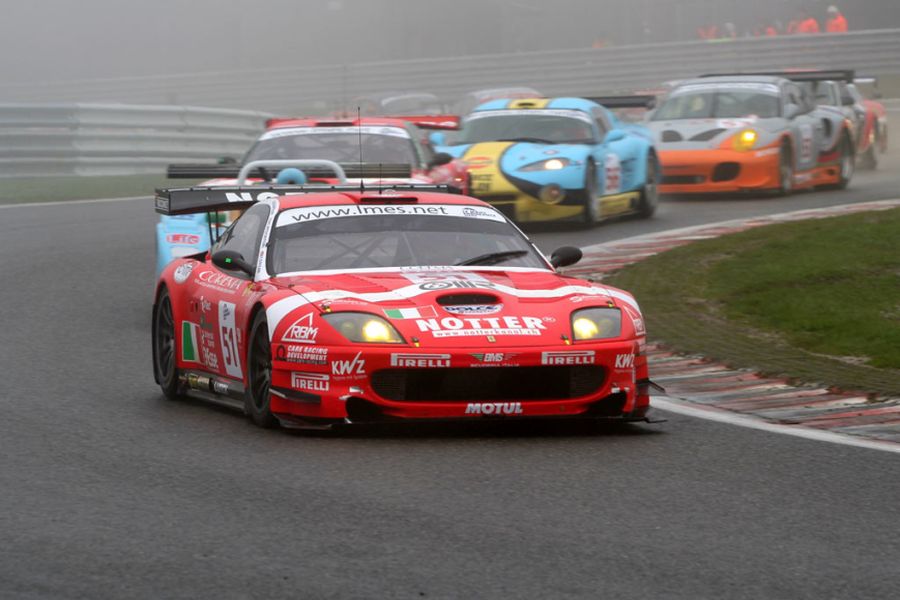 In 2003, the Ferrari 550 reached the top of the world for the first time. It was a dominant car in the FIA GT Championship and BMS Scuderia Italia scored eight wins in ten races. Thomas Biagi and Matteo Bobbi opened the winning streak with #23 Ferrari at Circuit de Catalunya, then adding victories at Magny-Cours, Pergusa, Brno, Donington and Oschersleben.

At 24 hours of Spa, the #22 Ferrari won the race in the GT class, driven by Fabrizio Gollin, Luca Cappellari, Enzo Calderari and Lilian Bryner. Gollin and Cappellari scored one more win in the season-closing race at Monza.

Four wins for Prodrive in the 2003 ALMS season

In the American Le Mans Series, Prodrive contested full season to finish in the second place of GTS class, behind Corvette Racing. In the first part of the championship, Corvette Racing dominated and won five races in a row. In the last four races, Prodrive took four consecutive wins. The drivers of the victorious cars were Jan Magnussen, David Brabham, Darren Turner, Alain Menu, Tomaš Enge and Peter Kox. 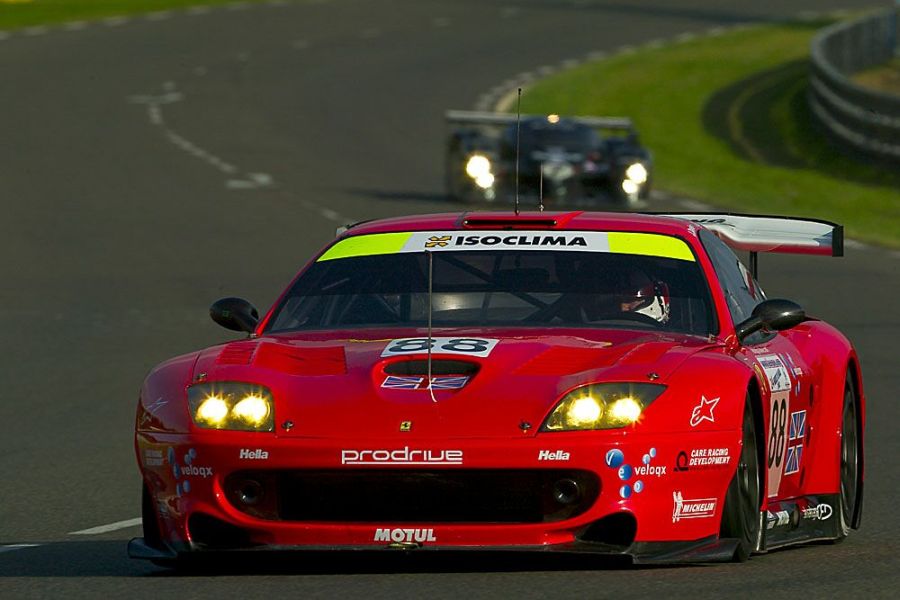 Besides contesting in different championships, Ferrari 550 was the regular entry at 24 hours of Le Mans since 2002, when Prodrive had a debut with one car. The #58 Ferrari, driven by Rickard Rydell, Tomaš Enge and Alain Menu, didn’t reach the finish line.

In 2003, four 550s participated in the race and one of them won the GTS class. The #88 Veloqx Prodrive Ferrari, driven by Tomaš Enge, Peter Kox and Jamie Davies, finished 10th overall and first in GTS class, beating two Corvettes for ten laps. Prodrive had one more car, other two were entered by Luc Alphand Aventures and XL Racing.

In 2004, Prodrive returned to Le Mans with two Ferrari 550s. This time, Corvette Racing took two top podium places, Prodrive was third with Darren Turner, Colin McRae and Rickard Rydell in the #65 car. The #66 Prodrive car was fourth, ahead of #69 Larbre Competition Ferrari.

At 2005 Le Mans race, Larbre Competition missed the GT1 class podium, finishing in the fourth place. In 2006, three 550s entered the race but neither one reached the finish. The last appearance for 550 at Le Mans was in 2007 when Convers MenX Racing finished 14th overall and 8th in GT1 class.

After a successful season in 2003, even better results followed in 2004, as Ferrari 550 was the championship winning car both in the FIA GT Championship and Le Mans Series. BMS Scuderia Italia won five out of eleven races to win the FIA GT title. Fabrizio Gollin and Luca Cappellari were the winners three times, including 24h Spa, to take drivers’ title in GT class.

In the inaugural season of the Le Mans Series, the #86 Larbre Competition Ferrari won all four races in the GTS class, dominantly taking a title. The victorious drivers were Christophe Bouchut, Pedro Lamy and Steve Zacchia. In the 2005 FIA GT Championship season, Larbre Competition finished in the third place among teams. Their driver Gabriele Gardel has won the GT1 championship for drivers. 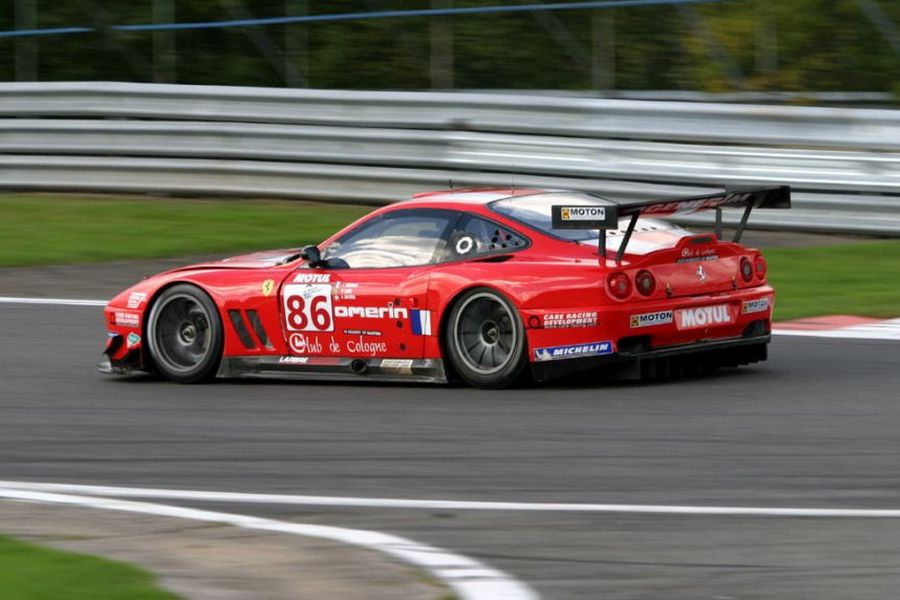 In 2005, BMS Scuderia Italia moved to the Le Mans Series, winning its third championship title in three consecutive years. The team’s two Ferraris won three races. At Spa, the winners in the #52 car were Fabrizio Gollin, Matteo Cressoni and Miguel Ramos. The #51 car, driven by Christian Pescatori, Michele Bartyan and Toni Seiler, won the races at Monza and Istanbul.

In the 2006 LMS season, there were no more wins for Ferrari. The Convers MenX team fielded one 550 GTS, finishing in the second place of GT1 standings. It was the last season for 550 in the Le Mans Series.

The first success followed in 2006, when the team moved to the Japan Le Mans Challenge, winning the GT1-class title. The team repeated that success in 2007.