Lancia Delta HF is definitely one of the most iconic rally cars in the history of rallying. This is the car which has won 46 WRC races in seven competitive years (from 1987 to 1993). It is the vehicle that millions dream about and pilgrimage to see in action, driven by the masters of rallying. It is also the car which even 20 years after retiring is still talked about with respect and utter admiration.

Group B was banned, Group A was born

Lancia Delta HF’s story began after Group B rally cars (including the Lancia Delta S4) got banned in 1986. Manufacturers had to adapt to new rules and Group A became the top formula in the World Rally Championship.

Lancia had the Delta HF 4WD, a car which was suitable to the new rules more than other competitors (the underpowered Mazda 323 and Ford Sierra XR4x4, the powerful but rear-drive Ford Sierra RS Cosworth, the BMW M3 and the front-drive Opel Kadett GSi and Renault 11 Turbo). 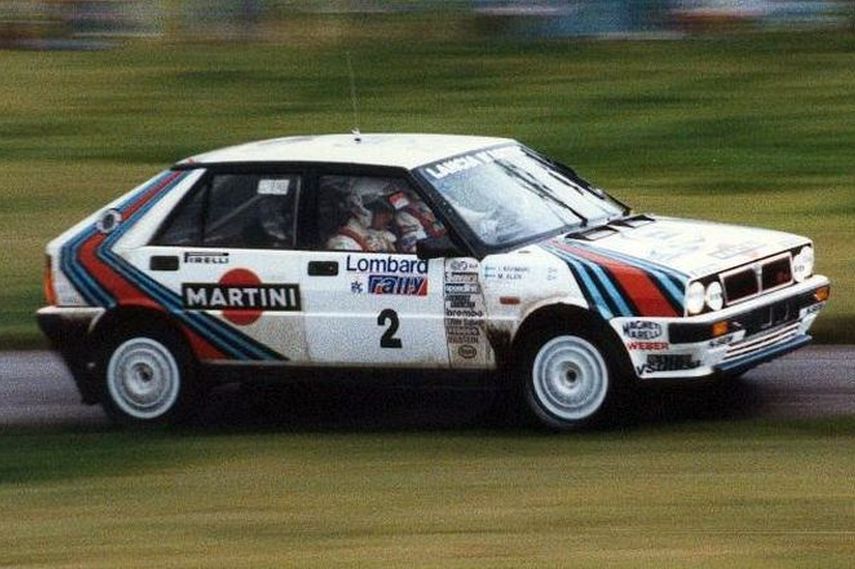 World titles for Kankkunen and Lancia in 1987

Delta HF 4WD, which was based on the road version, featured a two-liter turbocharged engine (165 hp) and a four-wheel-drive. Perhaps it isn’t a spectacularly high level of power judging by the actual WRC criterion, but that little car (389 cm long) weighed under 1000 kg and with a 4WD, it was just perfect to drive.

The Martini Lancia drivers at the time were Massimo ‘Miki’ Biasion, Juha Kankkunen and Markku Alen. Kankkunen was the 1986 world champion (with Peugeot) and in 1987, he had won the title again, ahead of Biasion and Alen. Apart from them, Mikael Ericsson and Bruno Saby also added to the points tally for the team. Lancia had won seven of the eleven rounds which counted towards the manufacturers’ championship, and they had won the world title ahead of Audi and Renault. 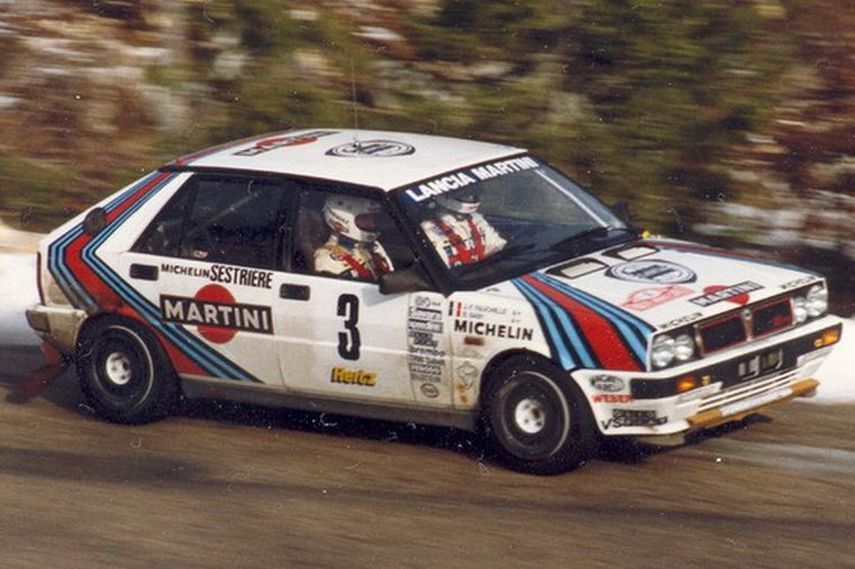 Lancia Delta HF 4WD had also won the first two events of the 1988 season (Bruno Saby at Monte Carlo and Markku Alen in Sweden) before the new version – Delta HF Integrale 8v, appeared at the third round in Portugal. The team boss, Cesare Fiorio, remarked in an interview before that event that the Integrale’s larger wheels, bigger brakes, improved suspension, and greater power would make it more competitive on asphalt, although on gravel it represented a relatively small improvement over the 4WD.

Miki Biasion was the 1988 champion, ahead of Markku Alen and Alex Fiorio, the driver of Jolly Club team which also ran Lancia Deltas. Martini Lancia had won ten of the eleven championship rallies and the manufacturers’ title.

The debut of HF Integrale 16v

In 1989, Martini Lancia continued its domination, winning seven out of ten rallies (drivers were Biasion, Alen, Saby, and Didier Auriol). Miki Biasion won the championship title again, ahead of Fiorio and Kankkunen who drove for Toyota. Martini Lancia Team drove Delta HF Integrale 8v throughout the year until the Sanremo Rally, where the HF Integrale 16v made its debut.

In 1990, the HF Integrale 16v was a championship winning machine. Kankkunen rejoined the team at the sides of Biasion and Auriol. Lancia won the fourth consecutive manufacturers’ title with six wins. These wins were shared between three of the team’s drivers and Carlos Sainz in a Toyota became the drivers’ champion.

In 1991, a close battle between Toyota and Lancia ended with the fifth consecutive title for the Italian team, with just a nine-point gap. It was a similar situation in the drivers’ championship, with Juha Kankkunen winning with only seven points more than Carlos Sainz. Auriol ranked third driving for the private team Jolly Club. 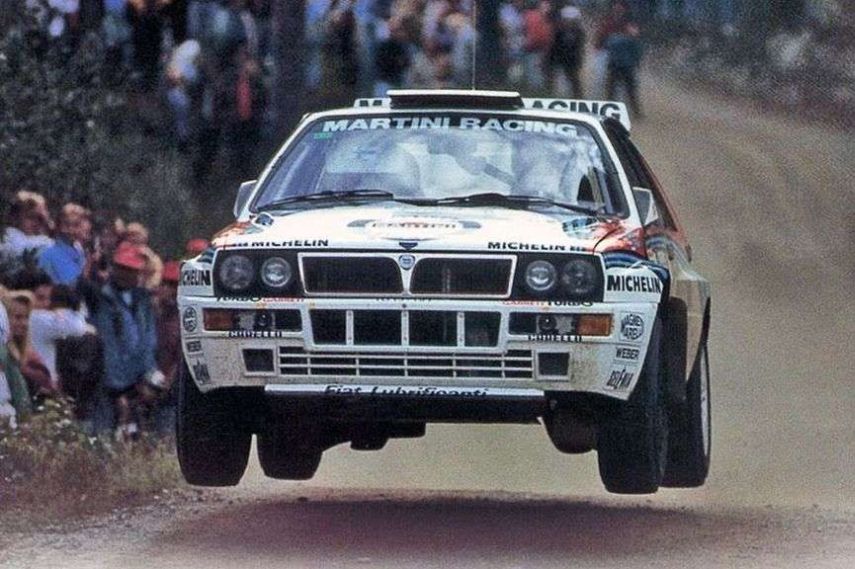 In 1992, at the Rallye Monte-Carlo, Martini Lancia debuted with the Delta HF Integrale Evoluzione. Lancia officially withdrew from rallying, so the cars were operated by Jolly Club, albeit initially with continuing support from the factory. This final evolution of Delta HF, with its stiffer body, wider wheel arches, bigger wheels and brakes, improved suspension and aerodynamics, and a more powerful engine was 5-6% faster under most circumstances than the 16v car.

The most dangerous rival was the all-new Toyota Celica Turbo 4WD ST185. Toyota’s driver Carlos Sainz once again won the title, but Lancia was the best manufacturer for the sixth consecutive time. It was Lancia’s last title to date. 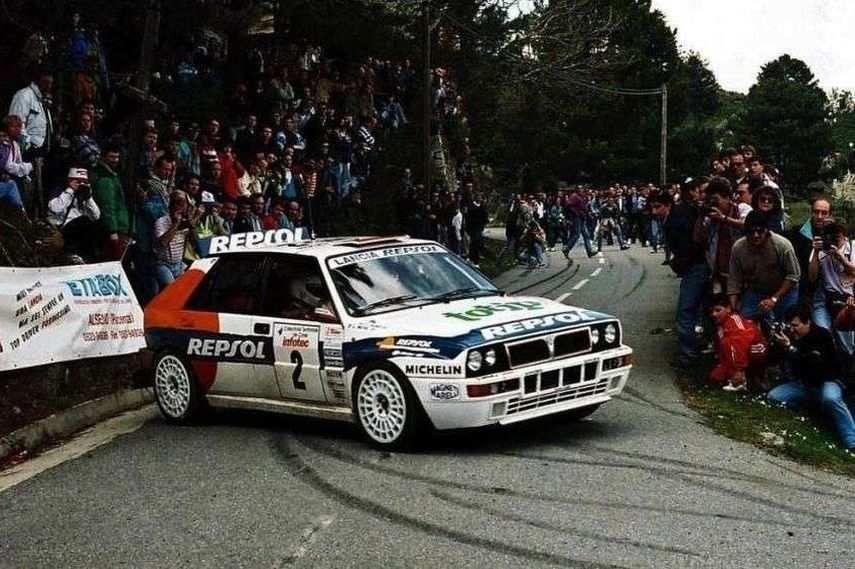 1993 was the last high-competitive year for this legendary car, with Carlos Sainz and Andrea Aghini driving for the Jolly Club. Martini’s sponsorship ended and Delta was run in the colors of Sainz’s sponsor Repsol. With two second places, Sainz finished sixth in the championship.

The Delta HF was used in some events in 1994 by Astra Motorsport but with no successbetter and newer cars were on the stage and Delta was ready to go to a museum.

But everybody knows that such cars aren’t made for museums, even though they are old and outdatedmany Deltas are often seen at historic rally events so that we can enjoy watching and remembering their days of glory.

Video : The story about various evolutions of Lancia Delta