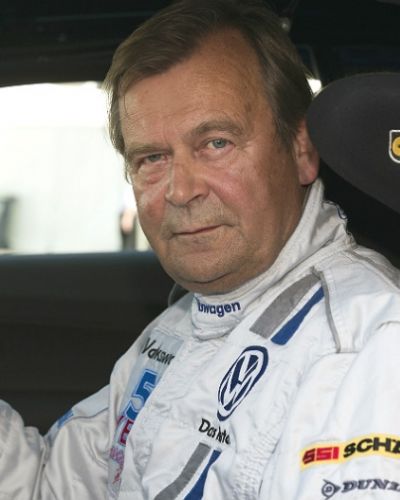 During his WRC career he competed in 129 races and scored 19 victories. He held the record for most stage wins (801) in the WRC, until Sebastien Loeb overtook it in 2011.

Father was also a racing driver

Markku Allan Alén was born on February 15th, 1951 in Helsinki. As usual for many racing drivers, Marrku was infected with interest for motorsport from his father, who was the Finnish champion in ice racing.

Alén's career started in 1969, driving a Renault 8 Gordini in some Finnish races. The most known race was the 1000 Lakes Rally, which was part of the European Championship. Alen finished ninth, together with co-driver Juhani Toivonen

Starting a career with Renault 8 Gordini

Toivonen was Markku Alén's co-driver until 1973. In 1969 and 1970 they competed with Renault 8 Gordini, Sunbeam Imp, Sunbeam 9000 and Opel Rally Kadett. In 1971, Markku Alén made a contract with the Finnish Volvo importer and he got a Volvo 142 for racing. He finished third at the 1000 Lakes Rally in 1971 and 1972. His only events outside Finland were the 1971 Rally Norge and 1972 RAC Rally, which was part of the International Championship for Manufacturers.

In 1973, World Rally Championship was formed and Markku Alén debuted at his first WRC event. Of course, it was 1000 Lakes Rally. Still driving Volvo 142, he finished second, behind Timo Mäkinen with Ford Escort RS 1600 MkI.

At the end of the season he caught the attention of the racing community with an outstanding performance at the 1973 RAC Rally. With Ford Escort RS 1600 MkI he finished third, despite rolling his car on the first day and dropping to the end of the field. His co-driver was Ilkka Kivimäki, who joined Alen for the 1974 season.

Good performances brought him deals with both Fiat and Ford. He was driving a Ford Escort RS 1600 MkI on two European Rally Championship events and again at Lombard RAC Rally. He scored his first ever victory at ERC's Welsh Rally.

Markku Alén demolished his Ford Escort at 1973 RAC Raly, but didn't give up and finished third

In the World Rally Championship he became a Fiat factory driver with a salary bigger than most of rival drivers. He competed with Fiat 124 Abarth in six WRC events, scoring podium places in Portugal, Finland and USA.

In 1975 he remained the only Fiat driver, both in ERC and WRC. Co-driven by Ilkka Kivimäki, Markku Alén competed in eight WRC events and scored his first WRC victory at Rallye de Portugal. It's interesting that at his home event, 1000 Lakes Rally, Alén competed with Datsun 160J.

Season 1976 started with Rallye Monte-Carlo and Fiat 124 Abarth, but after that the new Fiat 131 Abarth was introduced. The new car was a big improvement over its predecessor and Alén finally won the 1000 Lakes Rally for the first time. It was his only victory in the 1976 WRC season.

The following victory ensued at the 1977 Rally de Portugal. Alén competed in eight events an helped Fiat to win their first manufacturers' title in 1977. Other drivers who scored victories for Fiat were Bernard Darniche, Jean Claude Andruet, Timo Salonen and Fulvio Bacchelli.

1978 season was successful both for Fiat and Markku Alén, with manufacturers' and drivers' world titles. Drivers' competition was called Cup for Rally Drivers and it was consisted not only of WRC events, but also some ERC and national events counted.

Move to Lancia and debut with Group B car

Finnish duo Alen-Kivimäki continued to compete with Fiat for the following three seasons. Alén was third in the 1979 championship, sixth in 1980 and fourth in 1981. Fiat 131 Abarth was the victorious car in many ERC and national events, while in the WRC Alén scored three more wins (1000 Lakes Rally 1979 and 1989, Rally de Portugal 1981).

Alén drove the Lancia Stratos HF at RAC Rally in 1979 and 1981, so, after Fiat left the World Rally Championship, he moved to Lancia's team in 1982. Alen debuted with the all-new Group B Lancia 037 Rally at the 1982 Rally Costa Smeralda, which was part of ERC, and retired because of gearbox problems. Five WRC events followed in the cockpit of the Lancia 037 Rally, with three retirements and non-podium finishes at Tour de Corse and RAC Rally.

1983 season was much more successful, especially for Lancia Martini Racing team. With two victories (Tour de Corse and Rallye Sanremo) and three more podiums, Markku Alen finished third in the championship, while Lancia took manufacturers' title ahead of Audi. Martini Racing won the title with Lancia 037 Rally against Audi Quattro and it was the last rear-wheel drive car which won the world rally title.

In 1984, Markku Alen was again third in the championship, with one victory (Tour de Corse) and four podiums, while Audi retook the title from Lancia. In 1985, Lancia was still running with 037, but in the final round of the season it was replaced by the four-wheel drive Delta S4. Lancia Delta S4 immediately took double victory at 1985 Lombard RAC Rally, with Henri Toivonen as the winner and Markku Alen in second podium spot. It was the event on which MG Metro 6R4 also had debuted, with Tony Pond on third place.

Controversial end of the 1986 season

In 1986, Juha Kankkunen and Peugeot 205 Turbo 16 won the titles, Marrku Alen and Lancia took second places in drivers' and manufacturers' classifications. The season 1986 will be always remembered because of Henri Toivonen's death at Tour de Corse and the title-controversy.

During the season, Alen scored five podiums and finally won at Rallye San Remo. The Peugeot team was excluded by the organisers because of the allegedly technical faults, but after the season, FISA decided that the exclusion was illegal. The results of the rally were annulled, so Alen lost his victory and lost the title, which he had held for just eleven days. Except Sanremo, he won at American Toyota Olympus Rally.

As a protest against FISA's decision, Alen boycotted the 1987 Rallye Monte-Carlo, the first event of the season. It was the first year after Group B was banned. Alen quickly adapted to Group A Lancia Delta HF 4WD and won three of seven races. Lancia took manufacturers' titles and three Lancia drivers were on the top of the drivers' standings – Kankkunen, Biasion and Alen.

In 1988, Markku Alen moved one step up to second place in the championship standings, after three victories in six races, including his first ever win at RAC Rally, in which he competed since 1972. It remained his last WRC victory. Lancia again was manufacturers' champion, while Alen's teammate Miki Biasion took the drivers' title.

In 1989, Alen competed in just three events with Martini's Lancia Delta Integrale and in 1990 he was driving Subaru Legacy RS at five WRC events, including 1000 Lakes Rally and he achieved fourth place finish. He continued with Subaru in 1991 and scored 3rd place finish at Swedish Rally.

Another Japanese manufacturer, Toyota, hired Markku Alen for the season of 1992. He competed at seven events with Toyota Celica Turbo 4WD, with third place finish at 1000 Lakes Rally as the best result. Season 1993 was his last WRC season, still with Ilkka Kivimäki as the co-driver. He competed with Subaru Legacy RS at Rallye de Portugal (finished 4th), with Toyota Celica Turbo 4WD at Safari Rally (finished 2nd) and with Subaru Impreza 555 at 1000 Lakes Rally (retired).

As many other retired fellow drivers, Markku Alén occasionally raced at various historic events and rally shows, but also as a serious competitor. He appeared as a guest driver at one more WRC event, when he celebrated his 50th birthday driving Ford Focus WRC at 2001 Neste Rally Finland and finished in the respectable 16th place.

Together with Juha Kankkunen he competed in the 2004 Finnish rallycross championship with BMW M3. Kankkunen was first, Alén was second. He participated twice in the famous Dakar Rally, first time in 2005 in the truck category together with former Lancia teammate Miki Biasion, and in 2007 with Isuzu D-Max in a car category.

Markku Alén participated in the 2005 Dakar Rally with Iveco truck

Markku Alén raced not only on dirty gravel roads, he tried circuit racing also. In 1980 he participated with Scuderia Lancia Corse 24 Hours of Le Mans. His teammates were Piercarlo Ghinzani and Gianfranco Brancatelli, they drove Lancia Beta Montecarlo and retired after only 26 laps.

In 1995, Alén tried Alfa Romeo 155 V6 TI in two races of DTM and two races of International Touring Car Championship. He also drove the 1994 Porsche Carrera in the one race of Porsche Carrera Cup Germany, while in 2012 he was a guest driver in Volkswagen Scirocco R Cup Germany. And finally, same as his father, Markku Alén competed in Trophy Andros ice racing championship during the late 1990s.