The Nissan GTP ZX-Turbo (also known as GTP ZX-T) is a race car used by Nissan and private teams in the IMSA GT Championship from 1986 to 1990. The GTP ZX-T was a car that stopped the dominance of Porsche 962 in the American sports car racing, being Geoff Brabham’s championship-winning car in 1988. Brabham added two more IMSA GT titles while driving GTP ZX-T. In 1989 and 1990, GTP ZX-T also won manufacturers’ titles for Nissan and scored two consecutive wins at 12 hours of Sebring.

A story about this successful race car began in 1984 when Nissan named Electramotive Engineering as their official North American racing development company. Nissan’s intention was to use the IMSA GT Championship as a showcase of their technology. Nissan would provide turbocharged VG30ET V6 engines, best known for their 300 ZX car, while Electramotive would build race cars and participate in races. 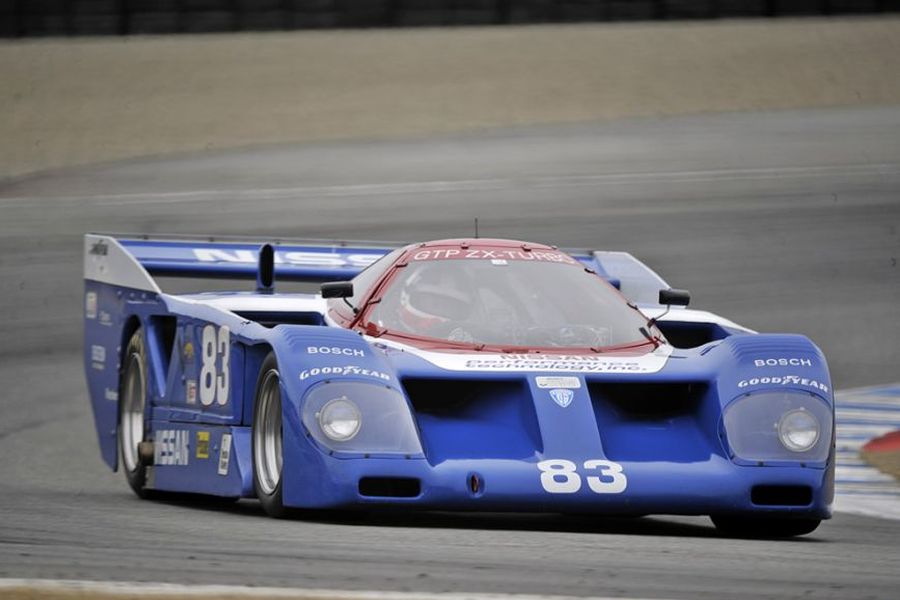 For the chassis, Nissan and Electramotive turned to Lola Cars International, ordering a construction of their new car according to their specifications. Because of that, the first examples of a new car were named Lola T810.

The first three chassis were completed in early 1985 and they were used in races as a development chassis in preparation for the 1986 IMSA season, driven by Electramotive owner Don Devendorf and co-driver Tony Adamowicz. Their first race was at Laguna Seca in May 1985, where they finished 11th overall. Later they improved their best result with the 9th place at Sears Point. 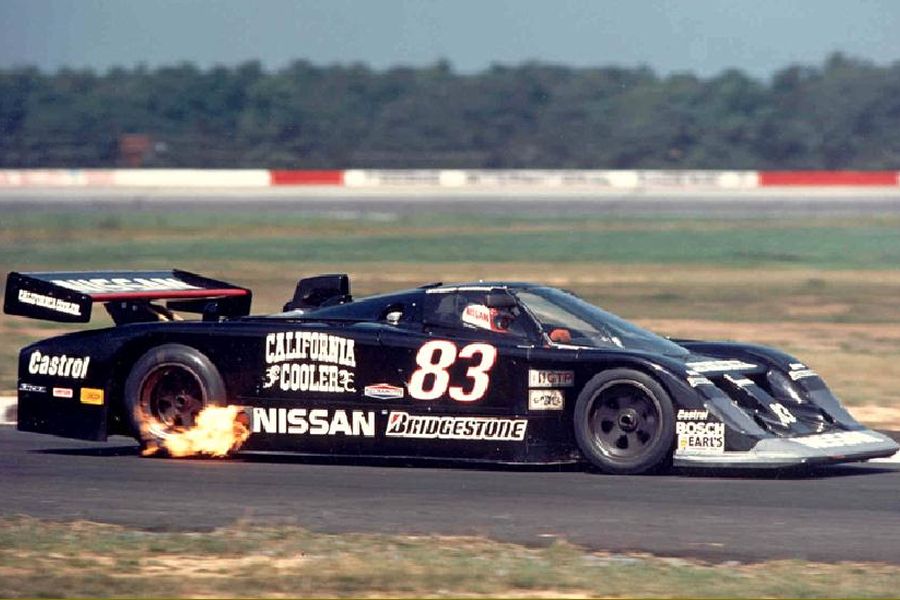 GTP ZX-Turbo debuted at the streets of Miami

During that development phase, Electramotive was modifying a car to adapt it better for different racing conditions. That evolution of the car was renamed to Nissan GTP ZX-Turbo. The name was marking a class (GTP) and a connection with 300 ZX road-legal car.

After skipping Daytona 24h, the Nissan GTP ZX-Turbo made a debut during the second round of the 1986 IMSA GT Championship, at the streets of Miami. Elliott Forbes-Robinson, Tony Adamowicz and Don Devendorf finished in 10th place with #83 Electramotive’s car.

Later in the season, a string of problems hit the team, with accidents and mechanical failures, but some notable results were also recorded. The highlight of the season was Geoff Brabham’s third place with a #83 car at Portland’s race.

Other good results were 7th at Mid-Ohio, 4th at Sears Points and 5th at Columbus. Nissan finished the season in seventh place among manufacturers. Elliott Forbes-Robinson was 27th and Geoff Brabham was 33rd in drivers’ standings.

In 1987, the team again skipped the season-opening at Daytona 24h, returning to the streets of Miami for the second round of the championship in March. The car was improved during a winter testing and drivers of #83 Nissan proved that, by winning the race ahead of Porsche 962. Drivers were Geoff Brabham and Elliott Forbes-Robinson.

It was a short-lived success as Nissan/Electramotive recorded DNF in the next two rounds at Road Atlanta and Riverside. Later in the season, David Hobbs was 5th at Laguna Seca. Brabham and Forbes-Robinson finished sixth in the season-closing race at Del Mar Fairgrounds Circuit. At the end of the season, Nissan was fifth among manufacturers. 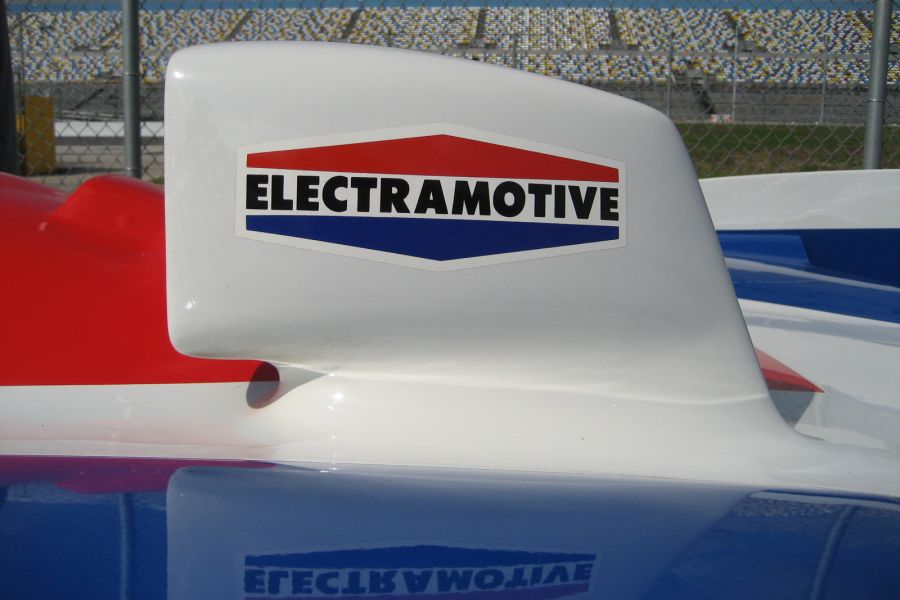 Electramotive was building own chassis in 1988

During 1987, three more T810 chassis were constructed by Lola and adapted by Electramotive. The modifications to the cars would eventually extend to the point that Electramotive would begin to construct their own chassis to replace the older cars, no longer relying on Lola.

A total of five Electramotive-built tubs were completed in 1988. Electramotive was renamed to Nissan Performance Technology Inc. (NPTI) in 1990.

Nissan GTP ZX-Turbo reached its first great success in the third season of the competition, winning nine races and securing drivers’ title for Geoff Brabham in the 1988 IMSA GT Championship. Although GTP ZX-T was a dominant car during the season, Electramotive’s decision to skip Daytona 24h and Sebring 12h allowed Porsche to take one more manufacturers’ championship title with only three wins.

The first win of the season for Geoff Brabham was at Road Atlanta, with John Morton as a co-driver in the #3 car. After that, Brabham was driving the #83 car, scoring seven wins in a row (Palm Beach, Lime Rock Park, Mid-Ohio, Watkins Glen, Road America, Portland, Sears Point).

At Portland’s round, on July 31, Nissan/Electramotive fielded two cars for the first time, scoring a 1-2 victory with Geoff Brabham in the #83 car and John Morton in the #84 car. Brabham scored his ninth and final win of the season at the penultimate round at Columbus Street Circuit. He finished the championship-winning season with a 46-point advantage over Jaguar’s John Nielsen. Brabham’s teammate John Morton finished ninth in the points. 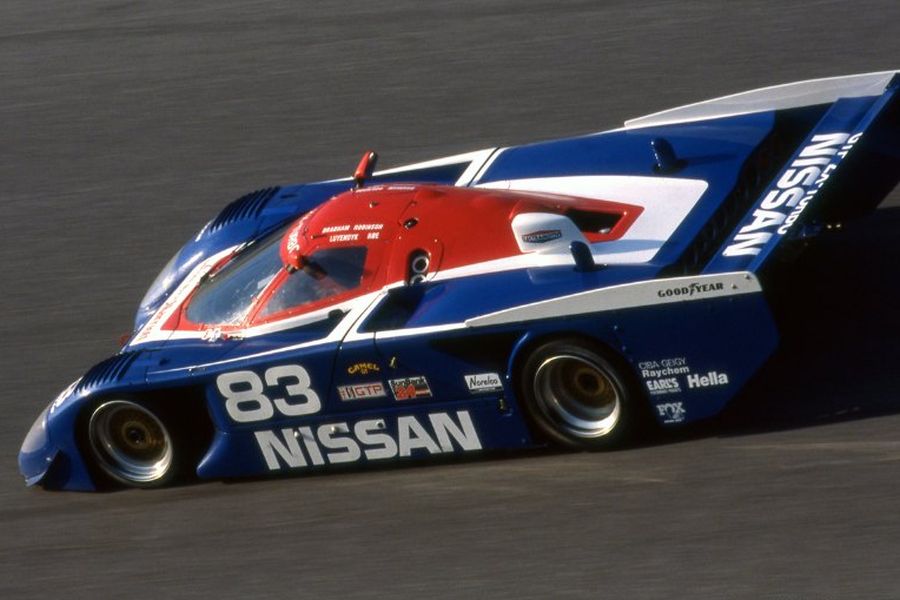 Nissan was skipping endurance races because of reliability issues but in 1989, they participated at Daytona 24h and Sebring 12h because they wanted to take manufacturers’ title. The reliability was a problem at Daytona, where neither car managed to finish the race at Daytona. In the sprint race at Miami, Geoff Brabham and Chip Robinson easily took the victory.

And then, at Sebring, the #83 Nissan GTP ZX-T surprisingly won the race, with Geoff Brabham, Chip Robinson and Arie Luyendyk driving. They defeated Jaguar XJR-9 of John Nielsen and Price Cobb by two laps. 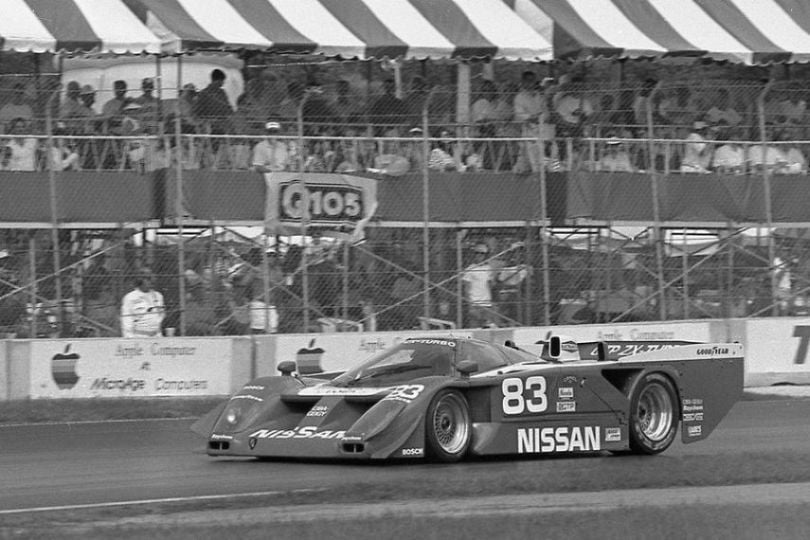 For the 1990 IMSA GT season, the company was renamed to Nissan Performance Technology Inc. (NPTI), continuing to use GTP ZX-Turbo while developing a new car NPT-90. Besides Nissan’s team, Busby Racing fielded one car in the championship. The Daytona 24-hour race was again unsuccessful, with all three cars retiring.

Nissan started a victorious streak at Miami, with Geoff Brabham, Chip Robinson and Bob Earl in the #83 car.  In March 1990, Nissan scored a double victory at Sebring 12 hours. Derek Daly and Bob Earl were the winners in the #83 car, with Chip Robinson and Geoff Brabham finishing second in the #84 car. Busby Racing’s #67 also gained a good result, finishing fifth, with Kevin Cogan and John Paul Jr at the wheel.

Defending both championship titles in 1990

With six more wins later in the season, both Nissan and Geoff Brabham defended their titles. Chip Robinson was again second in the standings. Among manufacturers, Nissan took the championship title again.

In the sixth round of the champion, at Heartland Park Topeka, the Nissan NPT-90 debuted, with Derek Daly and Bob Earl driving it. A new car scored its first win at Mid-Ohio, with Brabham and Daly as the winners, ahead of Robinson and Earl in the GTP ZX-Turbo. The next win for the NPT-90 followed at Watkins Glen, where factory-entered ZX-T competed for the last time. Busby Racing continued to use ZX-T until the end of the season. 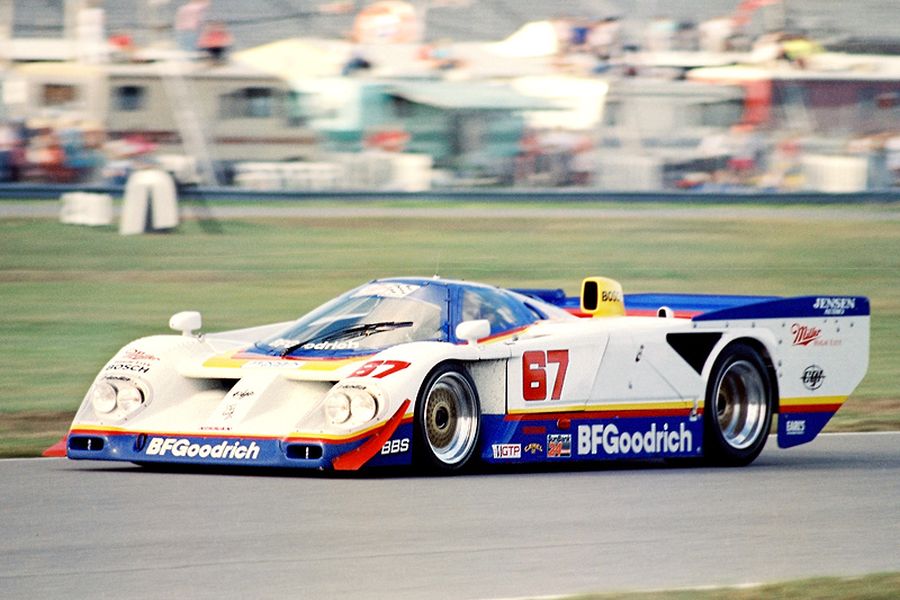 With five championship titles on its account, one of the most successful Japanese cars in the history of American sports car racing retired in 1991, although some private teams had a few occasional appearances with cars in the US and Europe.

John Shapiro’s team fielded GTP ZX-Turbo in the fourth round of the 1991 IMSA Championship at Miami, with Gary Brabham finishing 13th. In Europe, Team Alucraft was using one car in selected races of the Interserie championship, without notable results.

The Japanese company had a successful successor, as NPT-91 won fourth consecutive drivers’ championship title for Geoff Brabham and third consecutive constructors’ title for Nissan in 1991.