The Scandinavian Raceway, also known as Anderstorp Raceway, is a race track in Sweden that once upon a time was hosting the Formula 1 Swedish Grand Prix. Formula One Championship came to Anderstorp six times between 1973 and 1978.

A unique combination  of a race track and an airport

An idea of a race track and airport in one facility was born in the summer of 1965 when three local racers Sven “Smokey” Åsberg, Åke Bengtsson and Bertil Sanell, wanted to have a race track for test rides. The first idea was to build a short 1.5 km track but then they decided to ask local businessmen to help them build a longer track with an airport. An airport would help their isolated town to have a daily connection with Stockholm and will bring prosperity to the local community. 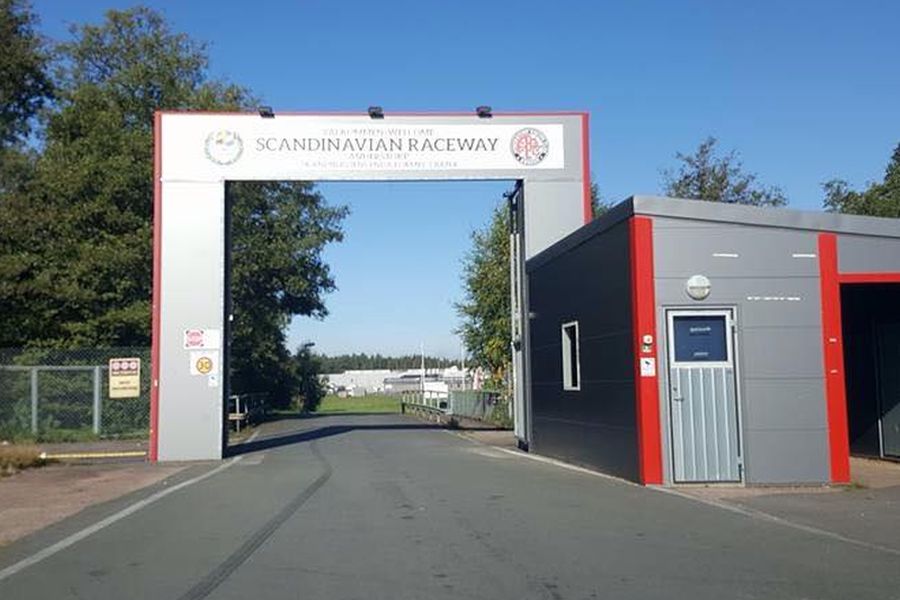 Scandinavian Raceway opened its door in 1968

In 1966, an idea became a project. Two years later, a project became a race track. The layout of the race circuit was designed by engineer Holger Eriksson, advised by famous Swedish racer Joakim Bonnier.

The original four-kilometer circuit had eight slightly banked curves and a long back straight on which was the airfield runway. Unusually, the pit area was separated from the start/finish line. The pits were between turns five and six.

The Scandinavian Raceway circuit was officially opened on June 16, 1968, with an international sportscar race, won by Jo Bonnier in a Lola T70-Chevrolet. 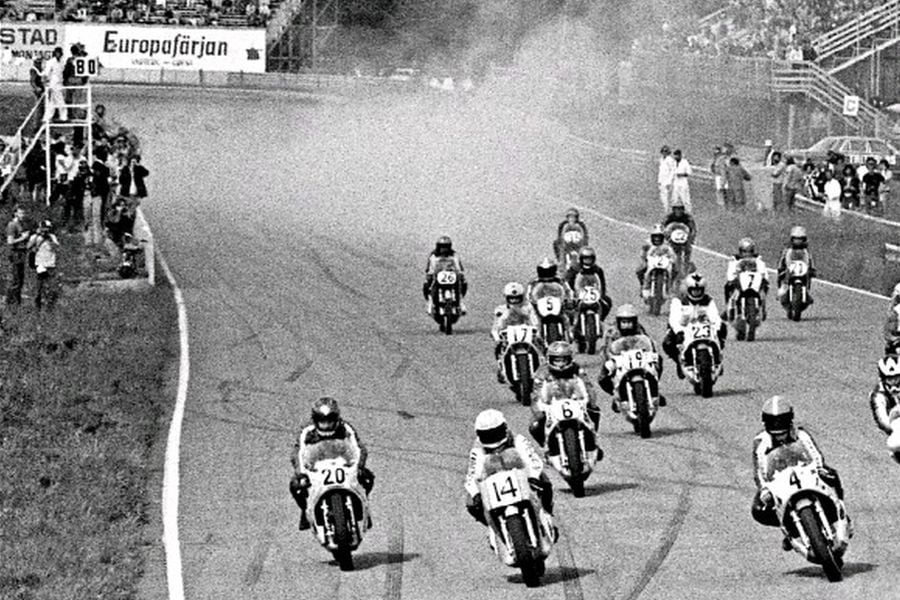 In the following period, sports car races took place at Anderstorp, then Formula 5000 came in 1970 and, in 1971, the World Motorcycle Championship was the first top-class competition at new Swedish race track. Giacomo Agostini won two races in 500cc and 350cc classes with MV Agusta, later taking world championship titles in both classes.

Swedish Motorcycle Grand Prix took place at Anderstorp seven years in a row, until 1977, and then again from 1981 to 1990. Giacomo Agostini has won one more time in top class (500cc) but the record holders with four 500cc wins are Barry Sheene and Eddie Lawson. 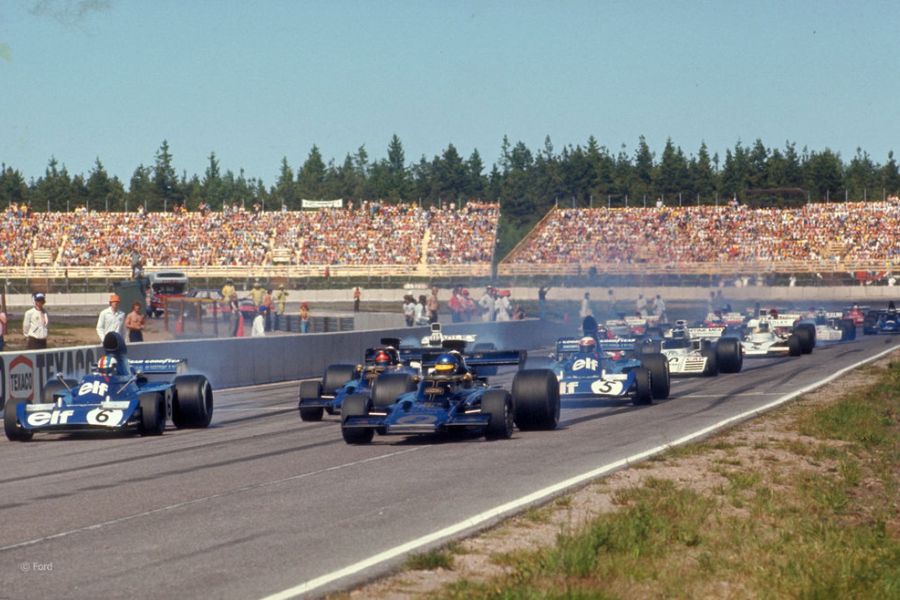 Formula One came to Anderstorp in 1973

After some minor modifications were made to the pit lane area in 1972, Sven Åsberg announced that he has a contract for the Formula One Swedish Grand Prix at Anderstorp from 1973. The arrival of Formula 1 coincided with the rise of Swedish ace Ronnie Peterson, who was an F1 vice-champion in 1971 with March and moved to Lotus for the 1973 season.

Although the circuit is located far from big cities and there were no lot of sleeping facilities, the crowd was big at the inaugural F1 Swedish Grand Prix which took place on June 17, with more than 50,000 spectators around the track. Ronnie Peterson delighted home fans with pole position (lap time 1.23.810) and led for most of the race, losing a victory on the penultimate lap to Denny Hulme (McLaren). Francois Cevert (Tyrrell) completed a podium. 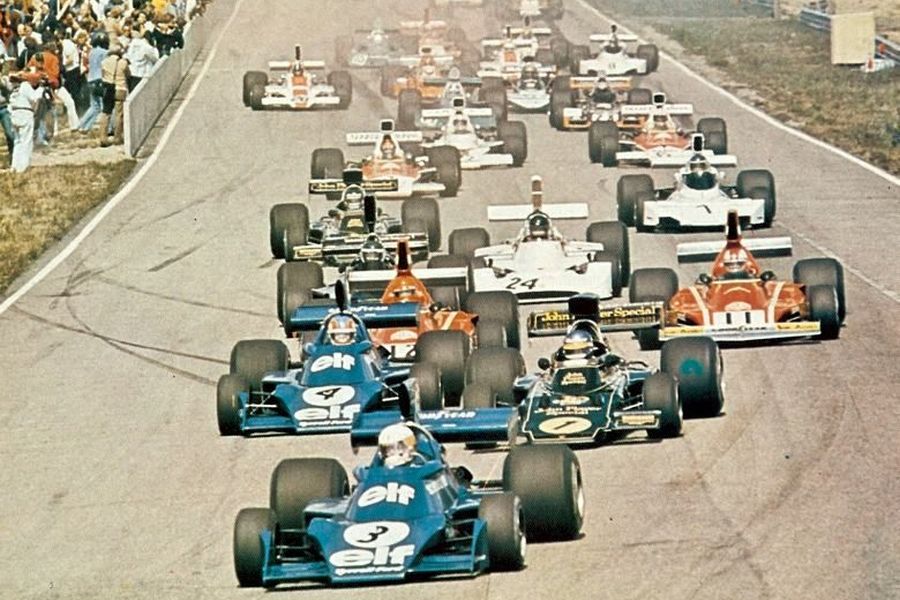 In 1974, Tyrrell’s drivers dominated at Anderstorp. Patrick Depailler was the fastest qualifier in the #4 Tyrrell 007-Cosworth but he finished second behind his teammate Jody Scheckter in the #3 car. It was Scheckter’s maiden F1 victory. James Hunt was third in the #24 Hesketh. 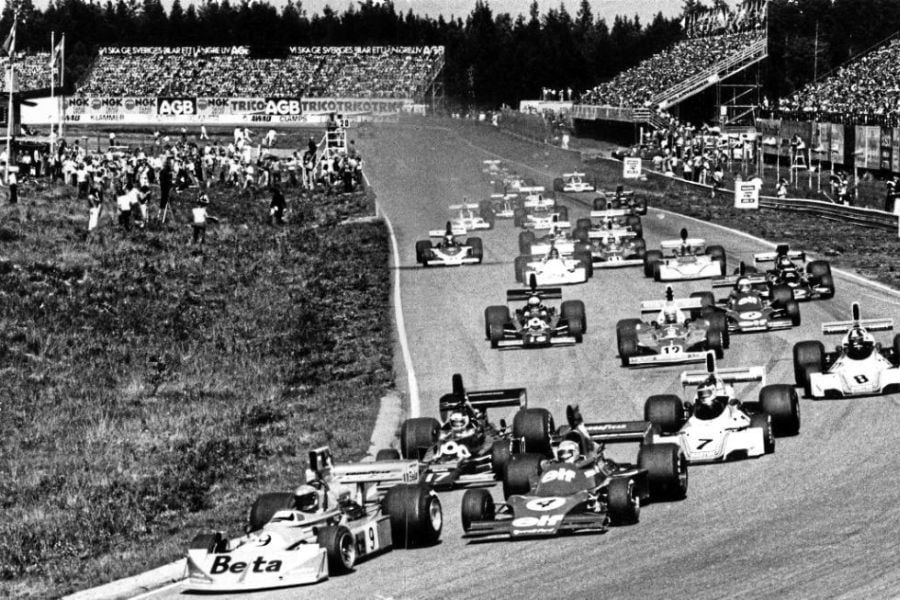 Start of the 1975 Swedish Grand Prix

In 1975, Vittorio Brambilla was the fastest qualifier but Niki Lauda won the race in the #12 Ferrari 312T. It was his third win in a row that season. Later in the season, he added two more wins to his account and won his first championship title. 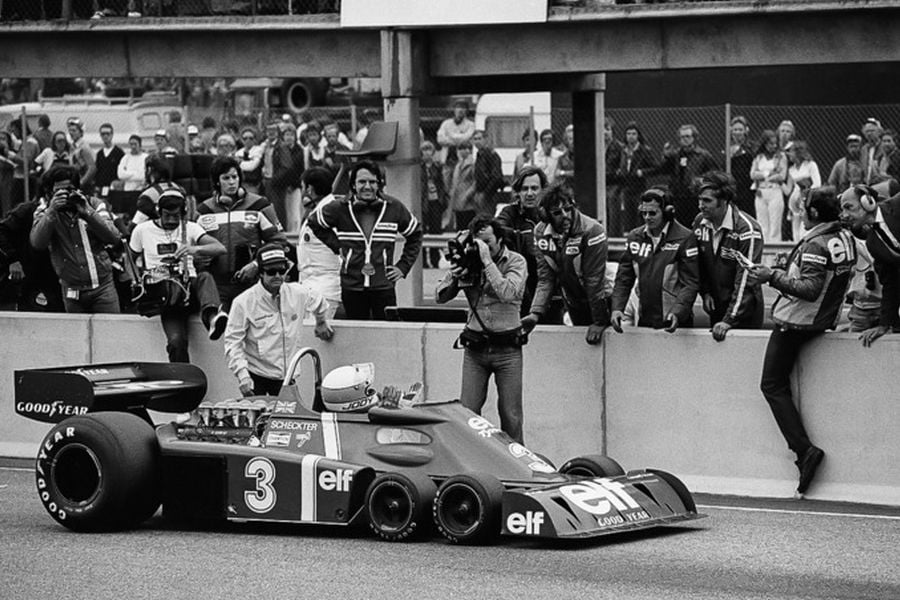 Jody Scheckter after his win at 1976 Swedish Grand Prix

At the 1976 Swedish Grand Prix, we saw the second Swedish victory for Jody Scheckter but the race was marked by the first and only victory of a six-wheel F1 car, the Tyrrell P34. Schecker was the fastest qualifier and converted his starting position into a victory, in front of his teammate Patrick Depailler in another P34. Niki Lauda completed a podium in a Ferrari.

French triumph at Anderstorp in 1977

Jacques Laffite was the winner of the 1977 F1 Swedish Grand Prix in the #26 Ligier-Matra. It was a special victory for France because that was the first time that French driver won a race in a French car with French engine and backed by a French company. 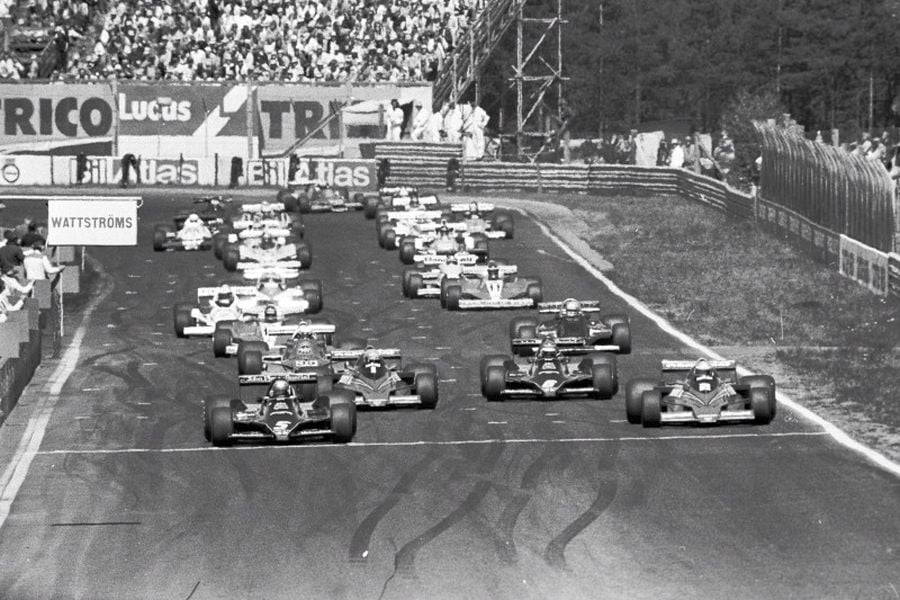 Start of the 1978 Swedish Grand Prix

Two years after a victory of unique Tyrrell’s six-wheeler, another unique and controversial car triumphed at 1978 Swedish Grand Prix. It was the Brabham BT46B-Alfa Romeo, so-called ‘fan car’. The main feature was a large fan which drew air through the engine water radiator which was mounted horizontally over the engine. The fan also took ground effect to a higher level by sucking air from under the car, creating a partial vacuum and an enormous amount of downforce.

With such a car, Niki Lauda easily won the race. The controversial car never raced again. The podium of the 1978 Swedish Grand Prix was completed by Riccardo Patrese (Arrows) and Ronnie Peterson (Lotus). The Swedish driver reached his second podium in his home race, what turned out to be the last Swedish Grand Prix. 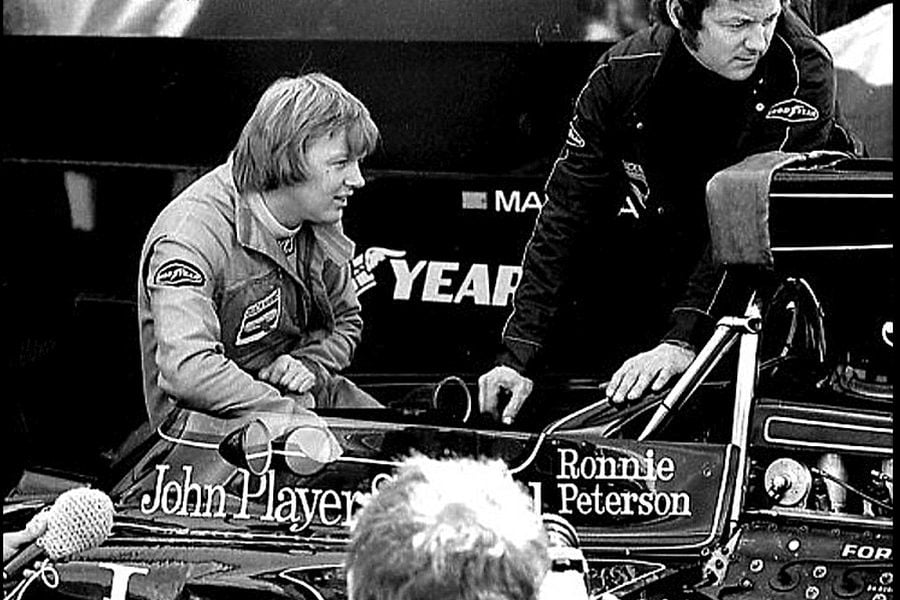 Ronnie Peterson at Anderstorp in 1974

Ronnie Peterson was in a fight for the 1978 championship title, winning two races and scoring five more podiums with Lotus until the unfortunate Italian Grand Prix at Monza in September, in which he was fatally injured. Despite his death, Peterson finished second in the 1978 F1 Championship.

The death of Swedish racing hero Ronnie Peterson, but also a death of Gunnar Nilsson in October from cancer, decreased an interest for races in Sweden and the Swedish Grand Prix was not a part of the F1 Championship in 1979.

Volvo won again in 1986 but the team was disqualified after the race, so the victory went to Gianfranco Brancatelli and Armin Hahne in a Rover Vitesse. In 1987, Winfried Vogt and Altfrid Heger won Anderstorp 500 in a BMW M3.

In the early 1990s, World Motorcycle Championship left Anderstorp after 1990 but the Superbike World Championship came in 1991. The winner of both races was the American Doug Polen.

The circuit underwent modernization in 1992, including a moving of the start/finish line close to the pits, between turns 5 and 6. Superbikes returned in August 1993, with two wins of Carl Fogarty.

Bankruptcy and a new beginning

In 1994, the major international event was the Interserie sportscar race. In 1995, the Anderstorp 4 Hours became a part of new BPR Global GT Endurance Series. The winners were Michel Ferte and Olivier Thevenin in a Ferrari F40 LM. Next year, Ferrari F40 GTE was a winning car, driven by Anders Olofsson and Luciano Della Noce. In 1998, International Sports Racing Series visited Anderstorp, with a victory of Ferrari 333 SP.

The FIA GT Championship, which had been established in 1997, visited Anderstorp two times, in 2002 and 2003. The winners were Jean-Denis Deletraz/Andrea Piccini in  Ferrari 550 Maranello (2002) and Jamie Campbell-Walter/Nathan Kinch in a Lister Storm (2003). 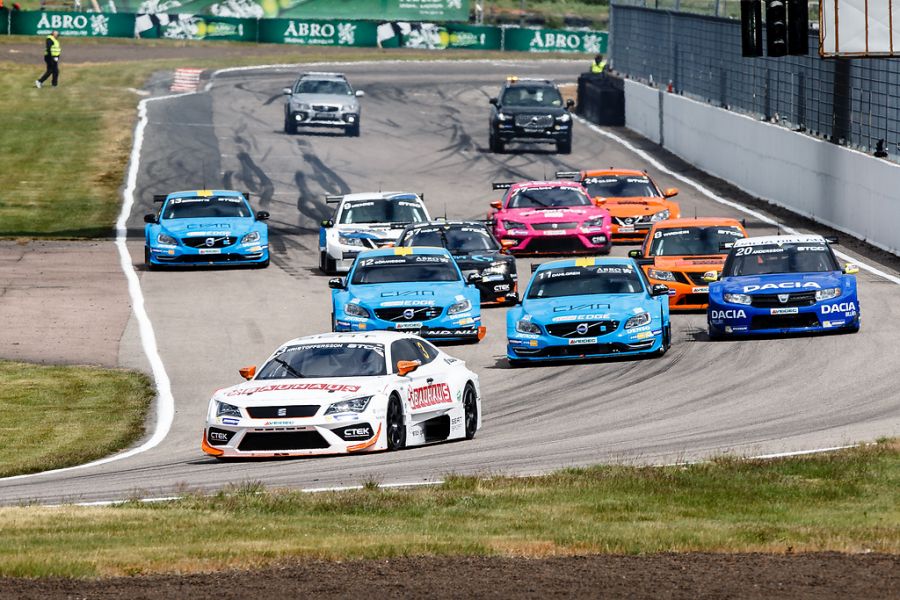 In 2007, following a renovation of pit garages in the previous year, Anderstorp hosted the Swedish round of the World Touring Car Championship. Rob Huff won the first race in a Chevrolet Lacetti and then Swedish driver Rickard Rydell triumphed in the second race with the same car. It was just a one-off WTCC appearance at Anderstorp, the World Championship didn’t return to Sweden since then.

The celebration of the 50th anniversary at STCC event

In the recent years, Anderstorp is hosting Swedish and regional races in different racing disciplines, from single-seaters and sports cars to touring cars. The main event is the round of the Scandinavian Touring Car Championship. 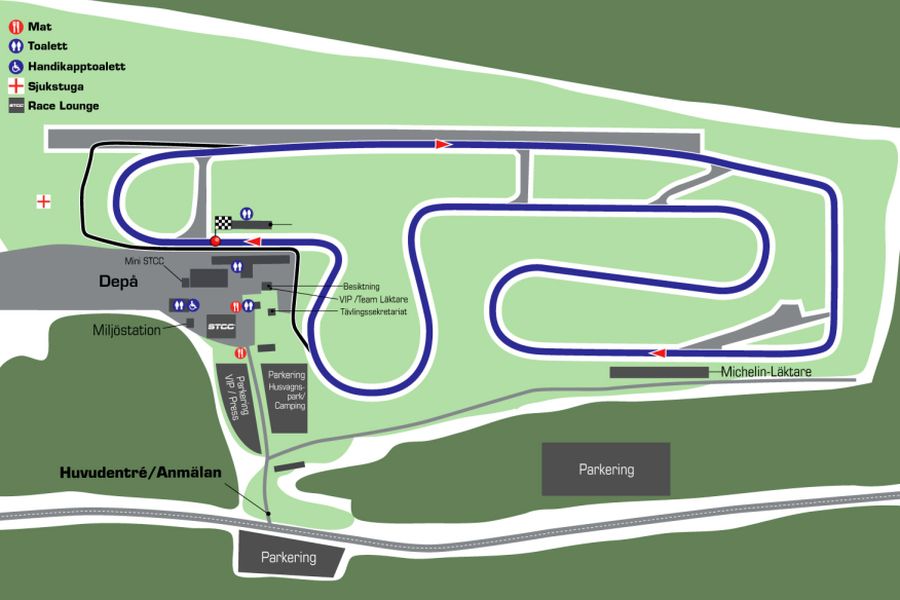