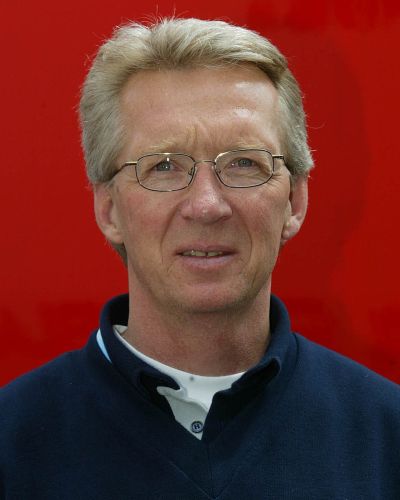 Early in a career, he was a two-time Swedish Formula 3 champion in 1977 and 1978. Then, he won three championship titles in Japan between 1989 and 1991, conquering the Japanese Touring Championship two times and Japanese Sports Prototype Endurance Championship once.

Olofsson was successful in several major endurance races. He won Spa 24 Hours in 1991 in a Nissan Skyline R32 GT-R. A year later, with the same car, he finished third at Bathurst 1000. At 24 Hours of Le Mans, Olofsson was second overall and first in the GT1 class in 1997, driving a McLaren F1 GTR.

Born in March 1952, Anders Olofsson started his racing career in the early 1970s, first in the Formula Ford and then in Formula 3. He was the European F3 vice-champion in 1977, winning three races in a Ralt-Toyota and losing a title to Piercarlo Ghinzani. That year, Olofsson triumphed in the Swedish Formula 3, winning all five races and taking the championship title.

In 1978, Olofsson repeated both results, finishing again as a runner-up in the European championship and taking a national title. He ended F3 Europe's season tied in points with a champion Jan Lammers.

In 1978, Olofsson also made two starts in the World Championship for Makes with BMW Sweden/Bo Emanuelsson Racing, driving a Group 5 BMW 320i at Mugello and Nurburgring. In 1979, Olofsson stayed in Formula 3 but also made one start in the Formula 2 with BMW Junior Team. He added two more Formula 2 starts in 1981, driving his own March 792-Hart. 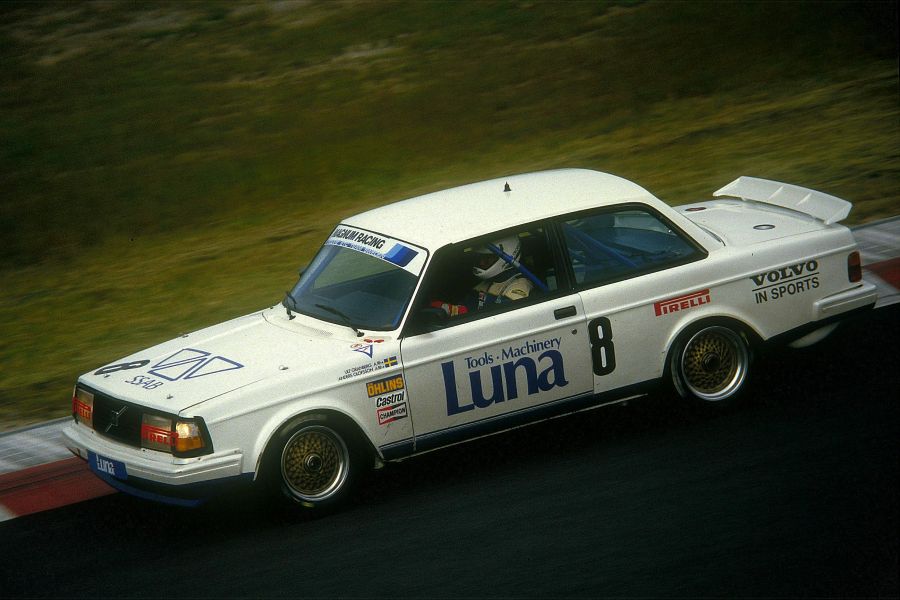 Driving a Volvo 240 Turbo in the European Touring Car Championship

In 1982, Olofsson recorded a couple of starts in the European Touring Car Championship in a Volvo 240 Turbo. In 1983, he participated in two ETCC races and then, in 1984, he spent his first full season in the ETCC, driving a Volvo for Swedish team TL Racing alongside Thomas Lindstrom.

In 1985, Olofsson stayed in a Volvo 240 Turbo but drove for Magnum Racing, sharing a car with Ulf Granberg. He scored his maiden ETCC win at Brno Grand Prix. In 1985, Olofsson also participated in few races of the FIA World Endurance Championship with different teams (Strandell Motors, Cosmik Racing).

The season 1986 was his last with Volvo in the ETCC. He was driving for RAS Sport, scoring few podiums. He finished 12th at Spa 24 Hours in the #1 Volvo 240 Turbo which he was sharing with Johnny Cecotto and Mauro Baldi. He and Cecotto also won at Zolder.

Olofsson moved to Japan, becoming a part of Nissan's crew in prototype racing. He spent a season in the Japanese Sports Prototype Championship with Person's Racing, driving the #8 Nissan R86V. He also made Le Mans debut with that car, sharing it with Alain Ferte and Patrick Gonin. They retired after 86 laps.

That year, Olofsson joined Bastos Toyota Team at Spa 24 Hours, driving the #15 Toyota Supra 3.0i but he didn't finish the race. 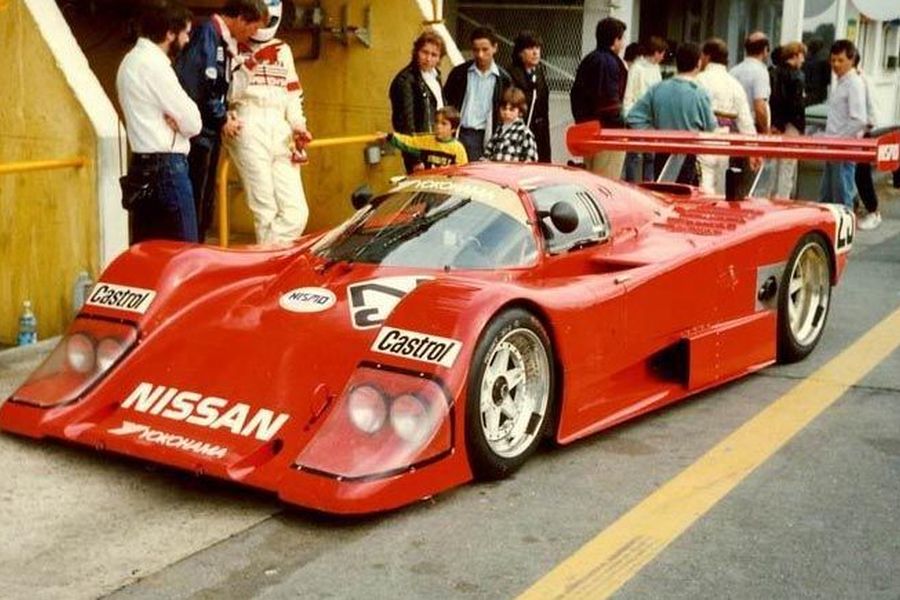 Anders Olofsson's car in his Le Mans debut in 1987

Racing with Nissan Skyline since 1988

Outside Japan, Olofsson recorded one more DNF at Le Mans in a March 88S-Nissan prototype and finished sixth at Spa 24h in a Nissan Skyline GTS-R, sharing a car with Allan Grice and Win Percy. In 1988, Olofsson also raced in Australia with Nissan, making a debut at Sandown 500 and Bathurst 1000.

In 1989, Olofsson had a similar schedule, driving a Nissan R88C in the Japanese Sports Prototype Championship (13th) and March 88S-Nissan at Le Mans (DNF).

He was most successful in touring car races, winning the Japanese Touring Car Championship together with Masahiro Hasemi. They were driving a Nissan Skyline HR31 GTS-R. Driving the same car, he finished fourth at Bathurst 1000, sharing a ride with George Fury.

In 1991, Masahiro Hasemi and Anders Oloffson were again the best in the Japanese Touring Car Championship, winning three races and taking the championship title in a Nissan Skyline R32 GT-R.  The 'Godzilla' was also a victorious car at 1991 Spa 24 Hours. Olofsson scored that win together with David Brabham and Naoki Hattori in the #25 Team Zexel car.

In prototype racing, Olofsson was without wins and finished sixth in the Japanese championship, driving a Nissan R90CP or Nissan R91CP. At Le Mans, he recorded fifth consecutive DNF in a Cougar C26S-Porsche which he was driving for Courage Competition.

In 1992, Olofsson left prototype racing, participating in the Japanese Touring Car Championship only. He scored two wins in the #55 Nissan Skyline GT-R, together with Takayuki Konishita, to finish third in the championship points.

Outside Japan, Olofsson retired at Spa 24 Hours and returned to Bathurst 1000, scoring his best result in the greatest Australian race. He finished third in the #2 Winfield Team Nissan Skyline GT-R, sharing a car with Neil Crompton. Their teammates Mark Skaife and Jim Richards won the race.

Racing with five different cars in 1993

The season 1992 was the last full season for Olofsson in some championship. In 1993, he tried many different race cars in different competitions. He was driving Strandell's Porsche 911 Carrera RSR in the Italian GT Championship and Ferrari F40 in the non-championship Vallelunga 6 Hours. In Japan, he recorded one start with Team Impul's Nissan Skyline and one start with Hitotsuyama Racing's BMW M3.

At 1993 Bathurst 1000, he stayed with Gibson Motorsport/Winfield Racing but the team switched from Nissan to Holden VP Commodore. He and David Brabham finished fourth in the #2 Holden. 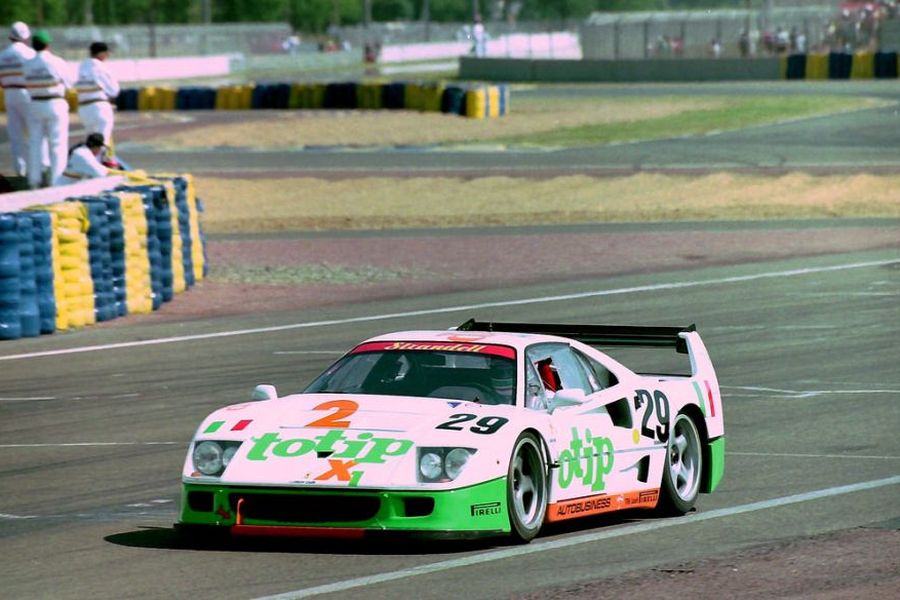 Anders Olofsson raced a lot in a Ferrari F40

In 1994, Olofsson came to Circuit de la Sarthe with Strandell/Obermeier Racing squad, together with Max Angelelli and Sandro Angelastri. They were driving the #29 Ferrari F40, retiring after 51 laps.

Outside Le Mans, Olofsson raced with Ferrari in the Global GT Championship, finishing sixth in the points in 1996 with one victory (Anderstorp).

Two more starts at Bathurst 1000 in a Holden

While racing with Ferrari in GT competitions, Olofsson traveled to Australia for two more starts at Bathurst 1000, both times with Winfield Racing's Holden Commodore. In 1994, he and Colin Bond finished sixth.

In 1995, what was Olofsson's last race at Mount Panorama Circuit, he finished fourth together with Steven Richards in the #2 Holden VR Commodore.

Although he was already near the end of his career in 1997, the 45-year-old Anders Olofsson was still capable to export big results. He scored one of his greatest achievements at 1997 Le Mans 24 Hours, finishing second overall and the winner of GT1 class in the #41 Gulf Team Davidoff McLaren F1 GTR. His partners were Pierre-Henri Raphanel and Jean-Marc Gounon.

That season, Olofsson was driving a McLaren F1 GTR in the FIA GT Championship, scoring a podium (3rd) at Suzuka 1000 Kilometers. Olofsson also recorded a brief return to the Japanese GT Championship, driving a Ferrari F355 for Team Ferrari Club of Japan in three races.

Two more starts at Spa 24h in a Nissan Primera

Olofsson retired from professional racing and slowed down his racing activities in 1998, participating in two Japanese GT Championship races and returning to Spa 24 Hours, where he was driving Nissan Primera for Belgacom Nissan Turbo Team. Sharing a car with Vincent Vosse and Anthony Reid, he didn't finish the race.

Olofsson had a similar schedule in 1999, participating in one Japanese GT race and at Spa endurance race. He finished fifth at Fuji GT race in a Nissan Skyline GT-R, sharing a car with Erik Comas. At 1999 Spa 24 Hours, he retired in a Nissan Primera which he was sharing with Alain Cudini and Didier Defourny.

Olofsson's last race in a career was the Daytona 24 Hours in February 2000. He was driving the #28 Yellow Magic Ferrari F355, don't finishing the race.