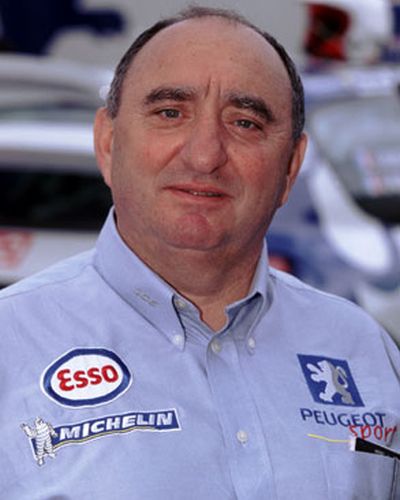 Jean-Pierre Nicolas is a French racing legend who left his mark in the world of rally as a driver, team principal and sporting manager. He has four Manufacturers' WRC titles in his CV.

Nicolas started his rally career in 1965. Between 1973 and 1984, he recorded 40 WRC starts, 5 wins and 13 podiums. In 1973, he was one of three drivers who led Alpine-Renault to the first Manufacturers' world championship. He won three more Manufacturers' titles from 2000 to 2002 as a chief of the Peugeot Sport.

Jean-Pierre Nicolas at the beginning of his career

Jean-Pierre Nicolas was born on January 22, 1945, in Marseille. His father Georges was also a rally driver, so for Jean-Pierre, it was a natural thing to become a rally driver. After being a co-driver to his father at 1963 Mistral Rally in Dauphine 1093, Jean-Pierre started to drive rally cars in 1965. It's interesting that one of his first co-drivers in the Renault 8 Gordini was Henri Pescarolo.

Becoming the professional with Alpine-Renault

Besides rallying, Nicolas was hired to represent Renault-Alpine at the world's biggest endurance race, the 24 hours of Le Mans. He debuted at Circuit de la Sarthe in 1968, sharing the #55 Alpine A210 with Jean-Claude Andruet. They finished 14th overall and third in P1.3 class.

Next year, Jean-Pierre Nicolas and Jean-Luc Therier were sharing a very powerful car in P3.0 class, the Alpine A220 with 3.0 V8 engine, but they retired after 160 laps due to engine failure.

Successful partnership with Jean Todt as a navigator

Jean-Pierre Nicolas is flying with Alpine-Renault in Portugal

For the 1973 season, when the World Rally Championship for Manufacturers was founded, Alpine-Renault had four strong French drivers (Jean-Claude Andruet, Jean-Pierre Nicolas, Jean-Luc Therier and Bernard Darniche) so the press called them the Musketeers.

The season started with a 1-2-3 win for Alpine-Renault at Rallye Monte-Carlo, with Nicolas in the third place. Later in the season, he was second in Portugal, third in Greece, third in Sanremo and finally scored his first WRC win at Tour de Corse in November. The French manufacturer captured the first WRC title.

A dominance of the Italian manufacturers (Fiat, Lancia) started in 1974 and Alpine-Renault finished in fifth place. Nicolas reached two WRC podiums, with Renault 17 Gordini in the USA and with Alpine-Renault A110 1800 in Corsica. That year, he was the winner at Rallye du Maroc and Rallye d'Antibes.

In 1975, Jean-Pierre's only WRC podium was the second place at Tour de Corse. He won two ERC events, finishing 9th in the points.

The season of 1976 started with Rallye Monte-Carlo, which was Jean-Pierre's last event with Alpine-Renault. Later in the season, he was combining Peugeot 504 and Opel Kadett GT/E. In June, Nicolas scored his third win at Rallye du Maroc, which was part of the World championship that year.

The season of 1977 was the worst in Jean-Pierre's career, as he participated in five international events and didn't finish any of them. He was driving four different cars throughout the year (Opel Kadett, Peugeot 504, Ford Escort and Renault 5 Alpine).

1978 - Monte Carlo victory and second place in the championship

After a bad season in 1977, the career-best season followed in 1978. In January, Nicolas triumphed at Rallye Monte-Carlo with Porsche 911. Two months later, he won Safari Rally with Peugeot 504 V6 Coupe. The third win of the season followed at Rallye Cote d'Ivoire in October, again with Peugeot 504. Nicolas became one of only two drivers in the history who won three African WRC events.

The second is Hannu Mikkola, who finished third in the FIA Cup for drivers, one place behind Jean-Pierre Nicolas. The best driver in the world that year was Markku Alen.

Jean Todt and Jean-Pierre Nicolas in 1983

In 1979, which was the first year of the World Rally Championship for drivers, Nicolas participated in five WRC events, finishing only one. He was sixth at Rallye Monte-Carlo with Porsche Carrera RS. The start of the new era in the world rallying was the end of Nicolas' career.

From 1980 to 1983, he raced occasionally and then returned to the WRC for the last three events with factory-entered Group B Peugeot 205 Turbo 16. He competed with that car at Tour de Corse, Acropolis Rally and Rallye Sanremo, scoring points two times. He finished fourth in Corsica and fifth in Sanremo.

It was the first season for Peugeot 205 T16 and Jean-Pierre was acting as a development driver, hired by Peugeot Talbot Sport chief Jean Todt, his former navigator. Fifteen years later, in 1999, Nicolas became the leading person of Peugeot's sport department.

It was a time when many manufacturers were entering the World Rally Championship with new WRC-spec cars. The season of 1999 was a debut year for the Peugeot 206 WRC.

Jean-Pierre Nicolas with Richard Burns in 2002

In 2000, Jean-Pierre Nicolas led the Peugeot Esso team to the double triumph in the World Rally Championship. Marcus Gronholm became the drivers' champion, the team beat Ford and Subaru for its third manufacturers' title in a history.

In 2001, Peugeot was a victorious team again, among the drivers the best was Subaru's driver Richard Burns. Burns joined Peugeot in 2002, helping the team to take its third consecutive title. In the drivers' classification, Peugeot's driver Marcus Gronholm was again on the top.

Leading roles in the sporting management

Nicolas was leading the team for two more seasons, finishing second in 2003 and fourth in 2004. In March 2005, Nicolas joined the management board of Peugeot and stayed there until August 2006.

In 2007, Nicolas was appointed by FIA to be a supervisor and development manager of the new series, the Intercontinental Rally Challenge. The competition lasted until 2012 when it was merged with the European Rally Championship. Nicolas then became the Sporting Manager for the ERC.