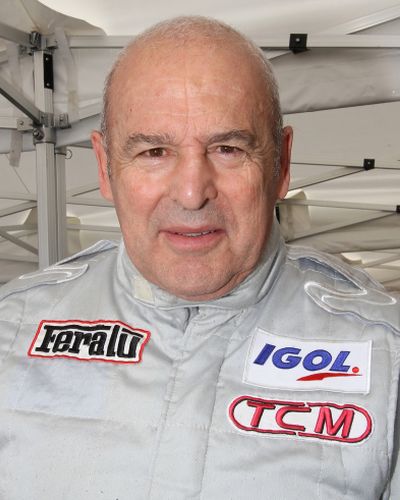 Jean-Claude Andruet is a rallying and racing legend from France who was one of the world's best rally drivers in the 1970s but he also gained some success in circuit racing.

Jean-Claude Andruet was born on August 13, 1942, in Montreuil, a suburb of Paris. He started racing in 1966 with Renault 8 Gordini, using that car both in rallying and circuit racing.

In July 1966, he participated for the first time at 24 Hours of Spa, finishing in the 15th place. His teammate was Jean-Francois Piot.

Switching to Alpine-Renault in 1967

In January 1967, he debuted at Rallye Monte-Carlo with Renault 8 Gordini. During a year, he was also using Alpine-Renault A110 in some events, scoring his first wins in some national events. 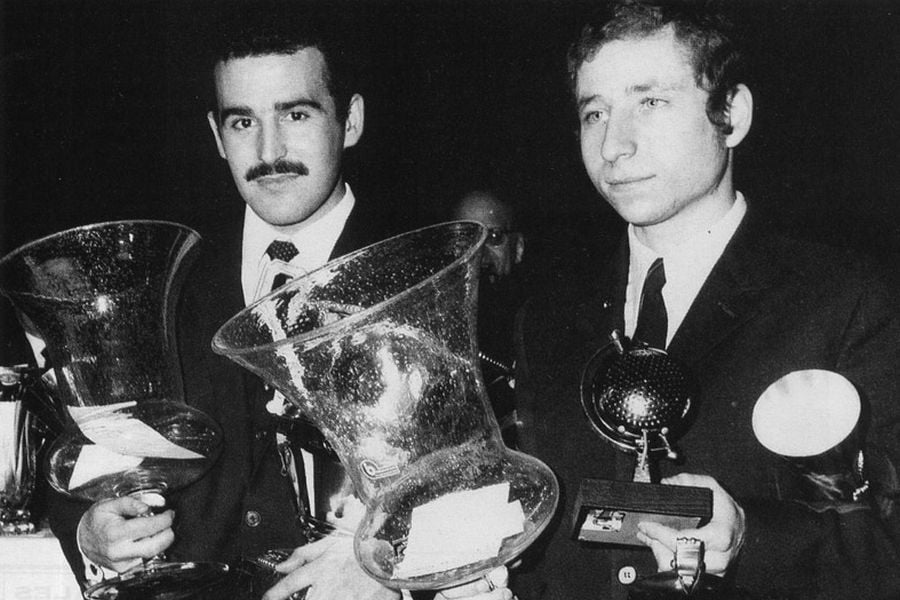 Jean-Claude Andruet and Jean Todt in 1968

Jean Todt was navigating Andruet in 1968

In 1968, Jean Todt became Andruet's navigator in some rally events. They participated together at 1968 Rally Monte-Carlo in an Alpine-Renault A110, not finishing the race. In November 1968, Andruet scored a victory at Tour de Corse.

In circuit racing, he participated at 24h Le Mans with Alpine A210, sharing a car with Jean-Pierre Nicolas. They finished 14th overall and third among P1.3 crews.

In 1969, Andruet scored some wins in minor rally events with Alpine-Renault A110. At the major events, he was second at Coupe des Alpes and retired at Rallye Monte-Carlo.

He also retired at 24 hours of Le Mans, where he was sharing the #30 Alpine A220 with Henri Grandsire. They stopped after 48 laps.

Andruet scored his greatest success with Alpine-Renault A110

In that time, European Rally Championship and International Championship for Manufacturers were the main rally competitions. In 1970, Andruet proved that he was one of the world's best drivers and he won the ERC title, winning five ERC events with Alpine-Renault A110.

At the Rallye Monte-Carlo, which was a part of the International Championship, he was excluded. In the circuit racing, Andruet joined Guy Ligier in few races, including 24h Le Mans, where they retired in the Ligier JS1.

In 1971, Andruet recorded his best Rallye Monte-Carlo to date, finishing in the fourth place with Alpine-Renault A110 1600. At 1971 Tour de France, Andruet participated for the first time with Charles Pozzi's Ferrari 365 GTB/4 Daytona, finishing in the 10th place. At 1971 Le Mans 24 Hours, Andruet didn't reach the finish again. He was driving a Porsche 910 together with Christian Poirot.

In 1972, Andruet returned to Tour de France with Ferrari. This time, he and his navigator Biche (Michele Espinosi-Petit) were the race winners. It was one of three wins in the European Rally Championship. Other two wins were at Tour de Corse and Rallye Lyon-Charbonnieres-Stuttgart-Solitude with Alpine-Renault A110 1800.

In June 1972, the #39 Ferrari 365 GTB/4 became a winning car at 24 hours of Le Mans. Andruet and his teammate Claude Ballot-Lena finished fifth overall and the best among GT crews, beating several other Ferraris.

A month later, Andruet participated at another endurance race, the 24 hours of Spa, with Autodelta Alfa Romeo 2000 GTV. He and Jean Ragnotti finished in the 10th place.

Winner of the first ever WRC event

The season 1973 started with Andruet's participation at Rallye Monte-Carlo. He and Biche won the race with #18 Alpine-Renault A110 1800 ahead of two more Alpine Renault crews.

It was Andruet's only event in the inaugural WRC season in which his team won the championship title. Later in the season, he participated in two rally events with Lancia Stratos HF, retiring at both events.

In February 1973, Le Mans winners Ballot-Lena and Andruet traveled to America to participate at Daytona 24 hours race. They were driving North American Racing Team's #23 Ferrari 365 GTB/4 but didn't reach the finish. Their teammates in the #22 car finished second overall and took the GT +2.0 class victory.

During the year, Andruet had diverse schedule of races, driving several different cars in different championships. In May, he and Sandro Munari finished second at Targa Florio with Lancia Stratos HF. At 24h Le Mans, he and Richard Bond were 20th in a Ferrari of Ecurie Francorchamps.

In 1974, Andruet continued to drive Lancia Stratos HF in rally events. He and Biche were very successful, scoring few wins. The highlight of the season came in December when Andruet scored his second WRC victory at Tour de Corse. Driving the #2 Lancia, he beat four Alpine-Renaults.

At 24 hours of Le Mans in June 1974, Andruet was driving Ferrari 312 P for NART, sharing a car with Teodoro Zeccoli. They finished in the ninth place. 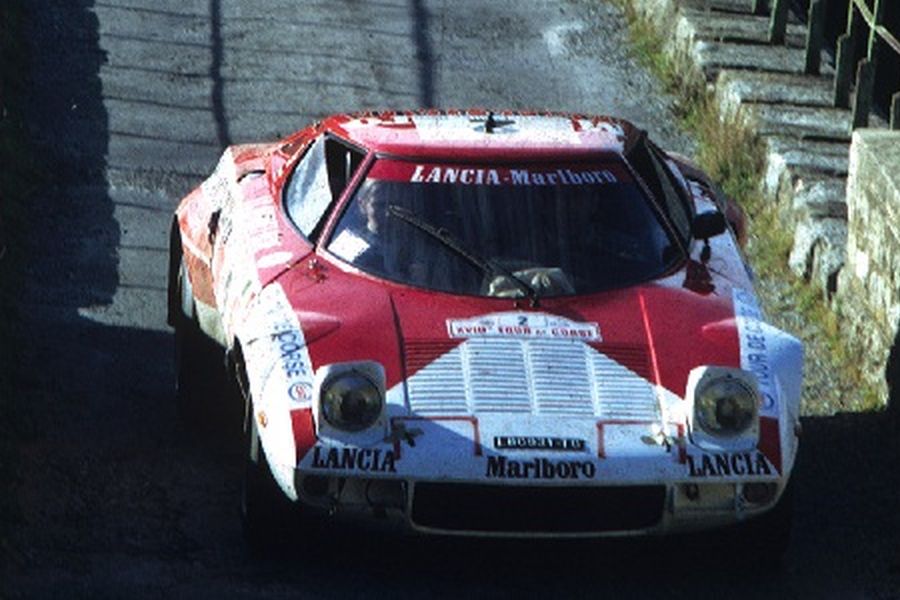 Andruet was driving variety of race cars in 1975

The season 1975 started with an accident at Rallye Monte-Carlo, where Andruet was driving Lancia Stratos HF. Later during the season, he was driving Alfa Romeo Alfetta GT, with third place at Tour de Corse as the best result.

In circuit racing, he was fifth at Spa 1000 km with Ecurie Buchet's Porsche 911 Carrera RSR and 12th at 24h Le Mans with Ecurie Francorchamps' Ferrari 365 GTB/4. At 24 hours of Spa, Andruet was driving Alfa Romeo 2000 GTV to the fourth-place finish. One more car on his list was Alfa Romeo T33/3 at Giro d'Italia.

In 1976, the season started similarly as the year before, with an accident at Rallye Monte Carlo. This time, Andruet was driving an Alpine-Renault A310. Later in the season, he won Ronde Cevenole with Porsche 911 Carrera RSR.

The 911 Carrera was also his car at 1976 Le Mans 24 Hours. He was sharing the #53 car with Thierry Sabine and Philippe Dagoreau. They finished in the 13th place. At 24 hours of Spa, he and Spartaco Dini were second in the #32 Alfa Romeo Alfetta  GTV. 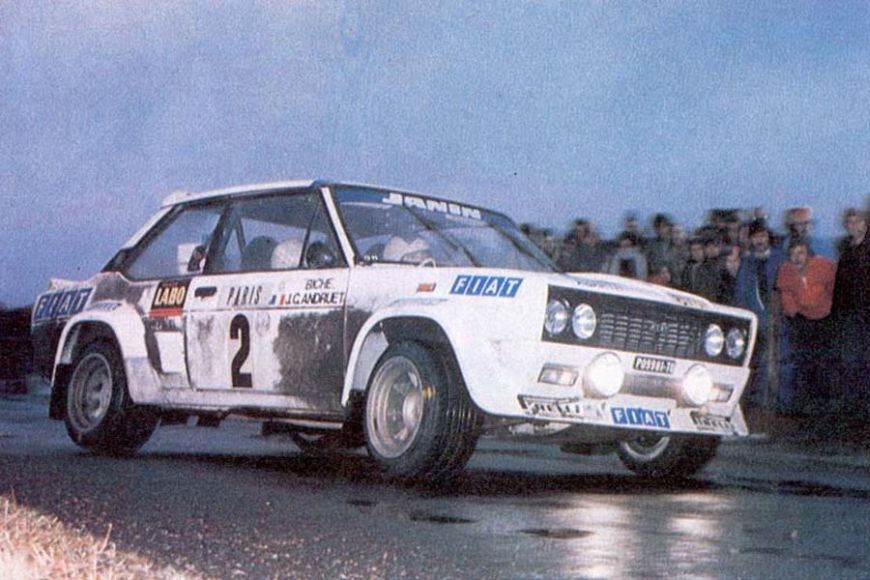 For the 1977 rally season, Andruet gets a new car, the Fiat 131 Abarth. He and Biche started a season with second place at Rallye Monte-Carlo, behind Lancia's Sandro Munari. Andruet participated in five WRC events that season.

In October, at Rally Sanremo, he scored his third WRC victory in a career. His navigator in the #9 Fiat 131 Abarth was Christian Delferrier. Andruet scored one more win in the ERC's Rally d'Antibes.

In circuit racing, the season 1977 will be remembered as the year when Andruet finally won the 24 hours of Spa. He was driving the #10 BMW 530i for Kinley BMW Castrol team together with Eddy Joosen.

In 1977, Andruet skipped 24h Le Mans. Of other races, he participated only at Giro d'Italia with Porsche 934, not finishing the race. 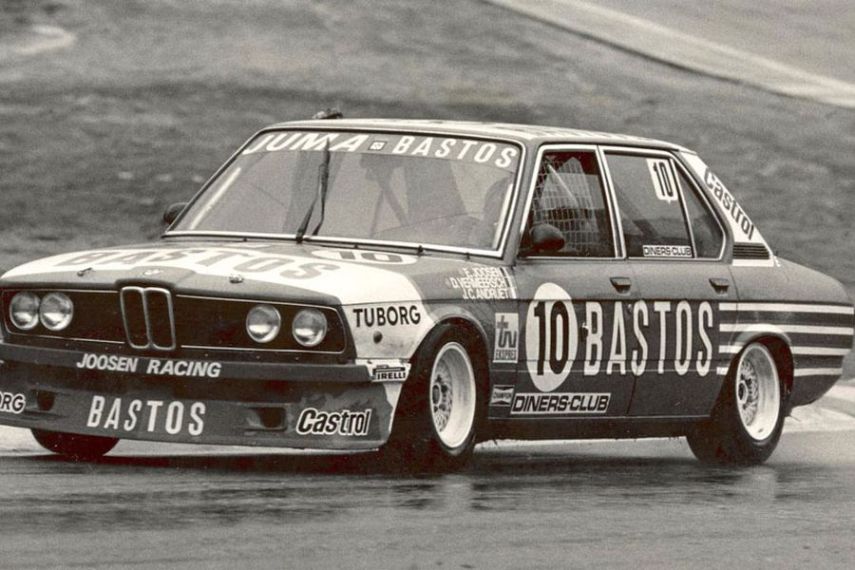 In 1978, Andruet scored WRC podium with Fiat 131 Abarth at Tour de Corse, finishing second behind Bernard Darniche in the same car. At Rallye Monte-Carlo earlier that year, Andruet was sixth.

In June 1978, Andruet returned to Le Mans. He was driving Ferrari 512 BB for Pozzi-Thompson JMC Racing, sharing a car with Spartaco Dini. They retired with a broken engine after 251 laps.

DNFs both at Daytona and Le Mans in 1979

In 1979, Andruet participated in more than ten rally events with Fiat 131 Abarth, including two WRC attempts. He finished 4th at Rallye Monte-Carlo and retired at Tour de Corse. It was the first championship when drivers' title was awarded, he finished 22nd in the points.

In sports car and touring car racing, Andruet participated in three major endurance races. At Daytona 24h and Le Mans 24h, he was driving a Ferrari 512 BB for JMS Racing-Pozzi. His crew retired in both events. At 24 hours of Spa, Andruet and Eddy Joosen finished second in a BMW 530i.

In 1980, what was Andruet's last year with Fiat 131 Abarth, he won few national rally events but scored disappointing results in the WRC events. He retired both at Rallye Monte-Carlo and Tour de Corse.

In circuit racing, Andruet and Claude Ballot-Lena were partners in two races for JMS Racing. At 24h Le Mans, they retired in a Ferrari 512 BB. At 24h Spa, Andruet reached one more podium, finishing third in a BMW 530i.

In 1981, Andruet was driving for Charles Pozzi in different competitions. In rallying, Andruet scored four ERC wins with Ferrari 308 GTB to finish second in the European Rally Championship.

At 24h Le Mans, he and Claude Ballot-Lena were driving Charles Pozzi's Ferrari 512 BB. They finished fifth overall and first in the IMSA GTX class. Andruet and Eddy Joosen were successful again at 24h Spa, finishing second in a BMW 530i.

In 1982, Andruet continued to drive Ferrari 308 GTB for Charles Pozzi, combining  ERC and WRC events. In May, at Tour de Corse, Andruet scored his seventh and the last WRC podium, finishing in the second place behind Jean Ragnotti in a Renault 5 Turbo.

In June 1982, Ballot-Lena and Andruet returned to Le Mans with Ferrari 512 BB, retiring after just 57 laps with broken engine. One more DNF followed at 1983 Le Mans race when Andruet was driving Lancia LC2 for Martini Racing. His partners were Paolo Barilla and Alessandro Nannini.

In the 1983 rallying season, Andruet was driving the Group Lancia 037 Rally. In two WRC events, at Monte-Carlo and Tour de Corse, he was a member of Lancia factory team Martini Racing. He finished 8th at Monte Carlo Rally. In the European Championship and French national events, he was driving for the Ecurie Total.

In 1984, Andruet continued to drive Lancia, for Martini Racing in the WRC events and for Total Chardonnet team in other events. His best WRC result was the sixth place at Tour de Corse. In the European Championship, he won two times at Rallye des Garrigues and Rallye du Var.

Return to Le Mans with WM-Peugeot

Andruet skipped 24h Le Mans in 1984 and returned to Circuit de la Sarthe in 1985, joining  WM-Peugeot to drive a WM P83B prototype along with Claude Haldi and Roger Dorchy. Their race lasted for 73 laps when they retired due to an accident.

In July 1985, Andruet entered Spa 24 Hours with BMW 635 CSi, sharing a car with Claude Ballot-Lena and Rene Metge. They ended a race in the 8th place.

Andruet in the Group B Citroën BX4TC at 1986 Swedish Rally

In the last two seasons of the Group B rally cars, Andruet participated in selected event driving for Citroën. At 1985 Rallye Monte-Carlo, he was driving Citroën Visa 1000 Pistes, finishing in the 8th place.

In 1986, Andruet participated in three WRC events with Citroën BX4TC, crashing out at Monte Carlo and Acropolis Rally. He reached the finish line at Swedish Rally, taking sixth place.

At the end of the 1986 WRC season, Andruet ended his professional career. Since then, he participated occasionally in selected national and historical events, returning to WRC one more time at 1995 Rallye Monte Carlo. He and Biche participated in the Austin Mini Cooper. 1989 - one more Le Mans class victory before ending a career

In the circuit racing, Andruet skipped Le Mans in 1986 and 1987, returning in 1988 with Chamberlain Engineering's Spice SE88C prototype. The car lasted just 17 laps. In 1988, Andruet also participated in selected raced of the European Touring Car Championship with Euro Luigi Racing's Ford Sierra RS500, with third place at Zolder as his best result.

And then, in 1989, Andruet scored one more class victory at Le Mans 24 Hours. He was driving the #113 Cougar C20B-Porsche for Courage Competition, sharing a car with Philippe Farjon and Shunji Kasuya. They finished 13th overall and the first in the C2 class, five laps ahead of closest rivals.

It was the last Le Mans attempt for Andruet and the end of his professional career. He returned to race tracks in 2001 to participated in four rounds of the French GT Championship for Team Kalliste, sharing a Porsche 996 GT3-RS with Caty Caly. 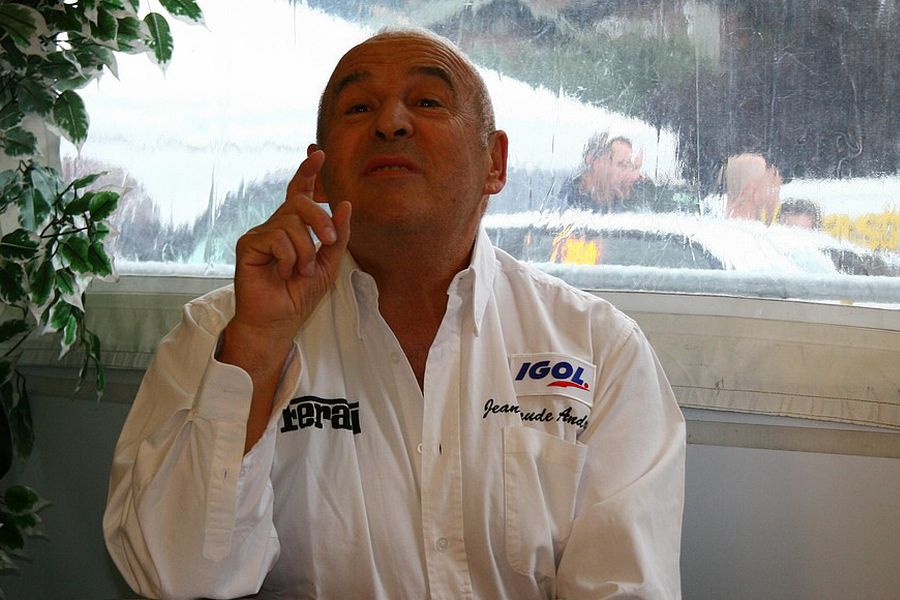