Monte Carlo Rally - the oldest rally race in the world

The Rallye Monte-Carlo is the oldest and the most popular rally race in the world. The event was established in 1911 by Prince Albert I and since then, its name became known not only in the world of motorsport but also in popular culture, business and the movie industry.

At the beginning of the 20th century, racing was reserved for nobility and the wealthy people, because owning a car was considered a luxury. After the Prince of Monaco, Albert I, asked the members of Automobile Club de Monaco, which was founded in 1890, to organize an international race in 1911, Rallye Monte-Carlo was born. 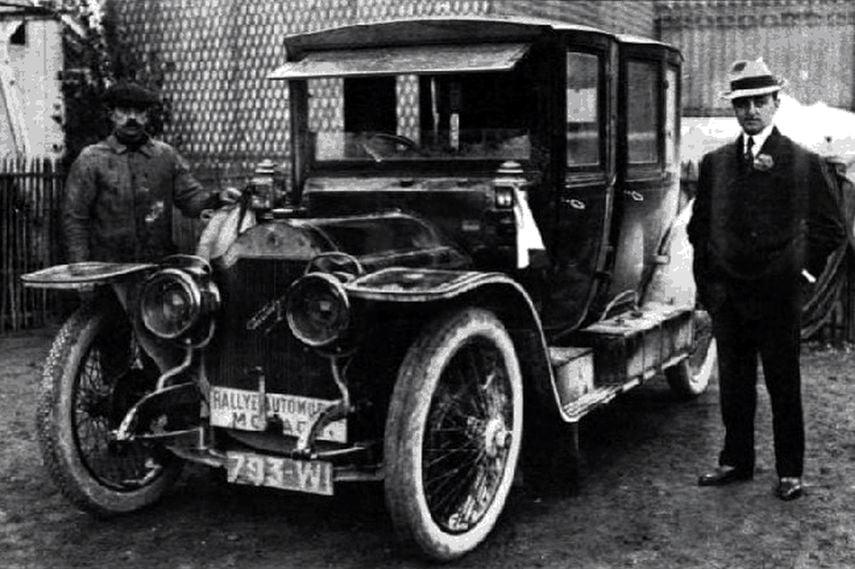 23 competitors at the first Rallye Monte-Carlo

The inaugural race had the drivers set off from eleven different European cities, with 23 competitors participating in the event. Nine of them started from Paris, and among them was the first winner – Henri Rougier. Driving Turcat-Mery 25HP, he traveled 1020 kilometres and appeared first at the finish line. There were some controversies about his victory, but the results became official and after the final standings was declared, he took the honors as the first ever Rallye Monte-Carlo winner.

Rougier will always be remembered as the first winner, but we will also mention Jules Beutler who finished third in the first race, but became the winner in the following year. The third edition of Rallye Monte-Carlo was held in 1924, and after that there were no interruptions until 1939 when World War II broke out. It’s also important to mention that the first Monaco Grand Prix was organised in 1929, also by Automobile Club de Monaco. 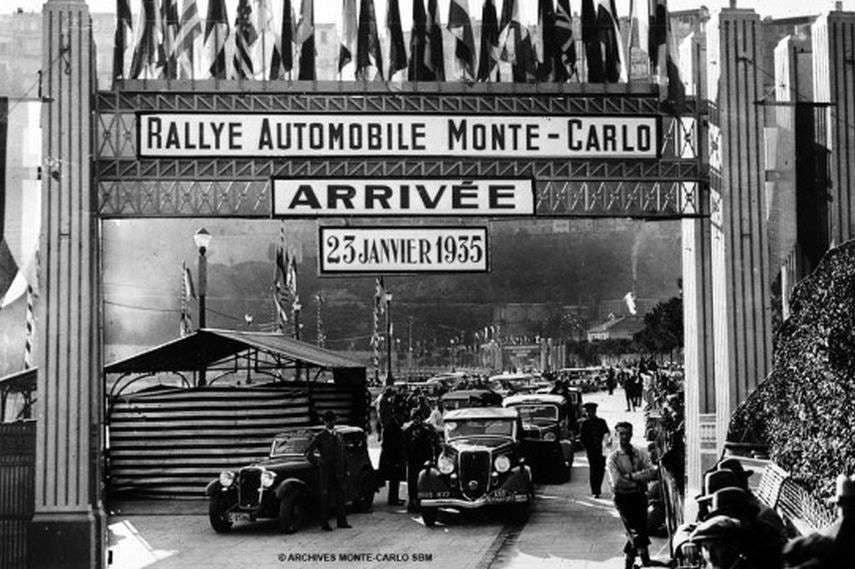 One of the rare photos from the 1935 Rallye Monte-Carlo

After the war, the race was revitalized in 1949, and since then it has been organised until today with only two interruptions – in 1957 and 1974, both times due to the global fuel crisis caused by wars. 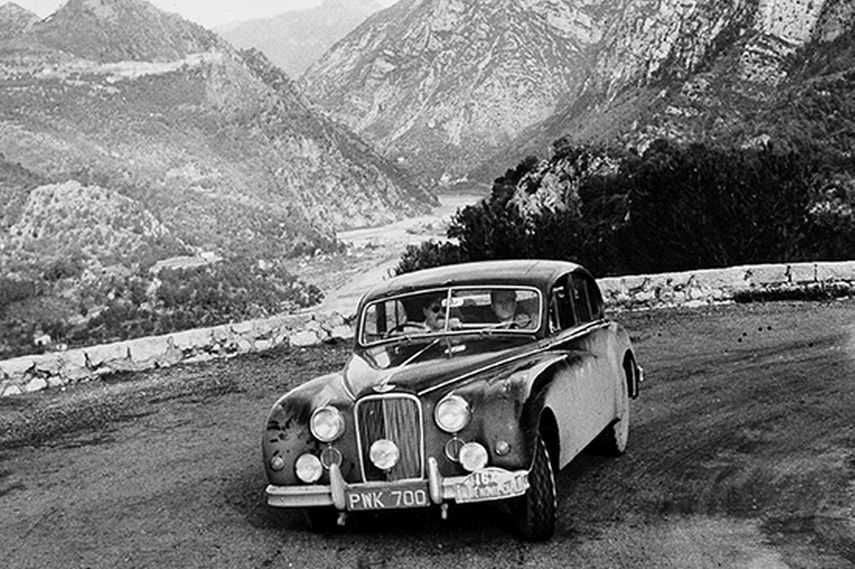 Mr. Saab marked the beginning of the modern era

Rallye Monte-Carlo winners in the early days didn’t achieve much popularity, so we could say that the modern era started in 1962, when Erik Carlsson won. He was one of the best drivers in the world at that time, and during his career he became globally popular.

One of his nicknames was Mr. Saab, because he competed exclusively with the cars of the Swedish manufacturer Saab. He was victorious with Saab 96 at Rallye Monte-Carlo two years in a row, in 1962 and 1963. In 1964 he finished third, behind the driver and the car which claimed the legendary status – Paddy Hopkirk and the Mini Cooper S. 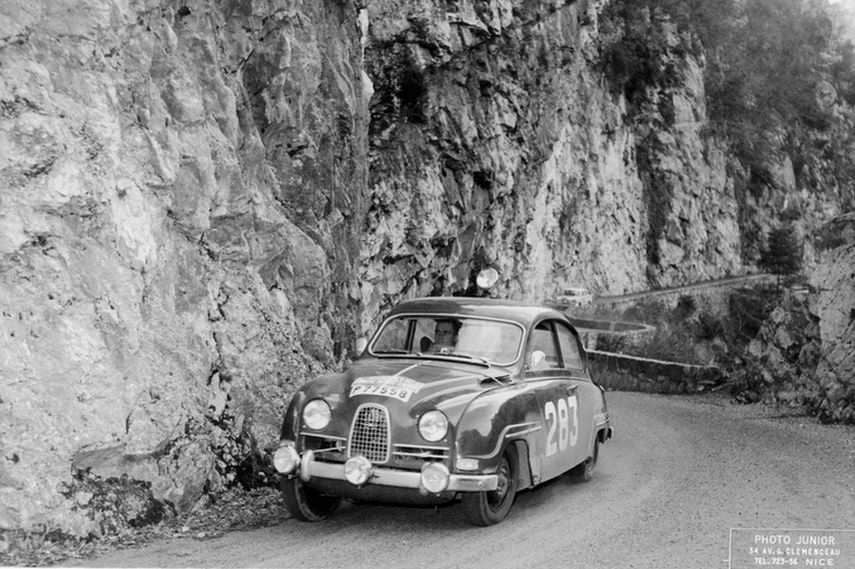 Three wins for Mini and one controversial exclusion

The 1964 Rallye Monte-Carlo is probably the most legendary edition of this popular race, because in that year the legendary Mini Cooper scored the first of its four victories. Well, officially it was three, because in 1966 ten cars were controversially excluded because of ‘wrong’ headlights, among them were three Minis which were undeniably the fastest. 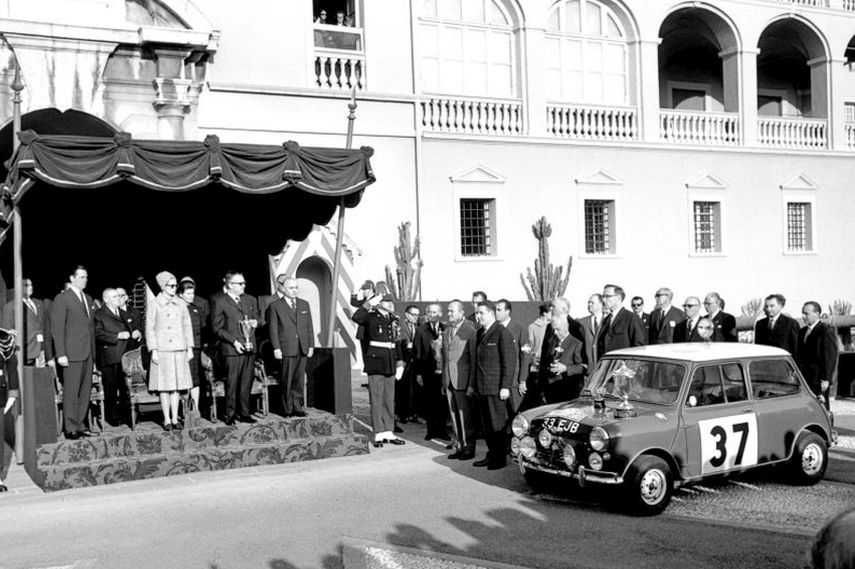 The prize ceremony at the 1964 Rallye Monte-Carlo, with the first victory for Mini

Andruet was the first winner in the WRC era

From 1968 to 1972, victories of Vic Elford, Bjorn Waldegaard (twice), Ove Andersson and Sandro Munari followed. The victorious cars were Porsche 911S, Alpine-Renault A110 and Lancia Fulvia.

The next milestone in the history of Rallye Monte-Carlo and world rallying was the 1973 season, because World Rally Championship had been established. 42nd edition of Rally Monte-Carlo was the first round of the championship and Jean-Claude Andruet was pronounced the winner. He was driving the Alpine-Renault A110 1800, same as the second placed Ove Andersson and third-placed Jean-Pierre Nicolas. 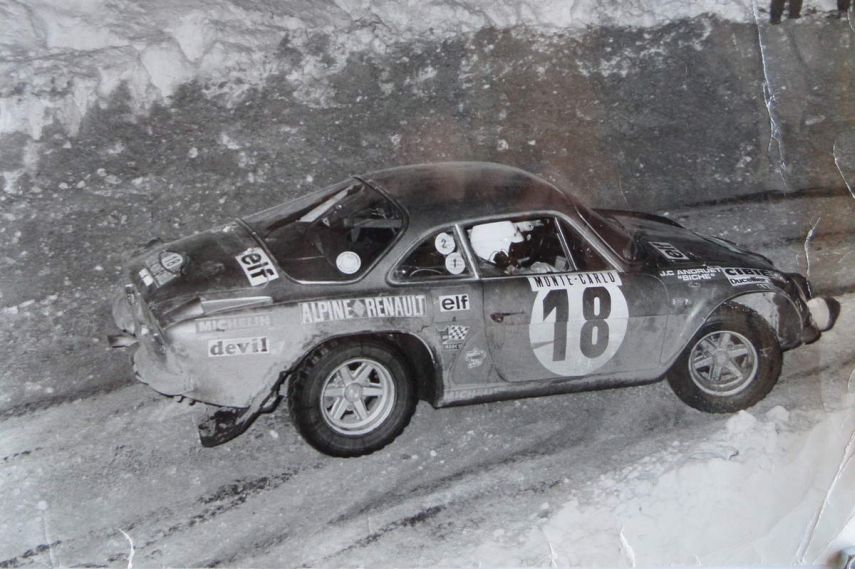 At this time, the Monte-Carlo rally was still structured as a concentration rally. Teams were beginning the competition in nine different cities, with the first objective to reach Monte-Carlo, followed by two legs of competitive special stages around Monaco and southeastern France. It was the form since the beginning of the rally.

After the 1974 cancellation, the master of the Rallye Monte-Carlo became Sandro Munari, who won three times in a row from 1975 to 1977. In all three occassions, the victorious car was Lancia Stratos HF. The domination of Munari and Lancia was stopped in 1978 when Jean-Pierre Nicolas and Porsche 911 claimed the victory. The following year, the winning car was once more Lancia Stratos, but this time driven by Bernard Darniche. 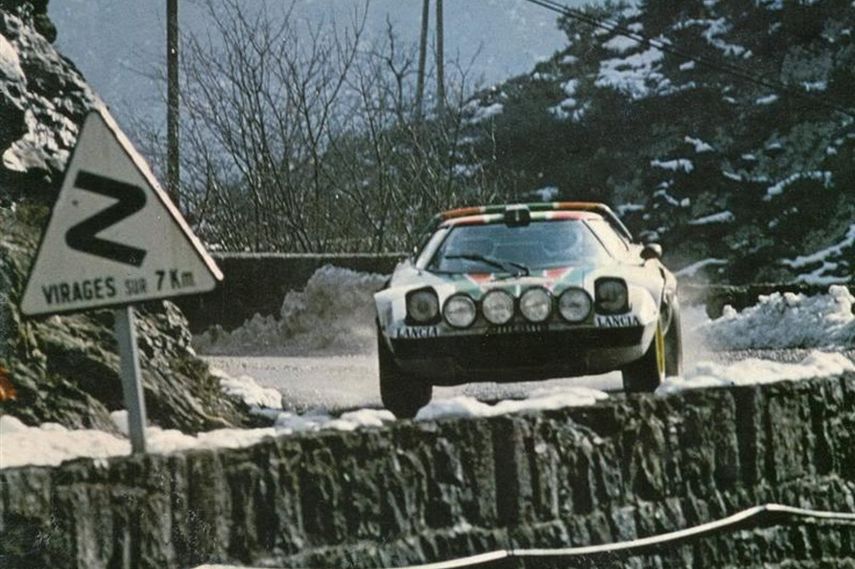 In 1985, Walter Röhrl finished second and Ari Vatanen scored his first and only Monte-Carlo victory. He was driving the Peugeot 206 Turbo 16. It was the time of the monstrous cars of Group B. Henri Toivonen, whose death caused the ban of Group B, achieved his last win of the career in Monte-Carlo. He was the winner of the 1986 Rallye Monte-Carlo with Lancia Delta S4. He was killed in the same car just a few months later at Tour de Corse. 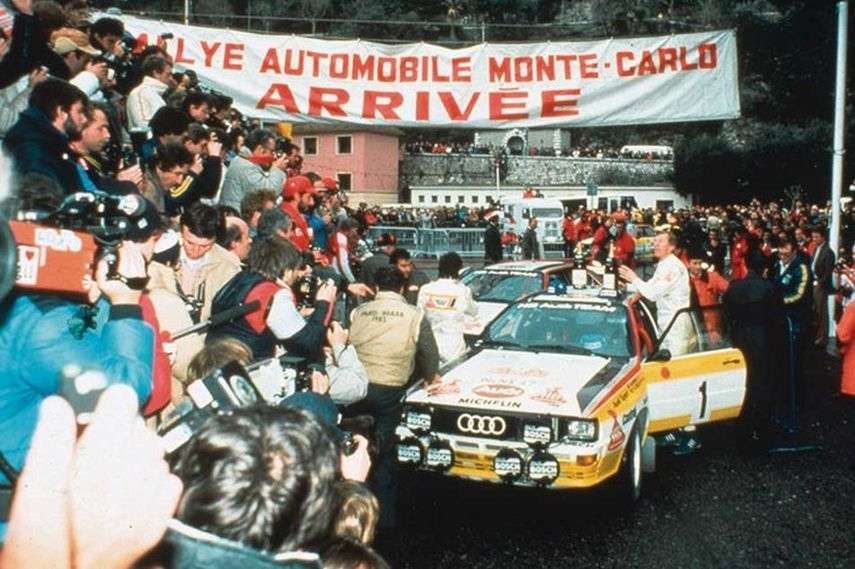 From 1987 to 1990, different versions of Lancia Delta (HF 4WD and Integrale) were victorious at Monte-Carlo, with Miki Biasion (twice), Bruno Saby and Didier Auriol as the winners.
In 1991, the winning car was Toyota Celica GT-Four and the driver was Carlos Sainz. Didier Auriol had won one more time with Delta Integrale in 1992, and scored his third win in 1993 with Toyota Celica Turbo 4WD.

In 1994, Francois Delecour achieved the first victory for Ford, driving an Escort RS Cosworth. In the 1995 season, which was a special one for Subaru World Rally Team, Carlos Sainz scored his second Monte-Carlo win driving the Subaru Impreza 555. In 1996, Patrick Bernardini (Ford Escort RS Cosworth) won the event which wasn’t a part of the World Rally Championship, but only a part of the FIA 2-Litre World Championship for Manufacturers. 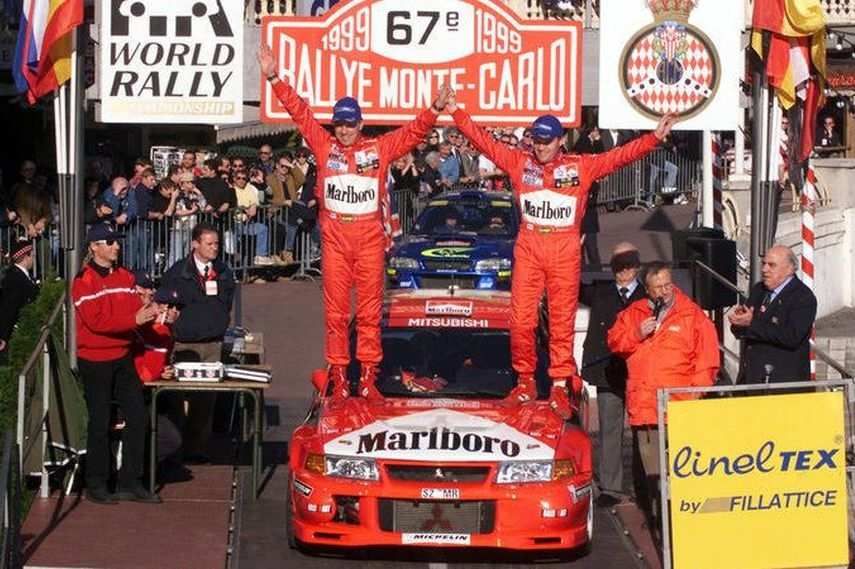 Four wins in a row for Tommi Makinen

From 1997 to 2002, the Japanese manufacturers ruled at Rallye Monte-Carlo. Piero Liatti won in 1997 with Subaru Impreza WRC, Carlos Sainz was the winner of the 1998 edition with Toyota Corolla WRC, and after that, Tommi Mäkinen had won four times in a row with Mitsubishi Lancer and Subaru Impreza.

The last Mäkinen’s win in 2002 was achieved after the provisional winner Sebastien Loeb got penalized on the last day because of illegal tire change. Sebastien Loeb had to wait another year for his first Rallye Monte-Carlo victory. 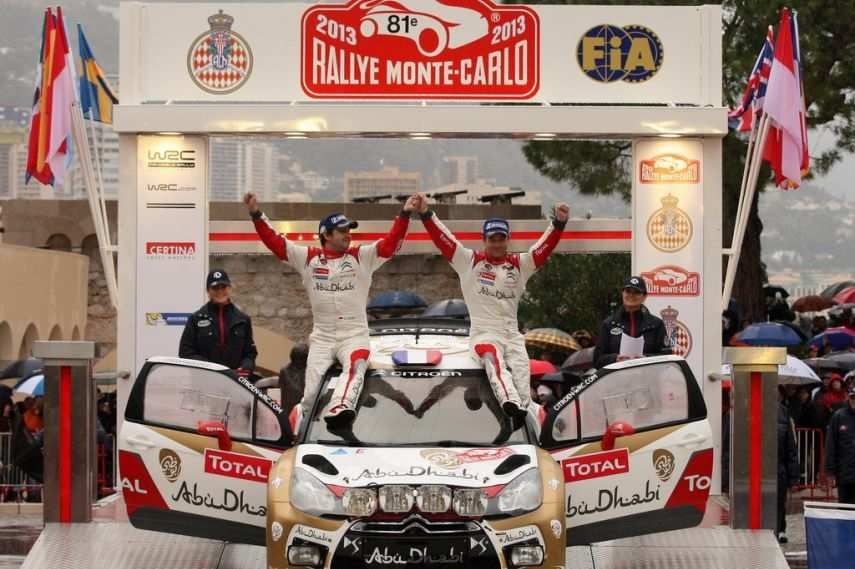 Sebastien Loeb scored seven Monte-Carlo wins, first in 2003, and the last in 2013

Loeb’s era begun in 2003 when he won with Citroen Xsara WRC ahead of team-mates Colin McRae and Carlos Sainz. From 2004 to 2008, he won four more times, always behind the wheel of a Citroen. Ford’s driver Marcus Gronholm took the victory from Loeb in 2006.

Record number of Loeb’s victories was increased to seven in 2012 and 2013 with two more wins for Citroen. In the meantime, Rallye Monte-Carlo got out of WRC and became a part of Intercontinental Rally Challenge from 2009 to 2011, reserved for S2000 cars. The winners in that period were Sebastien Ogier (Peugeot 207), Mikko Hirvonen (Ford Fiesta) and Bryan Bouffier (Peugeot 207). 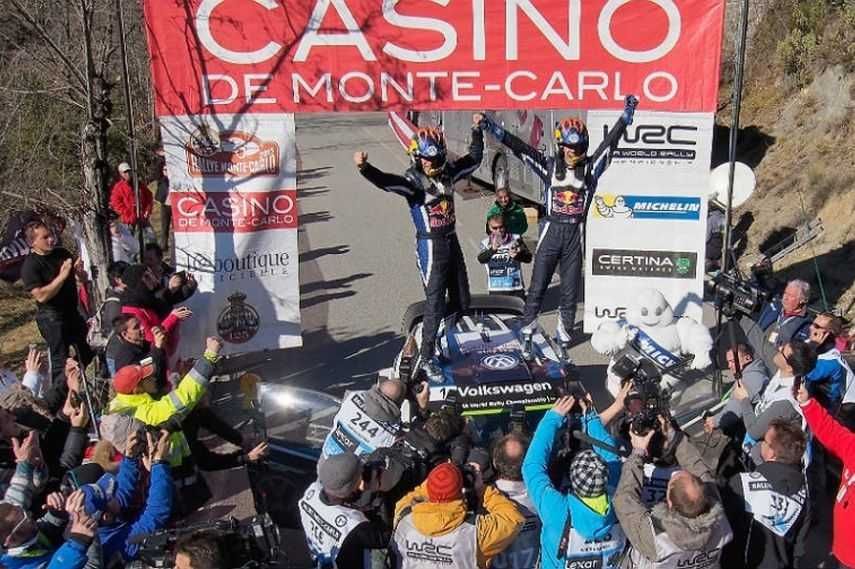 In 2014, an era of Sebastien Ogier begun. He scored three consecutive wins in 2014, 2015 and 2016 with Volkswagen Polo R WRC, also taking world championship titles in those seasons.

In 2017, Ogier changed a team and continued his winning streak with M-Sport’s Ford Fiesta WRC, taking the fifth victory and becoming the second most successful driver in the history of Monte Carlo Rally, leaving four-time winners Tommi Mäkinen, Sandro Munari and Walter Röhrl behind. One more Ogier’s victory with M-Sport Ford followed in January 2018.

In 2019, Ogier changed a team again, joining Citroen Racing, but it didn’t prevent him to win the Rallye Monte-Carlo again. Now, he’s tied on the top with Sebastien Loeb, both have seven victories on their accounts.

Some of the characteristics of the Rallye Monte-Carlo in its early days were tough weather and road conditions, because in the winter time on special stages there were always snow and ice combined with dry asphalt in the area of Monte-Carlo and southeast France, especially in the mountains around the city. These features turned Rally Monte-Carlo into an unpredictable and exciting event, with a challenging tire-gamble for every driver, so the winner can’t be predicted until the final stages.

After all these years, the cars remain very diversified, but the conditions of modern Rallye Monte-Carlo are the same as fifty or a hundred years before, and that makes this event so magical and beloved among drivers and spectators.