Indianapolis Motor Speedway - The Greatest Race Course in the World 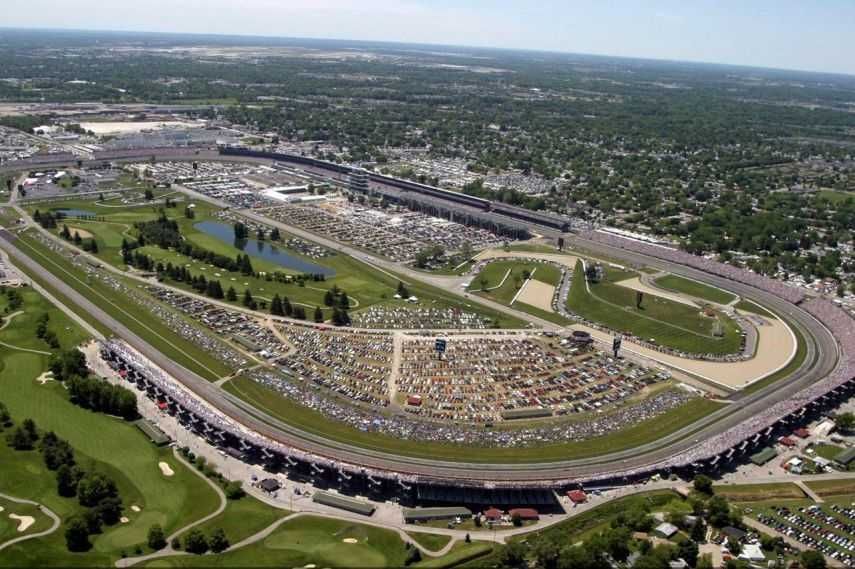 Indianapolis Motor Speedway is located in a suburb of Indianapolis. Back in 1909, when the racing circuit was built, it was the first original racing facility named as a speedway. It has a permanent seating capacity estimated at 235,000, but with the infield stands the capacity reaches almost 400,000, which makes IMS the highest-capacity sports venue in the world. The full capacity was filled during the inaugural US Grand Prix F1 race in 2000.

Jeff Gordon and Michael Schumacher have five wins each

Record-holding drivers with most victories among the three major events (Indy 500, Brickyard 400, and US GP) are Jeff Gordon with five Cup Series wins at oval, and Michael Schumacher with five F1 Grand Prix wins at the road course. Jimmie Johnson scored four NASCAR victories, while AJ Foyt, Al Unser, and Rick Mears each won Indy 500 four times. The absolute record-holder is Johnny Aitken, who had won 15 times in the early days of the track, between 1909 and 1916. 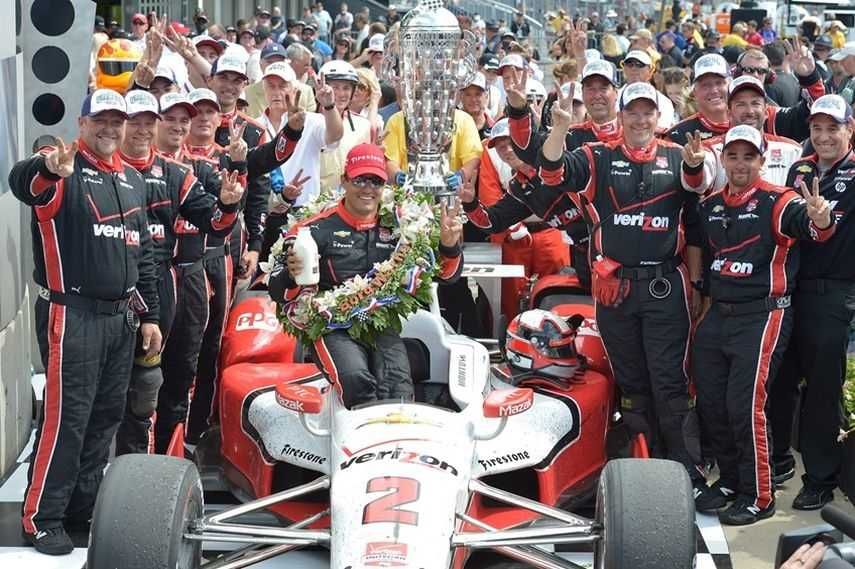 Carl Fisher was the father of the first American speedway

The man who started the IMS story was the Indianapolis businessman Carl G. Fisher. He was traveling a lot across Europe and had watched some races. At the time, racing was just getting started on the horse tracks and public roads. Fisher noticed how dangerous that kind of racing was and got the idea to make a track for racing and car testing.

The construction started in March of 1909

Fisher visited the Brooklands circuit outside of London in 1907, and after viewing the banked layout, it solidified his determination to build the speedway. He proposed building a circular track with smooth surfaces which would be suitable for high speeds. Fisher got together with a few fellow businessmen (James A. Allison, Arthur Newby, and Frank W. Wheeler) that invested in the land and started to build in March of 1909. 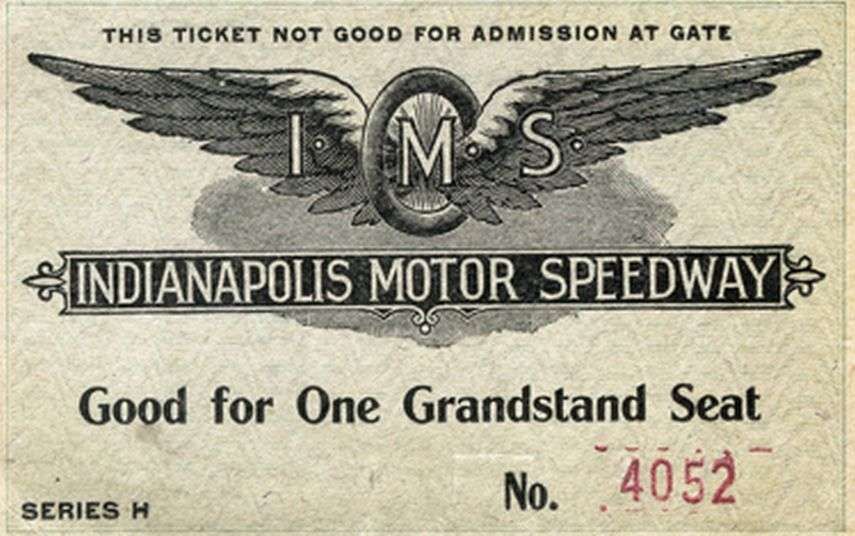 The ticket for Indianapolis Motor Speedway from 1909

Fatal casualties on the first day of racing

Five months later, on August 19th, 1909, the 2.5-mile (4km) oval hosted the first car race. A week before, few motorcycle races took part on the track. The track surface consisted of gravel, limestone covered with taroid (a solution of tar and oil), and the final topping of crushed stone. That kind of surface caused lots of problems for the drivers. Unfortunately, the first 250-mile race had fatal casualties, after Wilfried Bouque hit the fence and rolled. He and his mechanic, Harry Halcomb, were killed.

Concerned officials wanted to cancel the remaining races, but Fisher promised that the track would be repaired. The second day passed without problems, but on Day 3, during the 300-mile race, a few accidents happened. In the crash of Charlie Merz’s car, two spectators and his mechanic were killed.

To increase security, Fisher and his partners considered an idea of paving the track with bricks or concrete. Paving in 1909 was still relatively new with only a few miles of public roads paved, so they decided to use the bricks for track surface. To protect the spectators, they built a concrete wall. 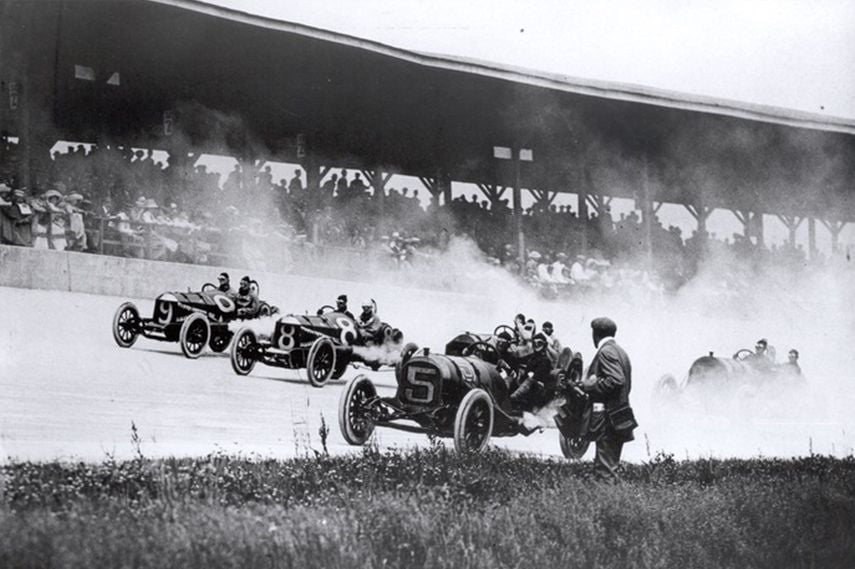 Forty cars participated in the 1911 Indianapolis 500

How the Brickyard got the name

The final brick of the 3.2 million bricks added to the track was made of gold and laid in a special ceremony by Governor Thomas R. Marshall. Before the work was completed, locals nicknamed the track the Brickyard, the name which is still in use. To commemorate those days, there are still 3 feet (or one yard) of original bricks at the start-finish line of the current track.

After the reconstruction was finished, the racers were back on track for speed tests in December 1909. During 1910, more than sixty races were held at the Brickyard, but in 1911, marketing strategy was changed and only one race per year was scheduled.

Ray Harroun’s victory at the first ever Indy 500

The first 500-mile race held on Memorial Day on May 30th, 1911, was attended by 80,000 spectators. Forty cars competed and Ray Harroun won. His victory is interesting because he drove alone to save the weight, while all the other drivers had a riding mechanic in their cars.

Driving the #32 Marmon, Ray Harroun won with an average speed of 120 km/h, ahead of Ralph Mulford with Lozier and David Bruce-Brown with Fiat. 26 drivers finished the race, 12 of them completed all 200 laps. Race winner Harroun collected the 10,000 dollar prize. After the race, he retired from racing. 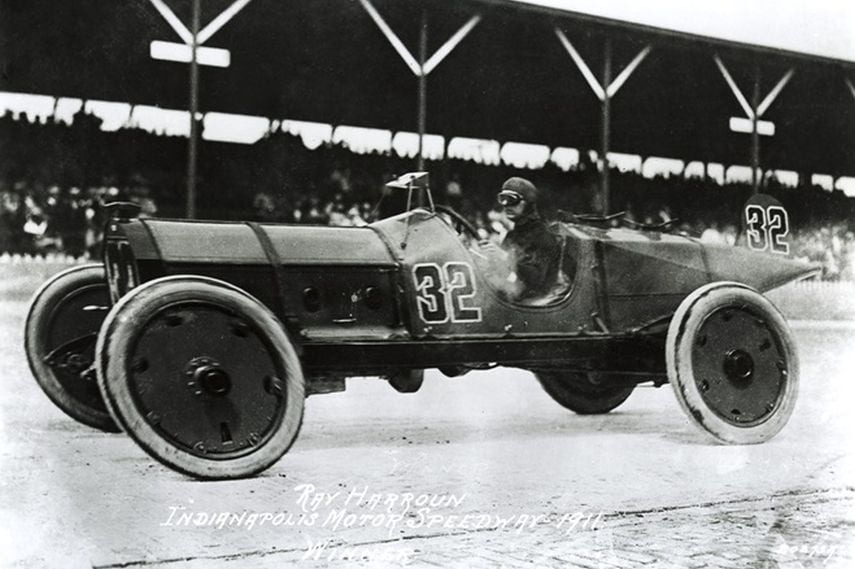 The new owner built a golf course inside the race track

In 1916, the Harvest Classic was held. It was a special racing event with three short races (20, 50, and 100 miles). Johnny Aitken won all three races, but more interesting is that those were the last races other than Indianapolis 500 to be held at the speedway until 1994, when NASCAR Sprint Cup would come along.

In 1927, the speedway was sold to a former racing driver Edward V. Rickenbauer. One of his interesting ideas which became reality was a golf course inside the track. The golf course still exists. 15 fatalities in the races during the early 1930s caused another reconstruction in 1935, with tarmac replacing the bricks in parts of the track. During World War II, the track was abandoned and fell into disrepair. The owner wasn’t interested in continuing the races, so, the three-times Indy 500 winner Wilbur Shaw started the campaign to find a new owner who would save the track. 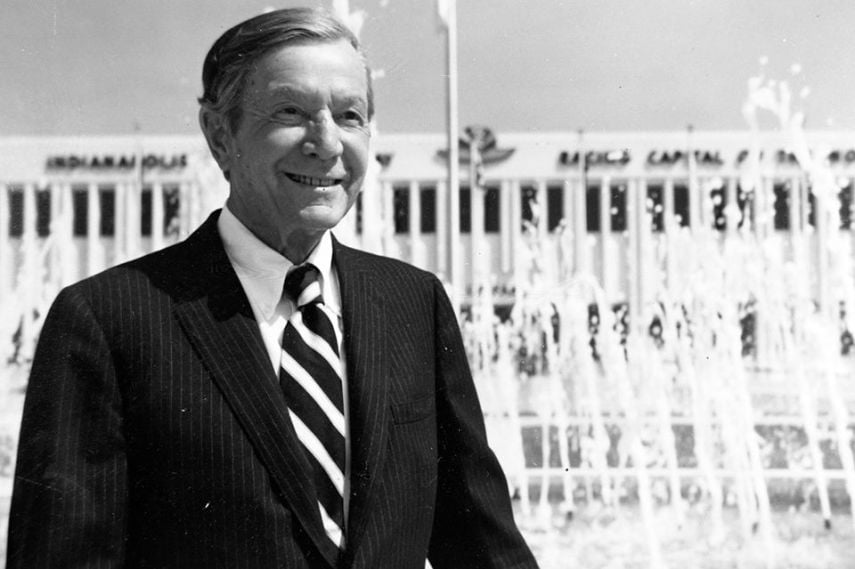 Tony Hulman saved the speedway in 1945

Businessman Tony Hulman bought the track in November 1945 and immediately ordered major renovations and repairs. Hulman family is still the owner of Indianapolis Motor Speedway. The races were continued and the track’s reputation grew so much that the Indy 500 became a part of the Formula One World Championship during a course of 10 years (1950–1960).

Although the race counted towards the F1 championship, non-American drivers refused to travel to the US, so the only one who competed was the 1952 F1 champion Alberto Ascari. In the season when he became the world champion, Ascari raced at Indy’s oval with Ferrari but retired after 40 laps. 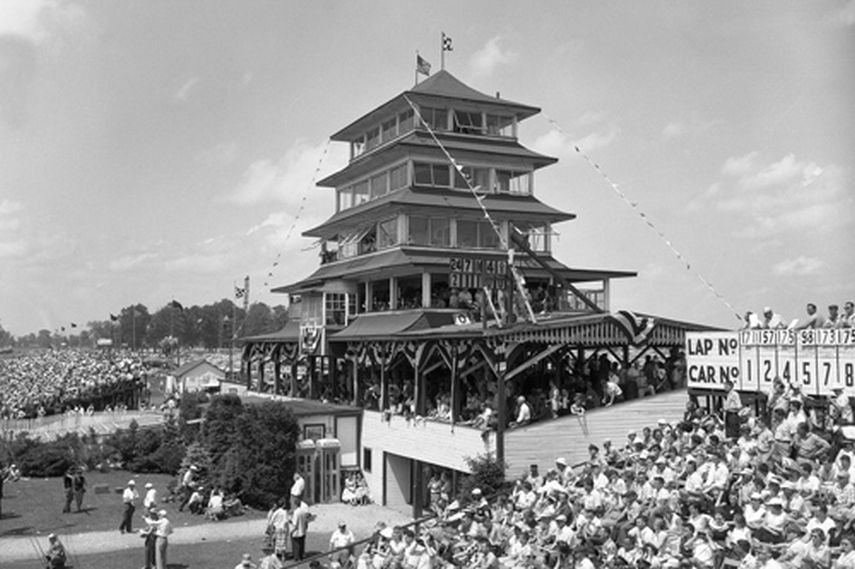 The famous Pagoda at Indianapolis Motor Speedway in 1956

Hall of Fame Museum was opened in 1956

During the 1950s, the speedway continued to grow, with new grandstands, suites, and other facilities. In 1956, the museum was opened and had been officially named Indianapolis Motor Speedway Hall of Fame Museum. The 1950s were also the most dangerous era of American racing: eight drivers were killed in that decade during or before the Indy 500 races.

In 1961, the final remaining brick sections of the track were paved over with asphalt. A 36-inch strip of the original bricks was kept intact at the start/finish line, where it remains today as the fabled Yard of Bricks. 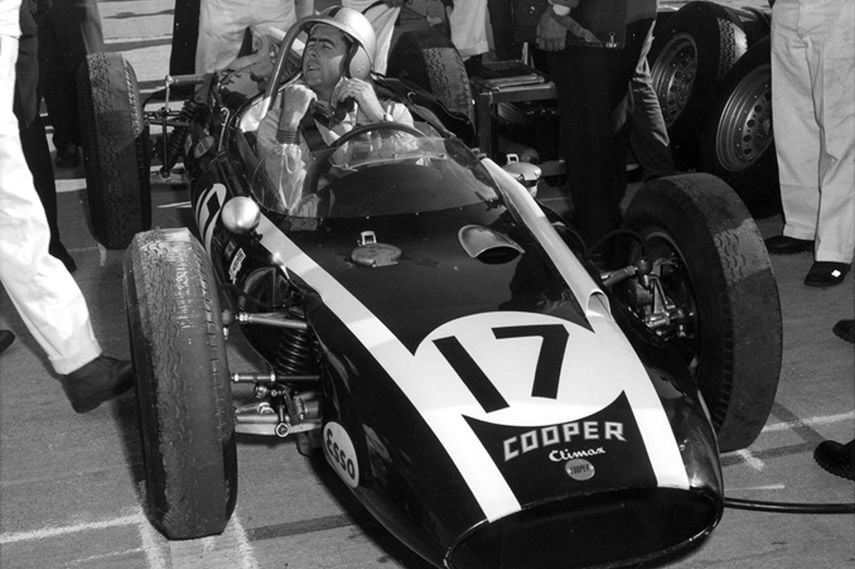 It’s absurd that Indy 500 race was ignored by the F1 drivers while it was a part of the championship during the 1950s and became popular just after it stopped being an F1 race. Double world champion Jack Brabham came to the 1961 Indianapolis 500 with rear-engined Cooper and surprised other 32 drivers with his speed and superior handling in the turns. Brabham missed the win and finished ninth, but everybody agreed that he started the rear-engine revolution at Indy. In 1965, Jim Clark took his first Indy 500 crown with a rear-engined Lotus and since then, every winner had a rear-engined car. 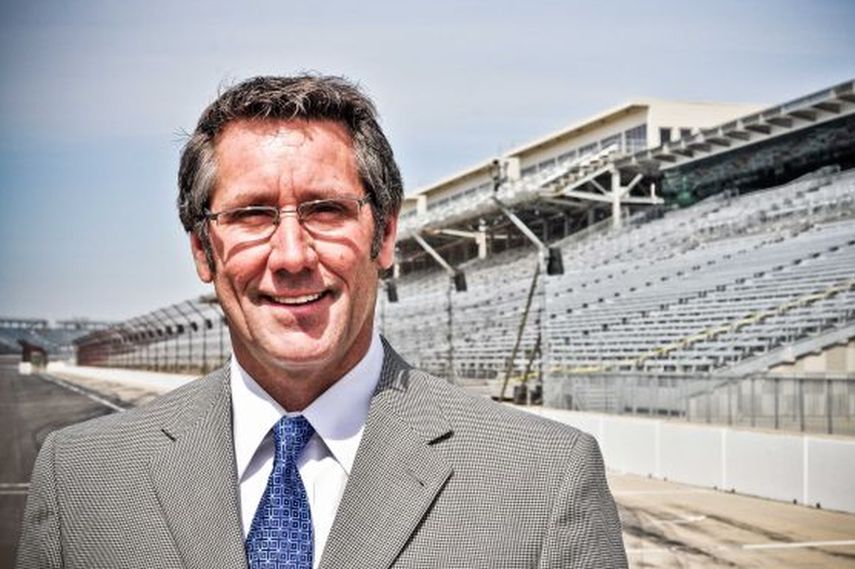 The following chapter of the famous track was opened in 1989 when Hulman’s grandson Tony George became the president and CEO of the Indianapolis Motor Speedway Corporation. During his first few years, he started new projects such as an infield road-circuit, Tower Terrace Suites, pit lane reconstruction, and a control tower.

Since 1916, the Indy 500 was the only race at the speedway, so Tony George decided to offer something else to the automotive audience. In August 1994, the first NASCAR Sprint Cup race was held, called the Brickyard 400, with Jeff Gordon as the winner. The next addition to the programme was the International Race of Champions in 1998, and finally in 2000, Formula One Grand Prix race was held at the most famous American track. 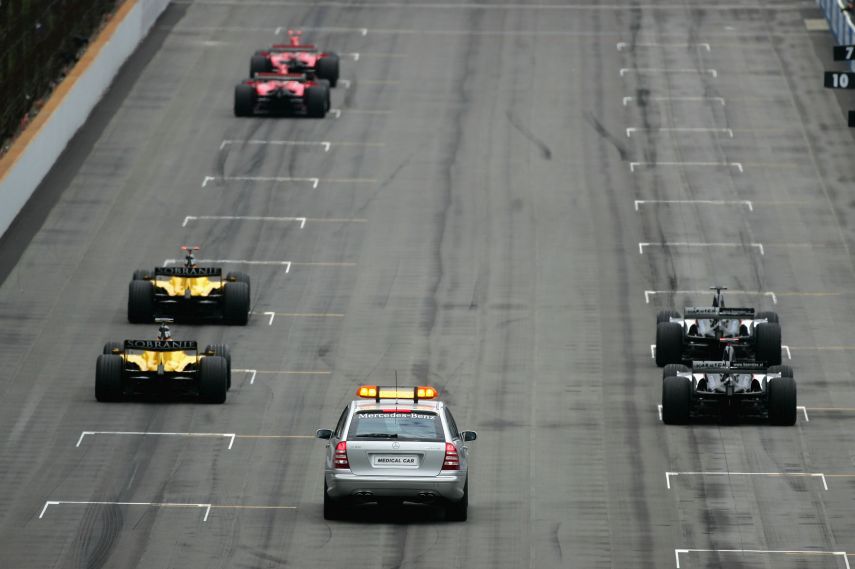 Formula One cars raced at the 4.192 meters long infield road course with 13 turns, which was constructed between 1998 and 2000, incorporating western and southern parts of the oval. The first Indianapolis-hosted US Grand Prix winner was Ferrari’s Michael Schumacher. In eight editions of the race, Schumacher has won five times, including the controversial 2005 race when only six cars competed after the rest of the field boycotted the race because of the problems with Michelin tires. Other US GP winners were Mika Hakkinen (2001), Rubens Barichello (2002), and Lewis Hamilton (2007).

Tony George and Formula 1 boss Bernie Ecclestone could not reach an agreement to continue the US Grand Prix at the Brickyard for 2008, but the replacement was a Moto GP event. The road course was modified to provide secure racing for motorcycles. The first Red Bull Indianapolis Moto GP winner was Valentino Rossi, and later winners were Jorge Lorenzo, Casey Stoner, Dani Pedrosa (twice), and Marc Marquez (three times). The last race was held in 2015, and the following year, Indianapolis dropped out from the Moto GP calendar. 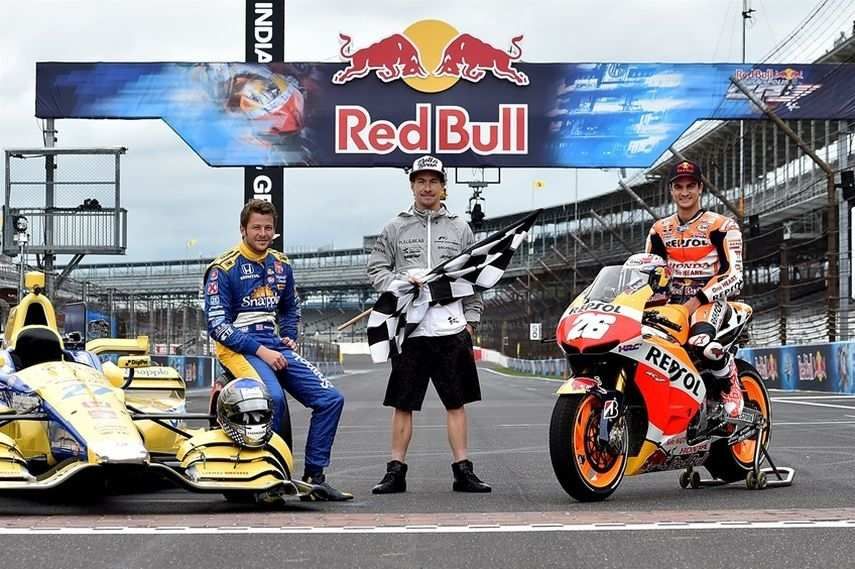 The Indy Lights Series and the Grand Prix of Indianapolis

Since 2003, the Indy Lights Series was also presented at Indianapolis Motor Speedway, even with two races in the short period from 2005 to 2007. One race was regular, another was a supporting race to F1 US Grand Prix. IndyCar Series also had two races at IMS since 2014, after Grand Prix of Indianapolis was added to the calendar. For the purpose of this race, the road course was once more slightly modified and shortened to 3925m. Two more supporting series competed at Indianapolis road course since 2014 – Pro Mazda and US Formula 2000.

Since the first NASCAR race at Indianapolis in 1994, the schedule was changing during the years and Super Weekend at Brickyard was established, which, in the period from 2012 to 2014, consisted of NASCAR races (Sprint Cup and Nationwide Series) and IMSA sanctioned races (United Sports Car Championship, Continental Tire Sports Car Challenge). 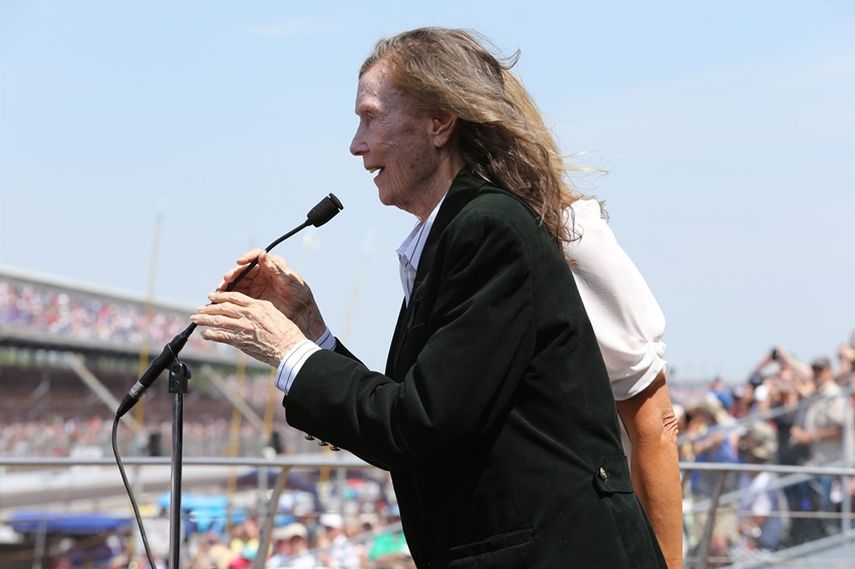 So, the current strategy of Indianapolis Motor Speedway, with a schedule full of races, is completely different compared to the idea from 1911 and only one race annually. Whether there will be some new ideas in the future or not depends on the Hulman family, which still owns the world’s greatest race track. 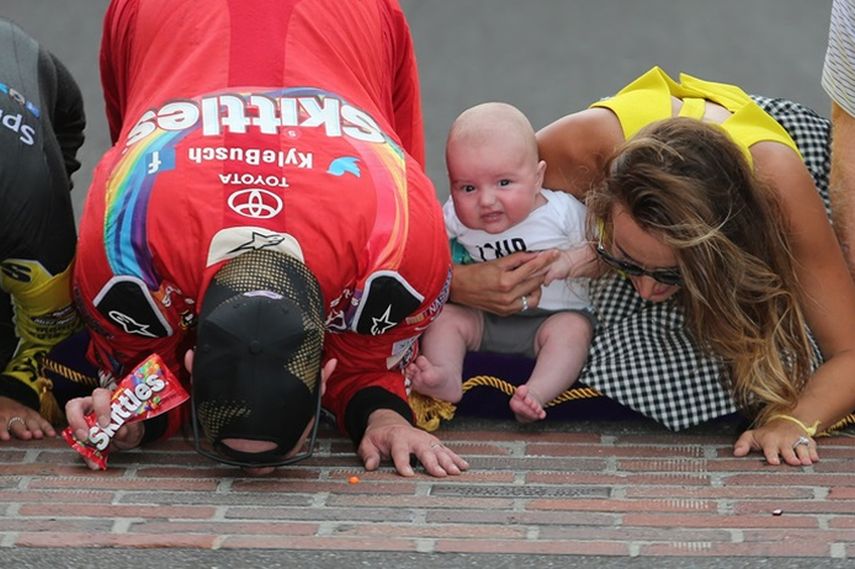 The tradition of “kissing the bricks” was started in 1996. Here’s Kyle Busch after his victory in 2015

One thing is certain: at least twice a year, we will hear the legendary sentence which Hulmans said many times before the race: ‘Ladies and gentlemen, start your engines!’ One more famous tradition of ‘kissing the bricks’ is also something we hope will last for many more years.