The racing circuit in Wanneroo, 50 kilometers north of Perth, was opened in 1969. It’s interesting that the first race which was held on a new circuit, in March 1969, was called Six Hour Le Mans. It was the endurance racing event for sports cars and touring cars, held between 1955 and 1972, including four appearances at Wanneroo Park. 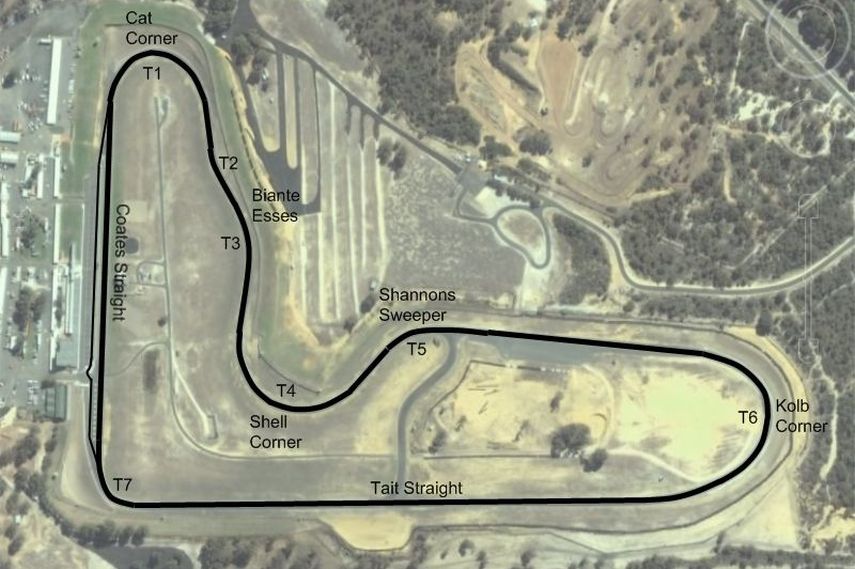 Racing circuit with a simple and fast layout

From the first days, the 2.415-km long Wanneroo race track had a simple layout with seven turns and two long straights. The track was upgraded just once, in 1992, when a short 1.7-km circuit was constructed by linking Turn 5 to the back straight. This extension was funded by famous West Australian racer and businessman Alf Barbagallo, so since then the circuit name was officially changed to Barbagallo Raceway. 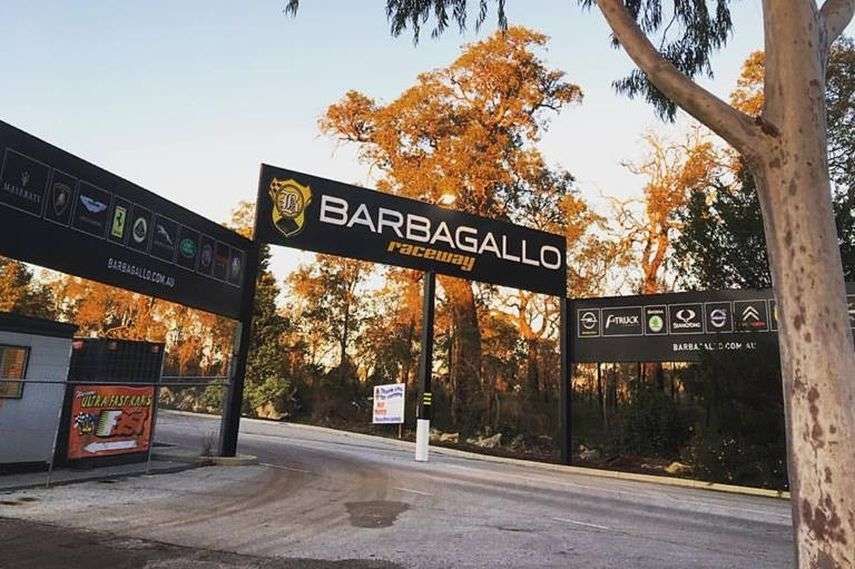 One and only Australian Grand Prix at Wanneroo in 1979

The 1979 Australian Grand Prix was the first round of the Australian Drivers’ Championship and it was opened to racing cars complying with Australian Formula 1 rules, incorporating Formula 5000 and Formula Pacific cars. 18 drivers took part in the race. One of the competitors was Larry Perkins, who eventually won the 1979 Formula 5000 championship and became the six-time winner of Bathurst 1000 later during a career. Perkins retired after an opening lap accident, the winner of the race was Johnny Walker, who was driving the Chevrolet-powered Lola T332 F5000 car.

The best lap time 52.11sec was set by Alfredo Costanzo in the qualifying session. During the race, fastest lap time was 54.92sec. The outright in-race lap record  was set in 2005, after the circuit was completely resurfaced in 2004, by Gary West in Lola T88/50 Buick. He lapped around the circuit for 52.26 seconds.

The touring cars lap record was set by Jason Bright in June 2004. He drove Holden VY Commodore around one lap for 55.944 seconds. The qualifying lap record 54.9898 was set by Jamie Whincup in 2011. 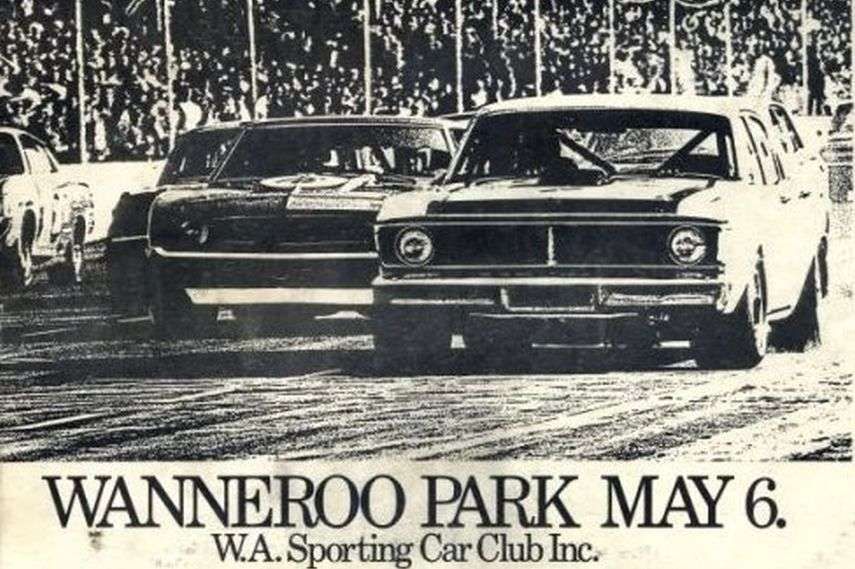 The touring cars visited Wanneroo for the first time in 1973. The races weren’t held there between 1974 and 1977. Since 1978 the Wanneroo race is a regular part of the Australian Touring Car Championship and its incarnations Shell Championship Series and V8 Supercars Championship. The event was removed from calendar only in 2010, so in that year, the state government decided to upgrade the raceway to improve the quality of the track and its facilities.

Wanneroo Raceway first hosted a round of the Australian Touring Car Championship (ATCC) in 1973. It was the first ATCC event ever held in Western Australia. The first winner was Allan Moffat, who was driving the Ford XY Falcon. Moffat won the race ahead of Peter Brock.

The championship did not return to Barbagallo race track until 1978. The 1978 event consisted of two heats and the Holden Dealer Team scored a 1-2-3 finish in the overall results, with Peter Brock taking victory over John Harvey and Wayne Negus.

The number of the round victories doesn’t fit with the number of race victories because the number of races in one round varied during the years. In 1997, Peter Brock was the overall winner of the Barbagallo’s round, although he didn’t win any of three races. The winners in 1997 were Larry Perkins, John Bowe, and Greg Murphy, but Brock collected the biggest amount of points. 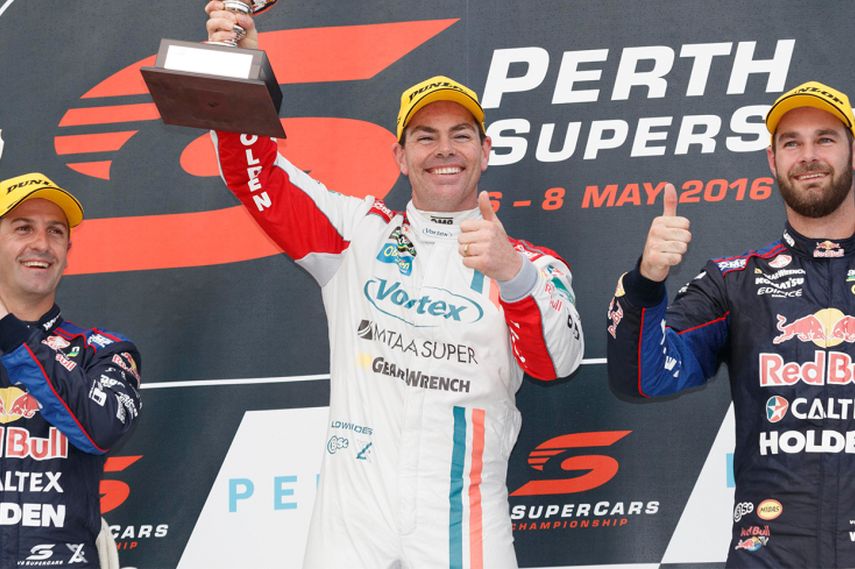 Nobody has more wins at Barbagallo Raceway than Craig Lowndes

Craig Lowndes is an absolute master of the Barbagallo Raceway

The absolute record holder of the Barbagallo Raceway is Craig Lowndes. He won for the first time at Wanneroo in 1996, in the year when he won his first championship title. He was the winner of all three races. He raced outside Australia in 1997, but returned to the ATCC in 1998 and scored nine consecutive wins at Barbagallo Raceway from 1998 to 2000. Nobody did something like that at any race track in a history of the Australian motorsport.

In 2001, Paul Radisich finally stopped the unprecedented dominance of Craig Lowndes, by winning all three races. The next Lowndes’ race victory followed in 2009, then two more in 2013 and 2014. In 2015, Lowndes was the round winner at Barbagallo, although he didn’t win any of three races. In 2016, the Perth SuperSprint featured two races and Lowndes won the first race, increasing his total number of Wanneroo victories to sixteen! 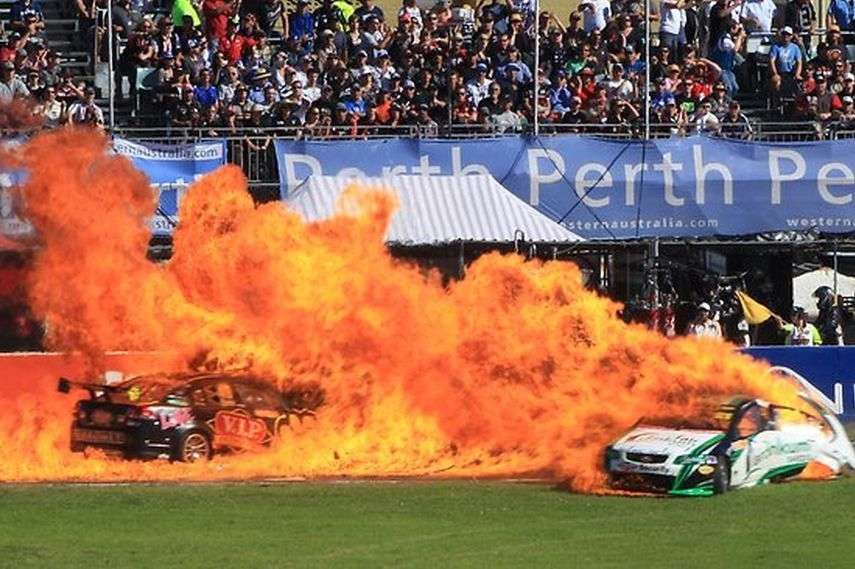 One of the most remembered events was the 2011 Perth Challenge. In the second of three races, an accident happened, one of the biggest in a history of the V8 Supercars. Karl Reindler‘s Holden Commodore, 13th on the grid, stalled at the start and was hit by Steve Owen‘s Holden, who had started 25th. The impact ruptured the fuel tank in Reindler’s car, engulfing both cars in flames. Reindler suffered superficial burns to his hands and face as well as smoke inhalation, while Owen escaped serious injury.

In 2010 Formula One visited Barbagallo Raceway. Of course, it wasn’t during some race but as a part of the inaugural Australian Festival of Speed. Red Bull Racing team and Australian F1 driver Mark Webber participated in the event, which was the only one of that kind at Barbagallo.

In recent years, except V8 Supercars Championship, some other series visited Wanneroo, such were Australian GT Championship or V8 Ute Racing Series. The raceway is also the home of the Western Australia Sporting Car Club, which has a variety of racing event all year long.