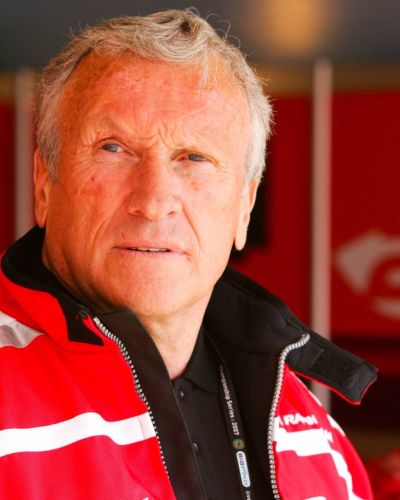 Tom Walkinshaw (1946-2010) was the Scottish racing driver, team owner and car builder whose legacy is still living in historic motorsports books and automotive museums, but also his name still lives in some racing competitions almost a decade after his death.

As a team owner and race car constructor, Tom Walkinshaw developed many fantastic cars for his own team or other teams such were touring cars Mazda RX-7, Rover Vitesse 3500 and Jaguar XJ-S or Le Mans-winning prototypes Jaguar XJR-9/XJR-12 of Porsche WSC-95. 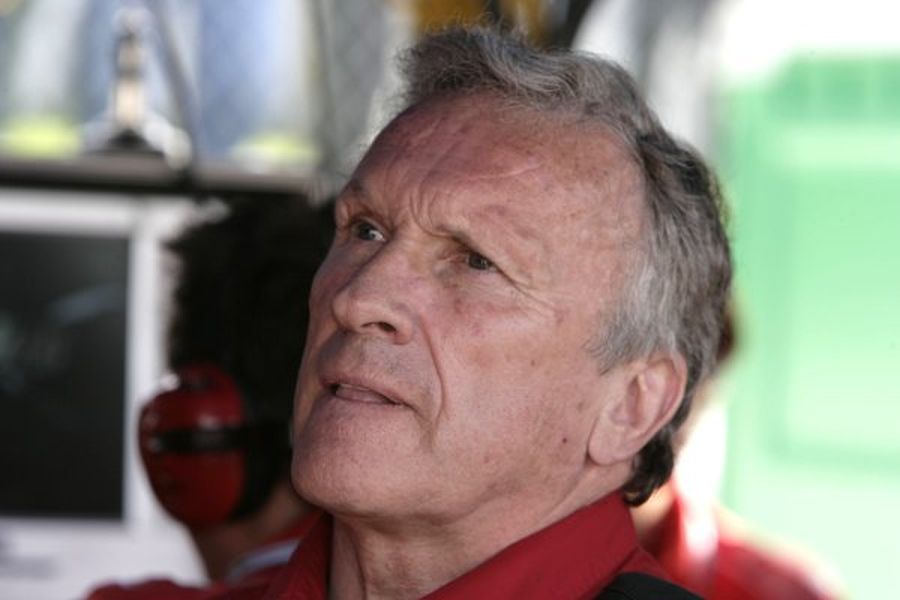 Born in August 1946 at Mauldslie Farm in Midlothian, Scotland, Tom Walkinshaw gained his first racing experience in 1968, driving an MG Midget. In the same year, he also raced in the Formula Ford and then, in 1969, he captured the championship title in the Scottish Formula Ford 1600.

Over the next few years, he raced in many open-wheel competitions all over Europe - Formula Ford, Formula 3, Formula 2, Formula Atlantic or Formula 500 Europe.

Walkinshaw started to develop his touring car racing career in 1972, making a debut in a Ford Escort RS 1600 in Nurburgring's round of the European Touring Car Championship.

Two months later, he finished third overall and scored Division 1 victory in RAC Tourist Trophy at Silverstone. In September 1973, he was ninth at Tourist Trophy in a Datsun Sunny and then switched to Ford Capri II 3.0 in 1974.

At the wheel of a Ford Capri, Walkinshaw achieved a significant success in the 1974 British Touring Car Championship, scoring six victories in Class C and taking the championship title in that class. In the overall classification, he was fourth.

Outside BTCC, he raced at Spa 24 Hours in a Ford Capri, sharing a car with John Fitzpatrick. They didn't finish the race. One more DNF at Spa followed in 1975 when Walkinshaw and Fitzpatrick started from pole but broken gearbox stopped them.

Always interested in engineering and mechanics, Walkinshaw established his own racing company Tom Walkinshaw Racing (TWR) in 1976, running in the same time a garage for building race cars and the racing teams to compete in different championships. TWR's first project was a BMW 3.0 CSL which Walkinshaw was driving at Daytona 24 Hours in February 1976, sharing a car with John Fitzpatrick.

Walkinshaw and Fitzpatrick also raced in a BMW 3.5 CSL Turbo in the Group 5 of the World Championship for Makes, winning the 6-hour race at Silverstone. They also raced at Le Mans 24 Hours in that car, not finishing the race

In the British Touring Car Championship in 1976, Walkinshaw continued to race in a Ford Capri II 3.0, scoring four overall victories and finishing fifth in the championship points.

In 1977, Tom raced in a BMW 530i in the British and French touring car championships. In the European Touring Car Championship and at Le Mans 24h, he raced in a BMW 3.0 CSL. The highlight of the season was a victory at Tourist Trophy for Walkinshaw and Dieter Quester in the #6 BMW 3.0 CSL.

In 1978, one more season with BMWs followed in national and international touring car competitions. He won one BTCC race while in the ETCC he was a winner at Jarama and Estoril, sharing Luigi Team's BMW 3.0 CSL with Umberto Grano. At 1978 Le Mans, Walkinshaw races in BMW-powered Osella PA6 prototype, not finishing the race.

BTCC vice-champion in a Mazda RX-7

Outside BTCC in 1979, Walkinshaw raced at Spa 24 Hours in a Ford Capri III 3.0S, sharing a car with Jacques Goujon. They didn't finish the race. 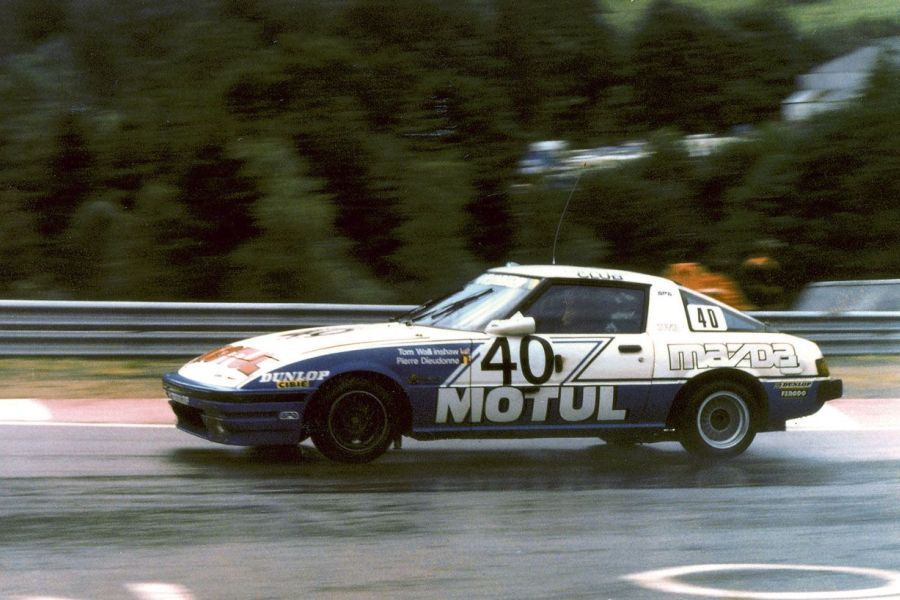 In 1980, Walkinshaw slowed down his racing activities, handling TWR cars to other drivers. He participated in just one race, scoring a class victory in the ETCC round at Zandvoort together with Pierre Dieudonne in a Mazda RX-7. 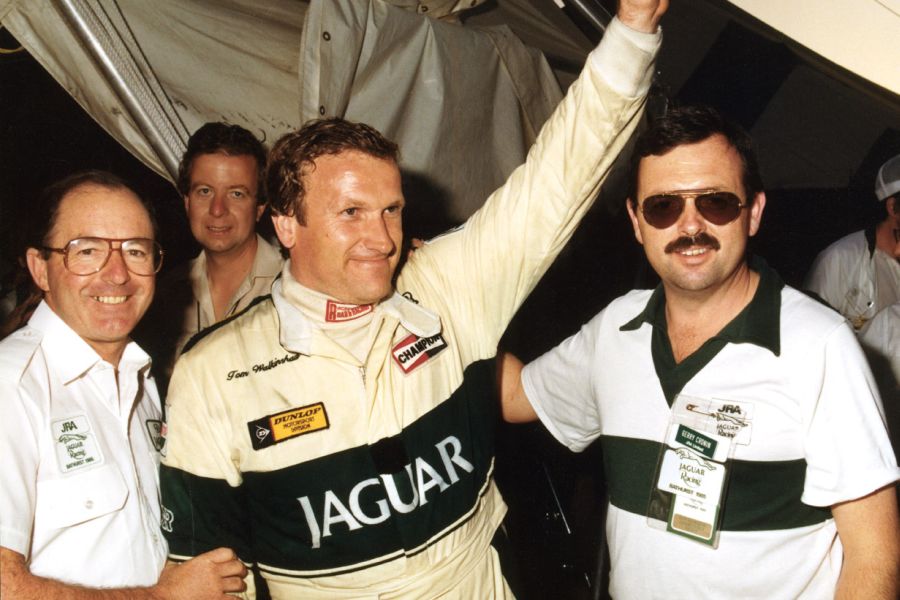 Tom Walkinshaw was the 1984 European touring car champion with Jaguar

1984 ETCC champion in a Jaguar XJS

In 1982, TWR's new project was a Jaguar XJS. Tom Walkinshaw raced with that car in the European Touring Car Championship, winning four races and finishing second in the championship points. His co-driver for most of the season was Chuck Nicholson. Outside ETCC, Walkinshaw raced at 24 Hours of Le Mans in a Mazda RX-7, not finishing the race.

Walkinshaw finally captured ETCC crown in 1984, together with Hans Heyer in a Jaguar XJS HE. They were race winners four times, including a victory at 24 Hours of Spa in the #12 Jaguar. The third co-driver in that race was Win Percy.

While racing with Jaguar in the ETCC, TWR was running Rover Vitesse in the BTCC, taking all eleven victories in the 1983 BTCC season and championship title for Steve Soper, but subsequently, all three Rover drivers had been disqualified from the championship due to bodywork irregularities and engine installation issues.

In 1984, the season was clean and Andy Rouse took the BTCC title in a Rover Vitesse. Walkinshaw himself didn't race in the 1984 BTCC season, returning next year in one race as a guest and winning at Brands Hatch. 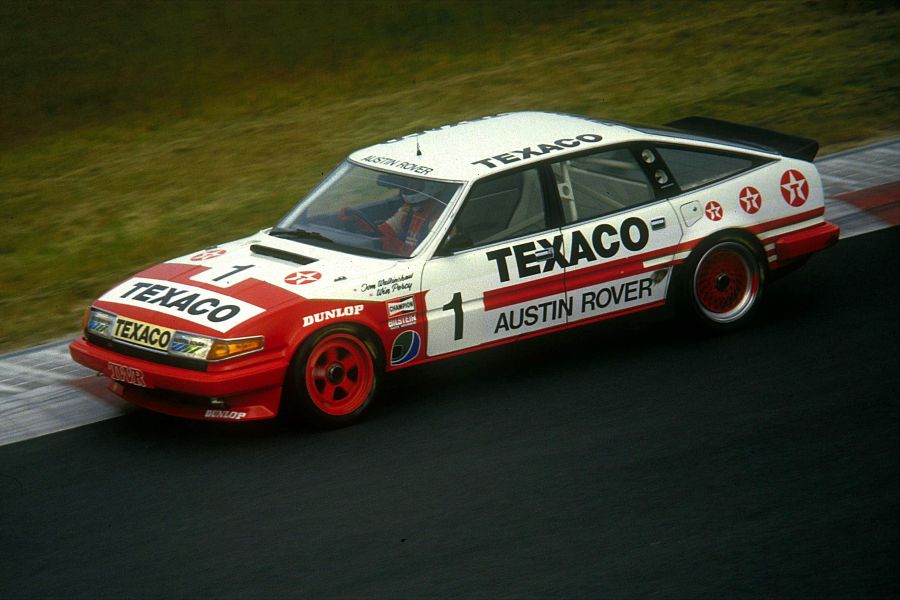 1985 ETCC vice-champion in a Rover Vitesse

After proving that Rover Vitesse is good for winning a championship on home soil, Walkinshaw was driving that car in the 1985 ETCC season, under the banner of Bastos Texaco Racing Team.

Sharing a car with Win Percy, he scored three consecutive wins at the start of the season and three more later, but they lost a title to Eggenberger Motorsport's Franco Brancatelli and Thomas Lindstrom in a Volvo 240 Turbo.

One more ETCC season in the Rover Vitesse followed in 1986. Tom Walkinshaw finished third in the points, behind BMW's Roberto Ravaglia and his teammate Win Percy.  Walkinshaw was a race winner two times, at Monza and Donington.

Tom Walkinshaw slowed down his racing activities in 1987, racing in a Jaguar XJS at Wellington 500 race and in a Holden Commodore VL at Nurburgring's round of the World Touring Car Championship.

In September 1988, he raced in a Holden at Tourist Trophy, a part of the European Touring Car Championship, sharing a car with Jeff Allam. Tom Walkinshaw's last race was the Bathurst 1000 in October 1988 at Mount Panorama Circuit. He raced in two Holdens (#10 and #20), sharing cars with Jeff Allam, Larry Perkins, and Denny Hulme. Both cars retired from the race.

While his racing career came to an end in 1988, Tom Walkinshaw's engineering knowledge and a preparation of race cars resulted with many more great victories for his team or factory teams which were using his cars. 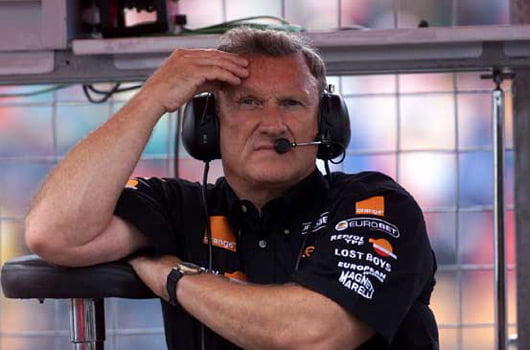 Walkinshaw also tried himself in Formula One

Among other competitions and racing disciplines, Tom Walkinshaw also tried himself in Formula One. In 1991, he was recruited as Engineering Director of Benetton and worked with the team until 1994. In 1995, Walkinshaw bought 50% of the Ligier team from Benetton team principal Flavio Briatore. Later he pulled out of the deal and bought Arrows team.

His TWR group went into liquidation in 2002 after the Arrows team ran out of money. This led to the Australian arm of the operation being bought by Holden. Tom Walkinshaw returned to V8 Supercars in 2005 and began a new relationship Holden Racing Team.

Tom Walkinshaw died in December 2010. One of his sons Ryan Walkinshaw continued to run Walkinshaw Racing in Australia, most recently making a deal with Andretti Autosport and United Autosports to form the Walkinshaw Andretti United.