Michigan International Speedway is one of the six American superspeedway oval racing tracks. A two-mile D-shaped racing circuit is opened in 1968 and since then it hosted two NASCAR Sprint Cup Series events annually, together with races of other NASCAR national series. Between 1968 and 2007, CART and IndyCar races were also held at MIS. The speedway is currently one of twelve NASCAR tracks owned by the International Speedway Corporation and it is one of the best racing facilities in the United States. 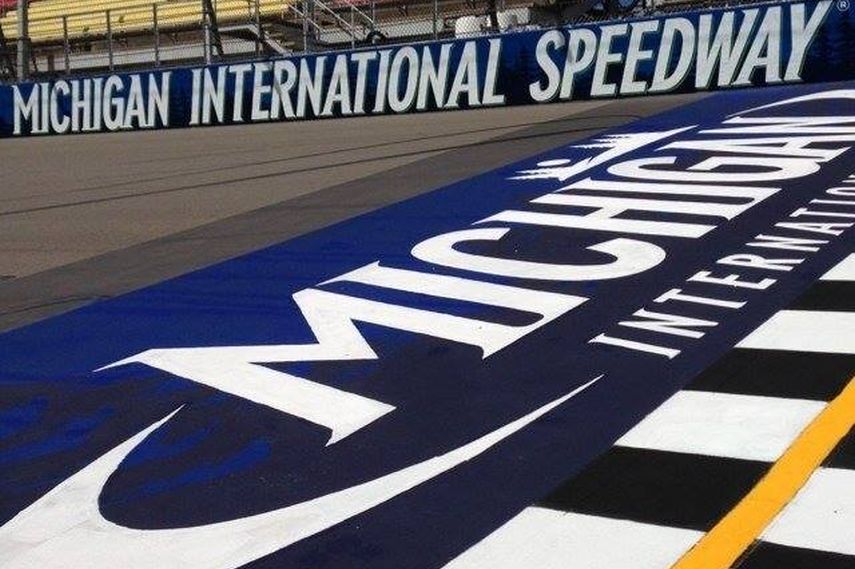 Speedway in Brooklyn was the Lawrence LoPatin’s brainchild

The story of the speedway, located in Brooklyn, a little village in the Irish Hills, about 80 miles from Detroit, started as an idea in the head of Detroit land developer Lawrence H. LoPatin. In September 1967, he began the construction of the racing circuit at the 1,400 acres site.

The construction was a part of his much bigger plans to establish his own network of racing circuits. The Michigan International Speedway was the first of them.  The 2-mile oval, designed by Charles Moneypenny, who was responsible for Daytona International Speedway, had 18° banking in the turns, 12° in the curving frontstretch and 5° in the backstretch. The infield and outfield road courses were also constructed, with various combinations and layouts, from 1.9 miles to 3.3 miles. 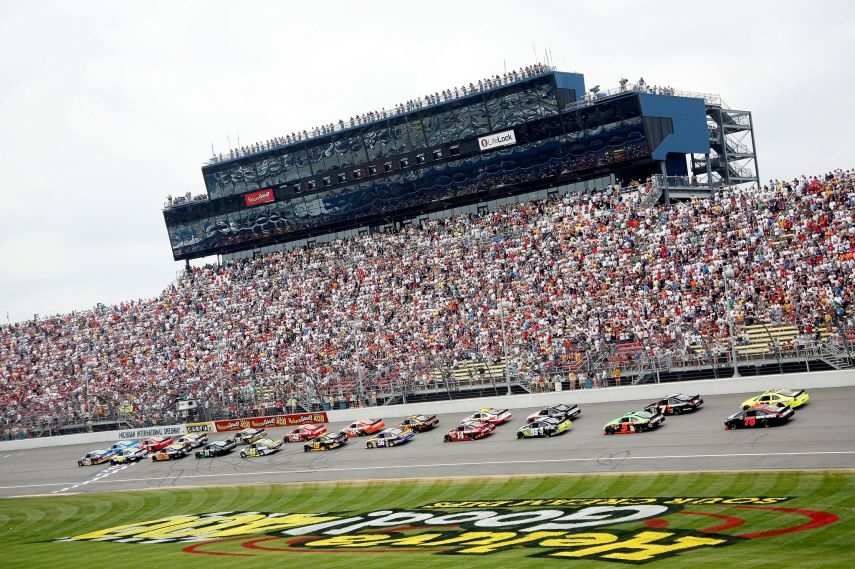 Bucknum and Yarborough were the first winners at Michigan

After a year of construction, the speedway was opened in October 1968, with a seating capacity of 25,000. The inaugural event was the USAC 250-mile championship race. It took place on October 13, with Ronnie Bucknam as the first ever winner at the Michigan International Speedway.

The first NASCAR race took place on June 15, 1969. What a race it was! Cale Yarborough and LeeRoy Yarbrough battled door-to-door for most of the race. In the final lap, 300 yards from the finish line, LeeRoy Yarbrough spun and crashed, so Cale Yarborough became the first ever NASCAR winner in Brooklyn. In the following years, Cale Yarborough won seven more times at Michigan, becoming the second-best driver in a history of the speedway, behind David Pearson with nine wins. 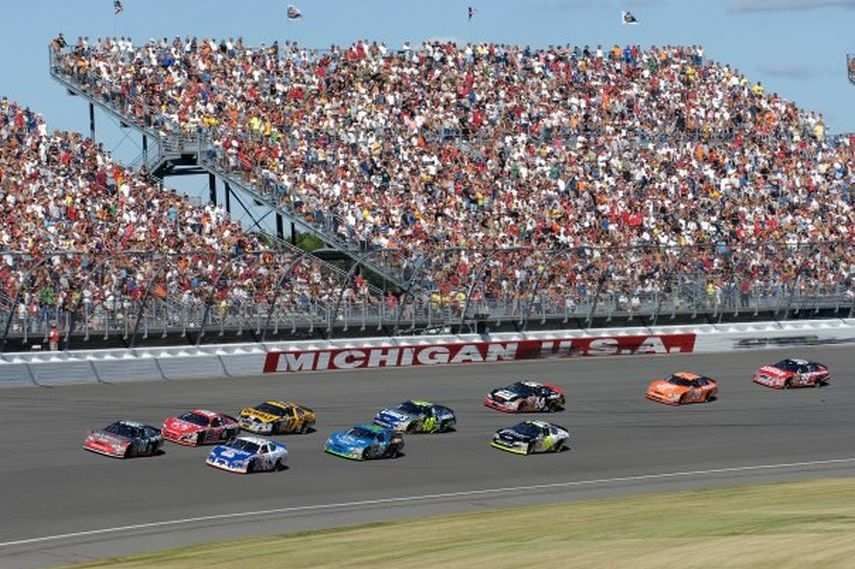 NASCAR visited Michigan for the first time in 1969

Parallel with a construction of the Michigan International Speedway, Lawrence LoPatin built the Texas World Speedway and bought the stakes in some other tracks (Riverside and Atlanta), planning to build one more circuit in New Jersey. His ambitious plans were ruined in the following years due to poor attendance, which led to heavy losses. In 1971, LoPatin’s company American Raceways Incorporated bankrupted.

In 1973, former racing driver and motorsport magnate Roger Penske stepped in. He bought a speedway for $2 million. During Penske’s ownership, Michigan International Speedway became the premier motorsports facility because of constant improvements and upgrades, including the new seating capacity for 125,000 spectators. 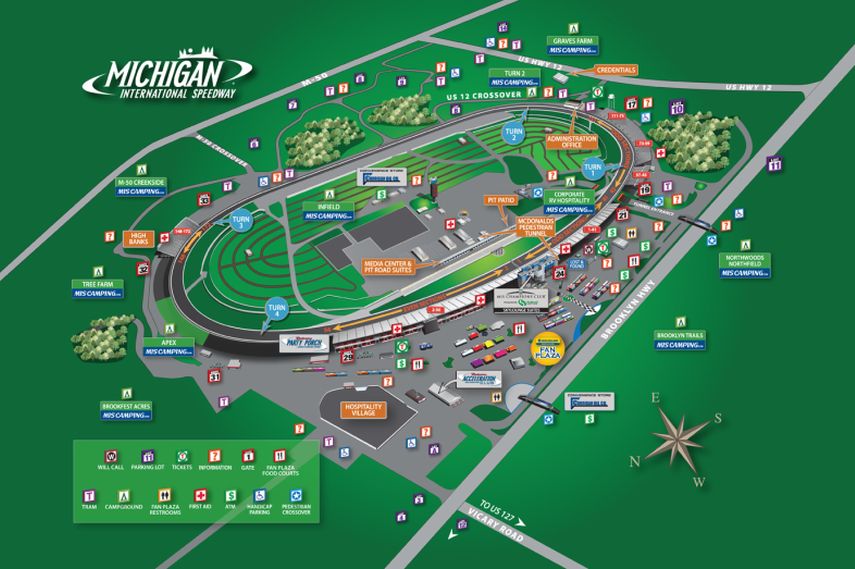 The outfield road course was closed for racing. Infield road course was in use until 1984. In 1986, the complete surface of the speedway was reconstructed. In 1997, the Penske Motorsports company was founded, adding several NASCAR tracks to its portfolio. In 1999, Penske Motorsports and International Speedway Corporation merged, so the Michigan International Speedway became the part of the America’s largest motorsport business group.

It guaranteed further improvements during the 2000s and 2010s. A major repaving project followed in 2012, both for oval and the infield course. The current schedule of events features two NASCAR Sprint Cup Series races annually and one race each of Xfinity Series, Truck Series and ARCA Racing Series. 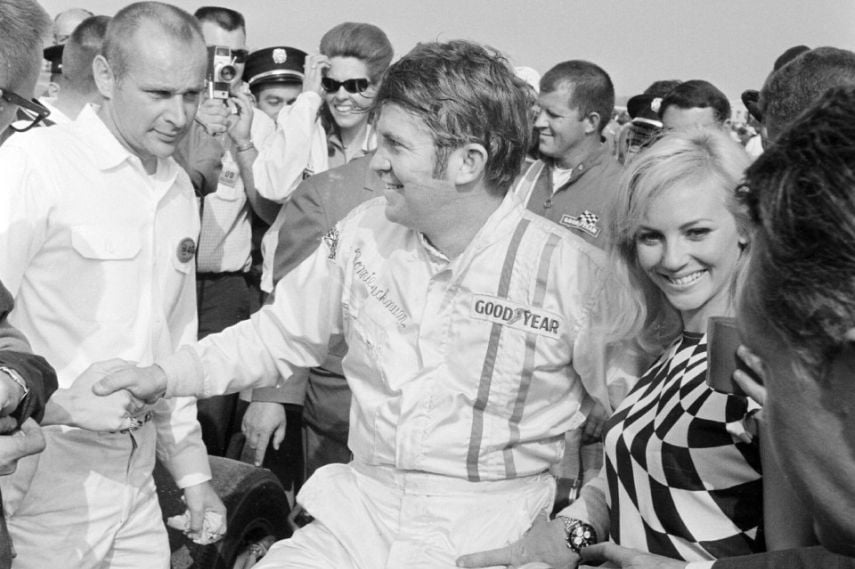 The single-seaters visited Brooklyn for the last time in 2007. After USAC held the inaugural race at MIS in 1968, the single-seater championship had the regular event at the track in late July or early August, until 1995. Between 1973 and 1986, there was the second race in late September.

Following the split of the CART Indy Car World Series and Indy Racing League in 1996, Brooklyn hosted the U.S. 500 race on May 26, the same weekend as Indianapolis 500. Between 1997 and 2001, the CART held back a single date in July. In 2002, the race at Michigan became a part of the IndyCar Series, always in late July or early August. The last IndyCar race took place in 2007.

Between 1968 and 2007, Michigan International Speedway hosted a total of 55 Indy car races, including twenty-two 500-mile events. The races at Michigan became notorious for high speed, being rough on cars, and for devastating crashes. The 1990 race, won by Al Unser Jr. with an average speed 189.727 mph, was the fastest 500-mile race in history at the time, a record that stood until 2002. 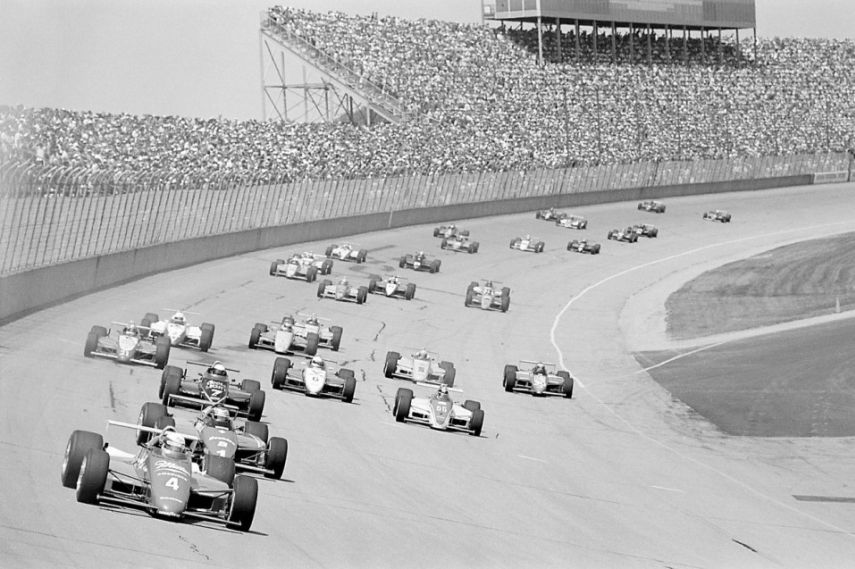 In the USAC era, between 1968 and 1978, multiple winners at Michigan were AJ Foyt, Danny Ongais, Johnny Rutherford and Gordon Johncock. Bobby Unser scored three victories in short races before the first 500-mile race was held in 1981. Two drivers (Michael Andretti and Scott Goodyear) won the Michigan 500 twice, while Tony Kanaan won a 500-mile race and a 400-mile race, respectively.

Many victims of high speeds and hard walls

Besides many notable races and notable winners, Champ Car and Indy Car races at Michigan were also remembered because of several tragedies and big wrecks. In 1984, Al Unser Jr and Chip Ganassi crashed into the wall at the backstretch. That crash ended Ganassi’s racing career. The similar thing happened to Emerson Fittipaldi in 1996, who crashed on the first lap of the Marlboro 500 race. Fittipaldi’s injuries prevented him for further racing.

Hector Rebaque, Danny Sullivan, Derek Daly, A. J. Foyt, Al Unser Jr., Mario Andretti and Bobby Rahal, among others, all suffered injuries from crashes at Michigan. Despite the numerous serious crashes, no Indy car drivers have ever been killed at Michigan International Speedway. The spectators had no such a luck. The biggest tragedy happened on July 26, 1998, when three spectators were killed and six injured from flying debris during a CART race crash. 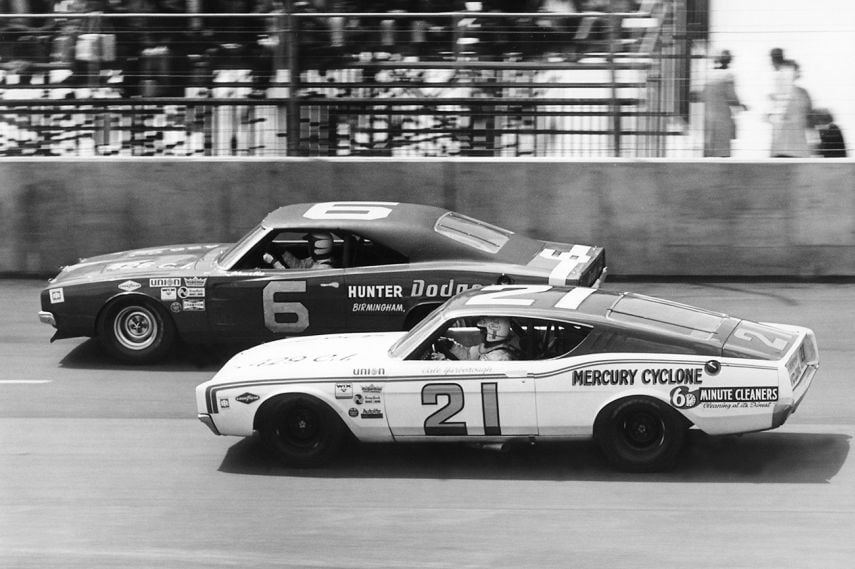 NASCAR’s premier series had a double program at Michigan International Speedway since the first visit in 1969. As we mentioned before, Cale Yarborough has won the first ever NASCAR race, the Motor State 500 on June 15. The second race, the Yankee 600, took place on August 17 and the winner was David Pearson. The race in August, planned as 600-mile race, was shortened to 330 miles due to rain. Since 1970, both races were set as 400-mile races.

Yarborough and Pearson later took 15 more victories together. Pearson is a record holder at Michigan International  Speedway with nine wins, Yarborough triumphed eight times. The closest rival behind them was Bill Elliot with seven victories. Mark Martin and Rusty Wallace visited the Victory Lane five times each. Among active drivers, Greg Biffle has the most Cup Series wins. He won four times. 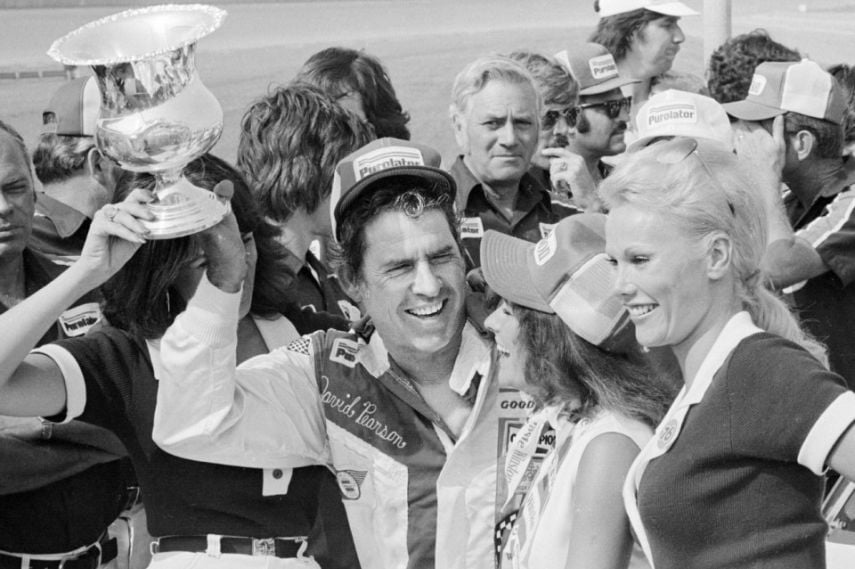 David Pearson is a record holder with nine wins in Brooklyn

The inaugural race at MIS would be always remembered, but there were some other notable races in Brooklyn. In 1999, for the first and only time at Michigan, the race goes caution-free. The winner was Dale Jarrett, who set an average speed of 173.997 mph, the NASCAR’s all-time record for a 400-mile race.

In 1994, the story of the weekend was a horrific crash in practice that left Ernie Irvan critically injured with head and lung injuries. After making a full recovery, Irvan returned to NASCAR in 1995. In 1997, Irvan won his final race at the June race at Michigan. In 1999, exactly five years after his near fatal crash, Irvan wrecked again at Michigan in a practice session for the Busch Series race. He was diagnosed with a mild head injury and a bruised lung. Two weeks later, he announced his retirement from driving.

In June 1986, Rick Baldwin crashed during Winston Cup qualifying. He sustained massive head injuries and was in a coma for 11 years before dying in 1997. Clifford Allison, son of retired NASCAR driver Bobby Allison, was killed in a crash in a practice for the Busch Series race in August 1992. 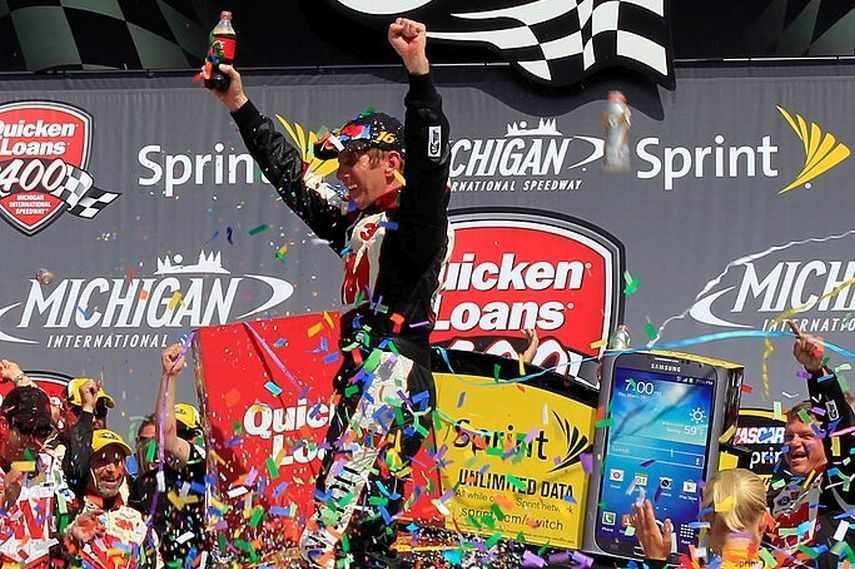 The NASCAR Truck Series came to Michigan in 1999. The race was won by Greg Biffle. He was the winner again in 2000, so with a total of six wins, Biffle is the most successful active driver at Michigan International Speedway.