The era of Group B rally cars in the World Rally Championship, between 1982 and 1986, is still considered as the most competitive and the most remarkable period in a history of world’s rallying. Even thirty years after the Group B cars were banned, those cars provoke the admiration of motorsport fans, primarily because of brutal power which never had been surpassed in the official competition.

In 2017, the new WRC regulations will bring back at least a part of those horsepowers we lost 30 years ago. The new WRC cars, with about 380 hp, would come to the world rally scene to revive a part of the feeling we had while watching Group B monsters. So, this is an opportunity to remember some of the greatest rally cars in a history. Here’s an overview of the Top 5 cars of Group B era, plus some more exciting cars we cannot skip. 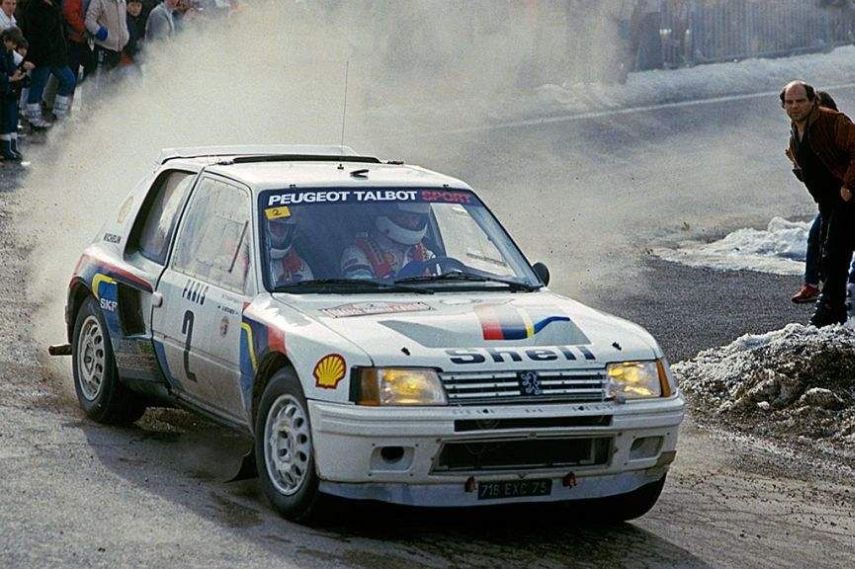 Few cars could be the number 1 on this list, but our choice is Peugeot 205 T16 because of one simple reason – statistically it was the most successful Group B rally car. The French rally monster joined the Group B party later than some rivals, in the fifth round of the 1984 World Championship season, at Tour de Corse in May. The first victory came three months later, at Finland’s 1000 Lakes Rally, with Ari Vatanen as a driver.

From that point until the end of 1986, the 205 T16 won 16 rallies from 28 starts, which was a record for the whole Group B. In 1984, Ari Vatanen scored two more wins, at Rallye Sanremo and Lombard RAC Rally, to place the team on the third place in the WRC manufacturers’ list.

In 1986, Peugeot again took both titles. Drivers’ champion was Juha Kankkunen, who won three times (Sweden, Greece, New Zealand). Salonen was the winner in Finland and UK while Bruno Saby triumphed at Corsica.

Peugeot 206 T16 was a mid-engined 4WD car, with 1.8-litre turbocharged engine which produced about 500 hp in its E2 version. 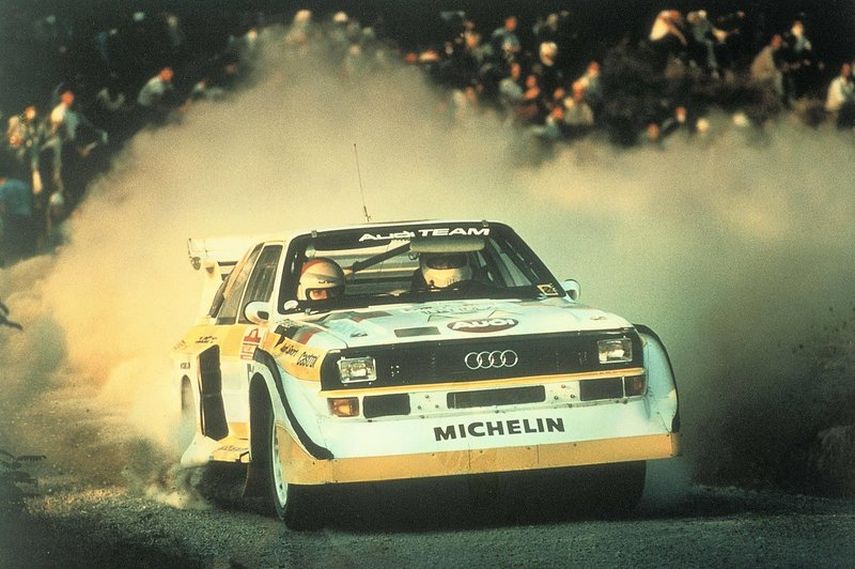 Audi Quattro is a synonym for a real rally car even 35 years after he entered world’s rally scene because it was the first rally car ever with permanent four-wheel-drive. This feature is today the usual thing in the top rallying, but in 1981 it was the revolutionary concept which some manufacturers rejected.

When the Group B rules were introduced in 1982, Audi already had a car which was ready for a slight adaptation, so the A1 version of Audi Quattro was presented. The power of the 2.1-liter turbocharged engine was raised to around 350 hp. Audi won seven rallies in 1982 and took the manufacturers’ title. Michele Mouton won three times and finished second in the championship, behind Opel’s Walter Röhrl. Hannu Mikkola and Stig Blomqvist added two wins each, to finish third and fourth in the points.

In 1983, Audi was combining the A1 and A2 version of Audi Quattro, winning five rallies. Hannu Mikkola was victorious four times and he became the world champion. Stig Blomqvist added one victory at season-closing RAC Rally, but Audi lost manufacturers’ title from Lancia.

In the second part of the 1984 season, the shortened Audi Sport Quattro S1 was introduced, to compete against new fierce rivals 205 T16 and Delta S4. Combining the old Quattro A2 and new Sport Quattro S1, Audi took both world championship titles in 1984. Stig Blomqvist won five times and became the world champion. Walter Rohrl and Hannu Mikkola added one win each.

In 1985 season, Peugeot took over the domination and Audi Sport Quattro S1 won only one event, with Walter Röhrl winning at Rallye Sanremo. At the end of 1985, the Audi Sport Quattro S1 E2 was introduced, probably the most powerful rally car ever built. An inline 5-cylinder 2110cc engine had a peak of about 600 hp. The brutal power and impressive look were good to attract spectators’ attention and that car became one of the most popular of all Group B machines, although it never won the race. Audi withdrew from the championship immediately after a tragedy at Corsica in May, when Henri Toivonen and Sergio Cresto were killed. 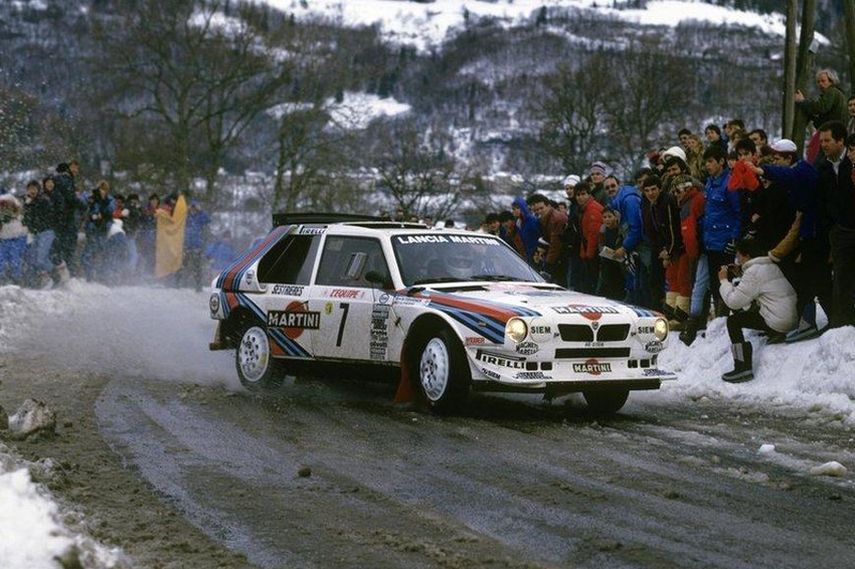 Lancia had two totally different Group B cars and both deserve a place on the list of the best cars, one because of the world title for Italian manufacturers and other because of its cult status among motorsport fans.

Lancia Rally 037 debuted in the World Rally Championship at 1982 Tour de Corse. The rear-wheel-drive car had a four-cylinder 1995cc engine with 265 hp and it struggled with reliability issues in its debut season.  The first proper season followed in 1983 when the team succeeds to take manufactures’ title ahead of Audi.

The 1984-spec Evolution 2 of the Lancia Rally 037 had bigger and more powerful engine, with more than 320 hp, but it wasn’t enough to fight the 4WD rivals. Markku Alen won at Tour de Corse and it was the last WRC victory for 037. Despite the domination of Audi and Peugeot drivers, Alen captured third place in the championship standings, while the team finished in the second place. The season 1985 was marked by the death of Attilio Bettega, who crashed with Lancia Rally 037 at Tour de Corse.

At the last round of the 1985 championship, the Lombard RAC Rally, the new Lancia Delta S4 debuted and Henri Toivonen won the rally. He also won the opening event of the 1986 season, the Rallye Monte-Carlo, introducing the new car as a serious championship contender. In 1986, Lancia was using both Group B cars until Safari Rally in March, which was the last event for Lancia Rally 037, with Markku Alen catching the podium.

The next event, Tour de Corse in May, was the event which caused the closure of the Group B. The cars in 1986 were the most brutal and most powerful ever appeared on rally tracks, with almost 600 hp. Lancia Delta S4 was the same, with about 560 hp from the 1.8-liter engine, both supercharged and turbocharged. Such a beast wasn’t easy to control and unfortunately, it caused one of the greatest tragedies in a history of rallying. Henri Toivonen and Sergio Cresto were killed in a horrific accident on May 2, 1986, at Corsica.

Audi immediately left the championship, Peugeot and Lancia continued to fight for the title until the end of 1986. In that period, Lancia Delta S4 took three more victories, at Rally Argentina, Rallye Sanremo and Olympus Rally. Markku Alen’s victory with Delta S4 at Olympus Rally in the USA, ahead of Juha Kankkunen in Peugeot 205 T16, was the last ever WRC event of the Group B era. 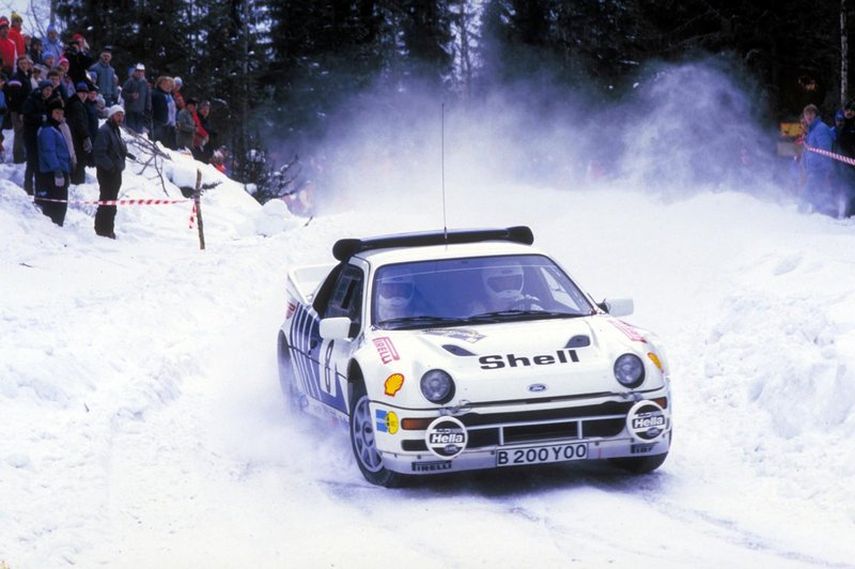 Ford RS200 was one of the unproven Group B rally heroes. The main reason is that it came too late and entered the arena full of the overpowered rivals. When Group B came to the world, Ford had rear-wheel-drive Escort RS1700T, but it wasn’t a proper car to fight against raising 4WD competition. So, the production of the new purpose-built rally car was ordered.  The Ford RS2000 was introduced in 1985, with centrally-mounted 1.8-liter engine and four-wheel-drive. The 450 horses under the hood were just enough to face similar rivals.

At the next event, at Rally Portugal in March, the worst accident of the Group B era happened, when Portuguese privateer Joaquim Santos went off the road with Ford RS2000, killing three and injuring more than thirty spectators. All the factory teams, including Ford, withdrew from the rally.

Later in the season, Grundel and Blomqvist participated in two more rallies (Acropolis Rally and Lombard RAC Rally), with Grundel finishing fifth in the UK.  In June, Ford RS200 was involved in one more fatal accident, at ADAC Rallye Hessen. Marc Surer slid off the road into the trees. His codriver Michel Wyder was killed in that accident.

After the Group B was banned, Ford RS200 became one of the most popular cars in the various rallycross competitions, including its Evolution version which featured a new 2137cc engine with power output  between 550 and 815 hp. 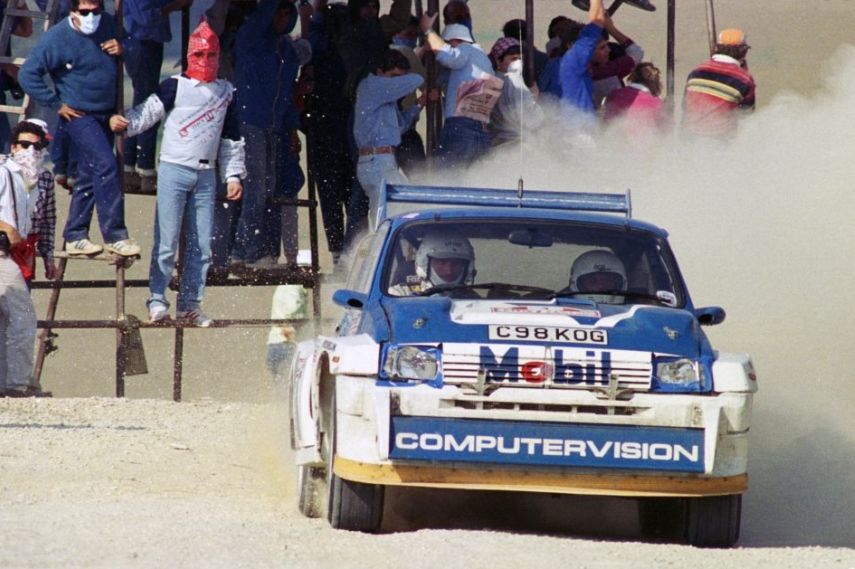 One more Group B monster which came too late was the MG Metro 6R4. The car was unique because it featured 3-litre V6 naturally aspirated engine, which was something completely different compared to turbocharged rivals’ engines.

After competing in many national events, the mid-engined four-wheel-drive car, with more than 400 hp, debuted in the World Rally Championship at 1985 Lombard RAC Rally. British car at British rally scored a sensational podium finish. Tony Pond  finished third, behind two Lancia Delta S4s of Henri Toivonen and Markku Alen. It was also a debut event for brand new Delta S4. The other MG driver Malcolm Wilson didn’t finish the rally.

No luck in WRC, but Metro 64R was winning car in the national rallies

The Austin Rover World Rally Team entered the full season of the 1986 World Rally Championship, with Tony Pond and Malcolm Wilson as the main drivers. The results were under the expectations, with lots of retirements due to bad reliability. It was a quite different story in other international and national rallies, so Metro 6R4 won the 1986 French and British championship titles, driven by Didier Auriol and Alistair Sutherland.

In the post-Group B years, Metro 6R4 was eligible to compete in the British Rally Championship but it became one of the most popular rallycross cars.