The Wood Brothers Racing is the oldest active racing team in the American stock car racing, being founded in 1950 and currently competing in the NASCAR Cup Series. The team was founded by Glen Wood (born 1925) and his brother Leonard Wood (born 1934), located in their hometown Stuart, Virginia. 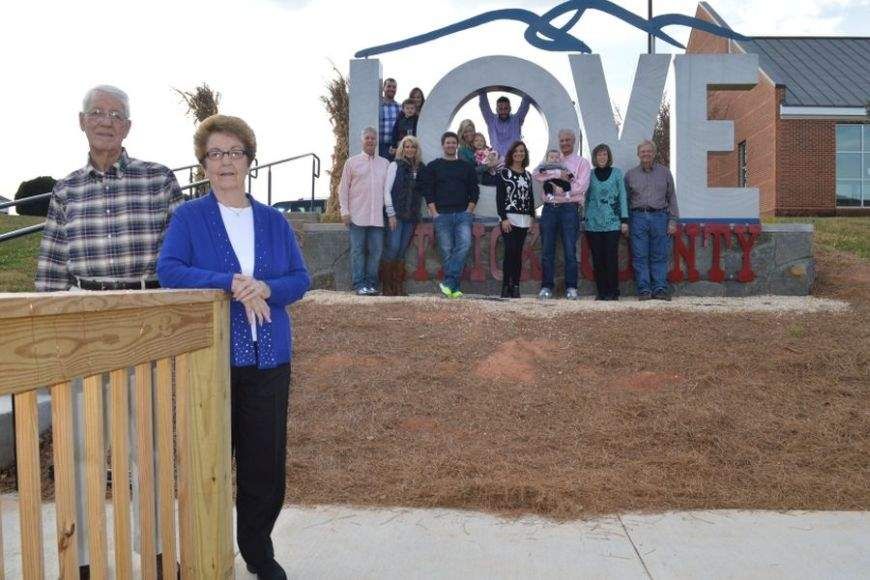 Wood family is running a racing team since 1950

Family business from the beginning and still today

After leading a team for almost forty years, Glen retired in the late 1980s, and the team was taken over by his sons, Eddie and Len. Their sister Kim joined the team after a high school graduation. Currently, the third generation of Woods is involved in team’s operations, with Jon Wood, Jordan Wood and Keven Wood having different duties inside the team.

In 1999, after decades at their old shop location at Dobyns Road in Stuart, the Wood Brothers constructed a massive, state of the art new facility at the Industrial Park in that town. This new home also offered a museum of Wood Brothers memorabilia and history.

In 2004, the team’s headquarter moved from Stuart to Charlotte, North Carolina, the central place of NASCAR activities. Today, Wood Brothers Racing is owned equally by Glen and his children Eddie, Len and Kim. The team is currently running the #21 Ford Fusion for Ryan Blaney in the Monster Energy NASCAR Cup Series. From the beginning, WBR was running only Ford Motor Company cars (Ford, Lincoln, Mercury). 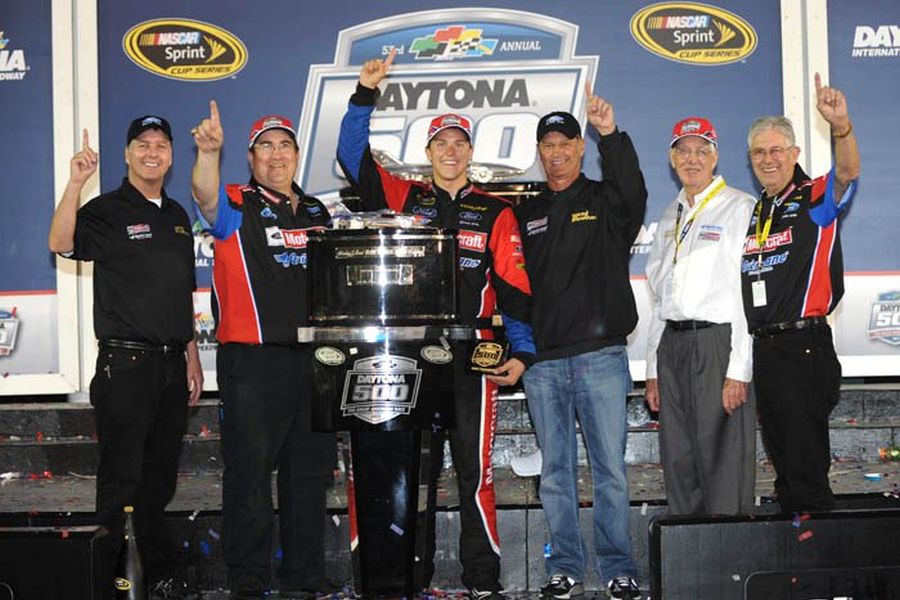 In almost 70-year long history, Wood Brothers Racing scored five wins at Daytona 500, being in the third place among teams, behind Petty Enterprises and Hendrick Motorsports. The last win came in 2011 when Trevor Bayne won the race and became the youngest ever Daytona 500 winner, at the age 20. Previously, WBR’s Daytona 500 winners were Tiny Lund (1963), Cale Yarborough (1968), AJ Foyt (1972) and David Pearson (1976). 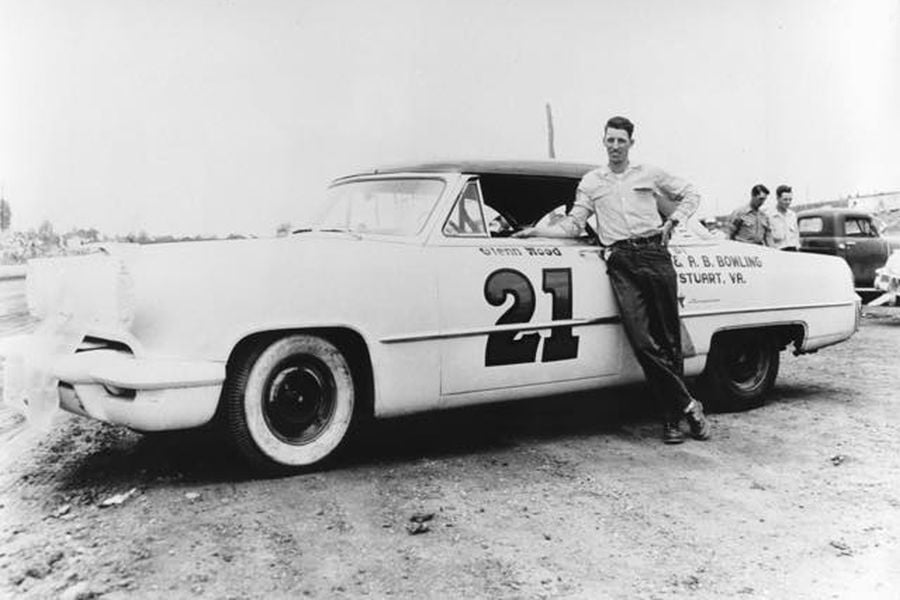 Glen Wood with #21 car early in a career

The story about the oldest NASCAR team started in 1950, when five Wood brothers (Glen, Leonard, Delano, Clay, and Ray Lee), who worked as mechanics, farmers, and lumbermen at father’s farm, decided to run a racing team. Then they got fellow lumberman, Chris Williams, as their driver. The Wood Brothers bought their first car for $50, inspiring them to take number 50 on the car. Chris Williams and Glen Wood each drove a few races.

Shortly after their early success, Chris Williams sold his share of the team to Glen Wood. Williams focused on his lumber business while Wood Brothers Racing evolved from a weekend hobby into a full-time business. 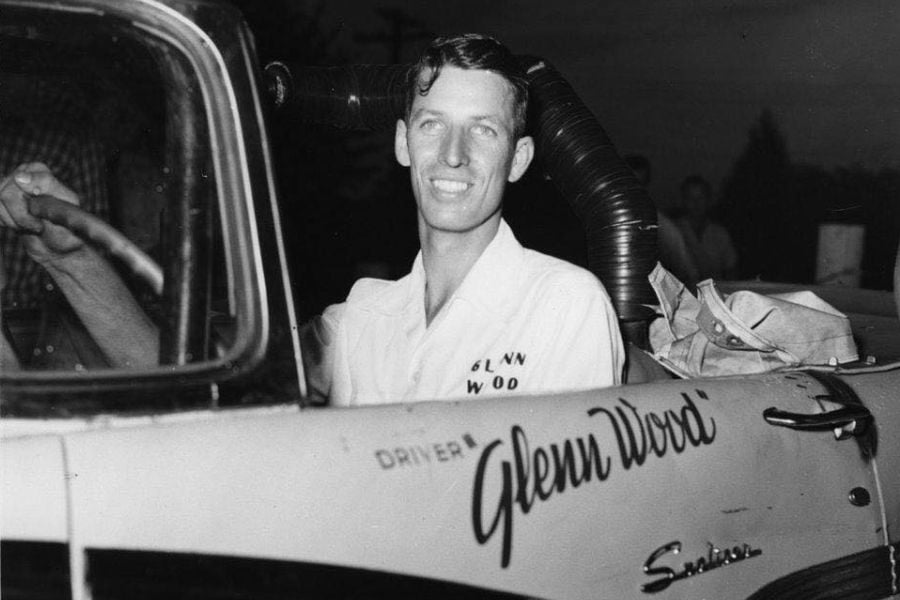 Glen Wood retired as a race car driver in 1964

The team adopted the #21, which became one of the most recognizable numbers in a history of American stock car racing because it was in use for more than 60 years. The #21 debuted in the NASCAR Grand National Series in May 1953, at Martinsville Speedway, with Glen Wood as a driver.

The elder Wood soon became one of the leading NASCAR drivers, earning his place on the list od NASCAR’s 50 Greatest Drivers. His first Grand National victory came in April 1960, at Bowman Gray Stadium in Winston-Salem. In that race, he led for 200 out of 200 laps. In 1960, Glen scored two more wins on the same track. Glen Wood raced until the 1964 season. His last race was on the Starkey Speedway in August 1964. In 1965, he became a full-time team owner. 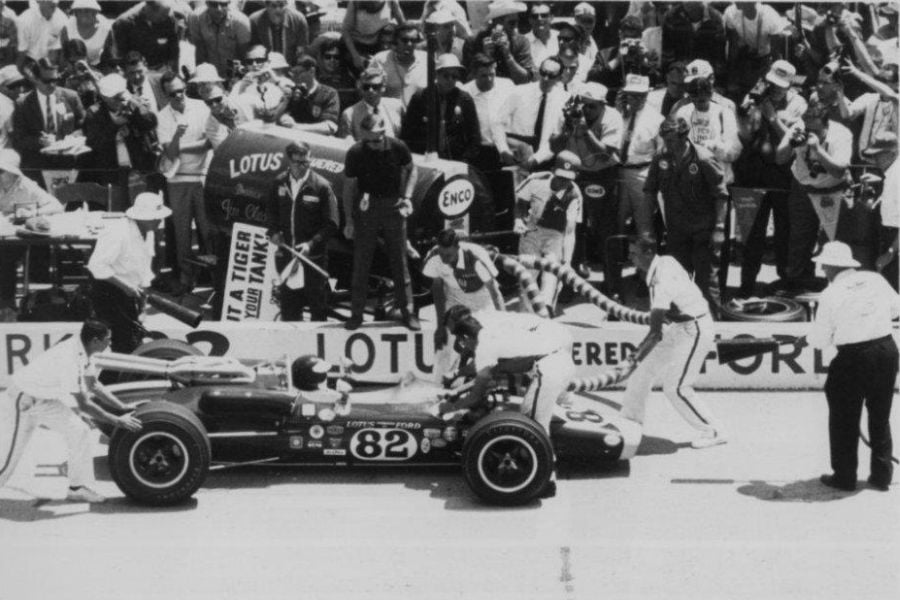 While Glen Wood was racing, his brother Leonard proved as mechanic and strategy genius. He is considered as the inventor of a modern pit stop. In the early days of racing, it was common for drivers to pull into the pits, turn off the car, get out and wait as the crew members are changing tires and servicing the car.

Leonard Wood recognized that they can save lots of time with faster pit stops, so the team created pit stop strategy which earned them an advantage over their competitors. When rivals noticed that Wood’s strategy is good, they started to use it.

Wood Brothers Racing’s crew became famous all over the world because of their work in the pits, so they were hired by Ford Motor Company and Lotus owner Graham Chapman to help their team at 1965 Indianapolis 500.

Jim Clark was driving the #82 Lotus 38-Ford and he became the first Indy 500 winner with a rear-engined car, after leading for 190 out of 200 laps. WBR’s pit stop crew contributed to that victory. 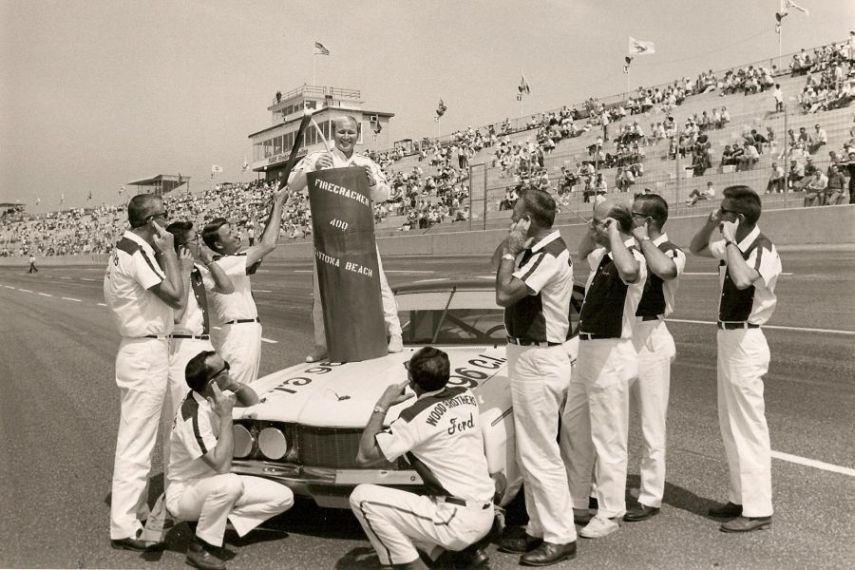 In NASCAR, Wood Brothers Racing was recording many good results during the 1960s, with Cale Yarborough scoring the most wins, including the 1968 Daytona 500. In those years, the team also entered the second car in selected events. It was the #121 for open-wheel star Dan Gurney. He was hired to drive at road course events, winning every race he competed between 1964 and 1968.

In the early 1970s, AJ Foyt was successful in the #21 car, winning four races for Wood Brothers Racing, including 1972 Daytona 500. Then, the era of David Pearson started, who recorded one of the most successful strings of victories in NASCAR’s history.

Until 1979, Pearson scored 43 wins for Wood Brothers Racing, including 1976 Daytona 500. In 1976, Pearson won the Triple Crown of NASCAR, winning the Daytona 500, World 600 at Charlotte Motor Speedway and Southern 500 at Darlington Raceway. 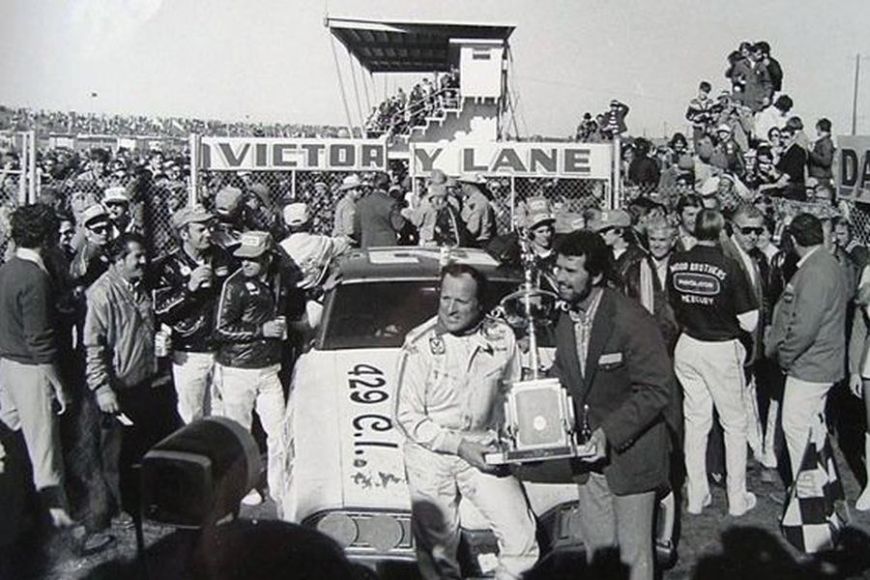 Petty and Wood families together in the 1980s

Neil Bonnett added three wins to the team’s account in 1979, continuing to drive for the team in the early 1980s and scoring six more wins with the #21 Ford. In 1983, Buddy Baker replaced Bonnett, staying with the team for only two seasons.

In 1985, the historic moment happened when Kyle Petty joined the team. Kyle is a grandson of Lee Petty and a son of Richard Petty, so his coming formed a unique union between two famous NASCAR families. As 7-Eleven was one of the sponsors, the team switched from #31 to #7 car. Petty stayed with the team for four seasons, winning two races.

After Petty’s departure to SABCO Racing, Neil Bonnett returned for one more season with WBR. Unfortunately, his career was interrupted by serious injuries in a crash at Darlington Raceway. Then, Dale Jarrett was the driver in 1990 and 1991, winning one race (Michigan).

The veteran Morgan Shepherd stepped into the #21 car in 1992, staying with the team for four seasons. He scored only one victory. In 1996, Michael Waltrip replaced Shepherd. He had no regular season wins but scored a victory at 1996 Winston Select All-Star race. 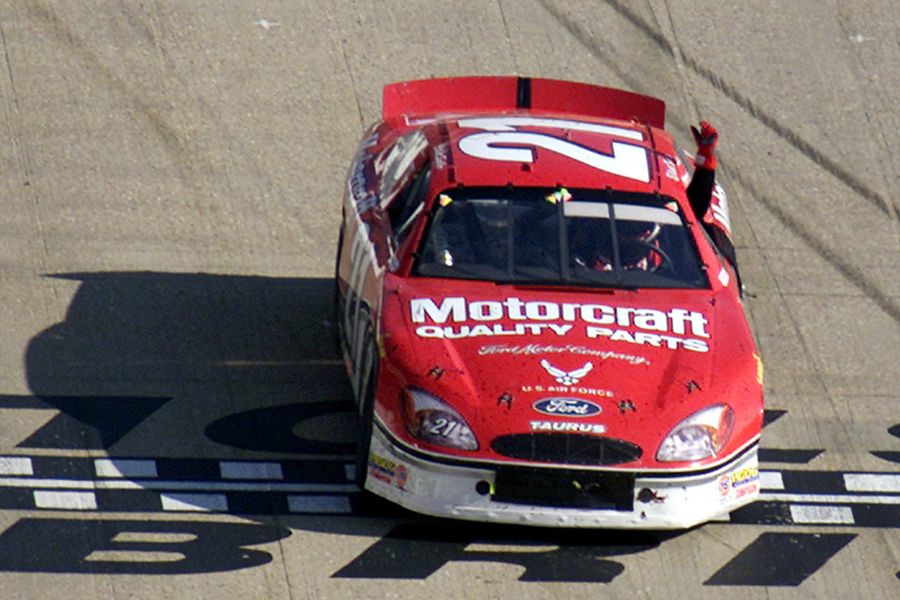 Elliott Sadler in #21 Ford at Bristol

Sadler’s win was the last for ten years

Sadler departed at the end of 2002, being replaced by veteran Ricky Rudd. After three seasons with the team, Rudd announced a retirement at the end of 2005. Another veteran, Ken Schrader, joined the team in 2006, being the only driver that year and sharing the car with Bill Elliott.

In 2006, the Wood Brothers merged with Tad and Jodi Geschickter’s JTG Racing to increase their competitiveness and bring more sponsors, but they separated after two seasons.

In 2008, Bill Elliott, Marcos Ambrose and Jon Wood were driving the #21 in 28 races. In 2009, the team switched to the part-time schedule, participating only in 13 races (Bill Elliott 12, David Gilliland 1). In 2010, Trevor Bayne debuted for Wood Brothers Racing, driving the #21 Ford at AAA Texas 500. Bill Elliot was in the car in twelve races. 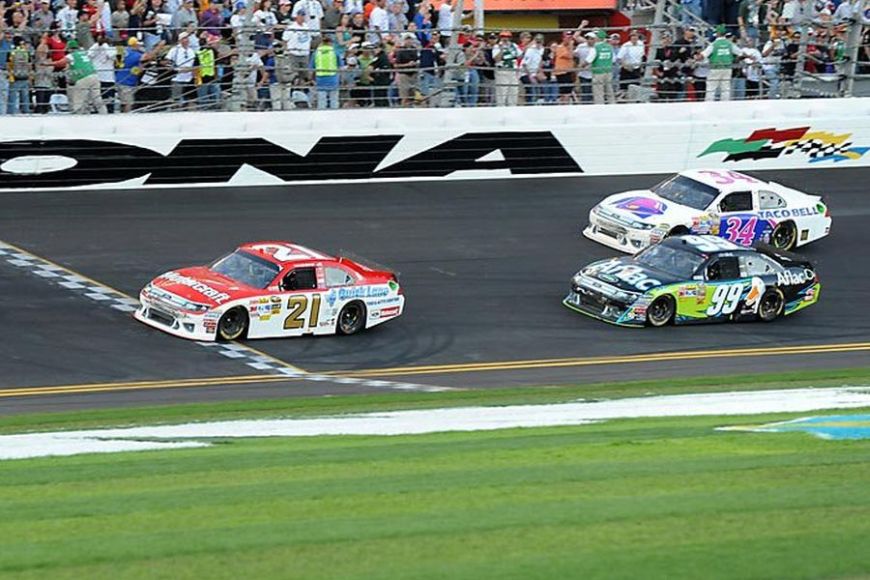 In 2011, the 20-year-old Trevor Bayne became the youngest full-time driver in Wood Brothers history. And then, on February 17, one day after his 20th birthday, he became the youngest Daytona 500 winner. The youngster started 32nd on the grid, led for only six laps and brought a victory to the team after almost ten years of waiting.

Bayne participated in 17 races that years, being replaced in one race because of illness. Bayne stayed with the team for three more seasons on a part-time basis, recording 40 starts until the end of 2014. 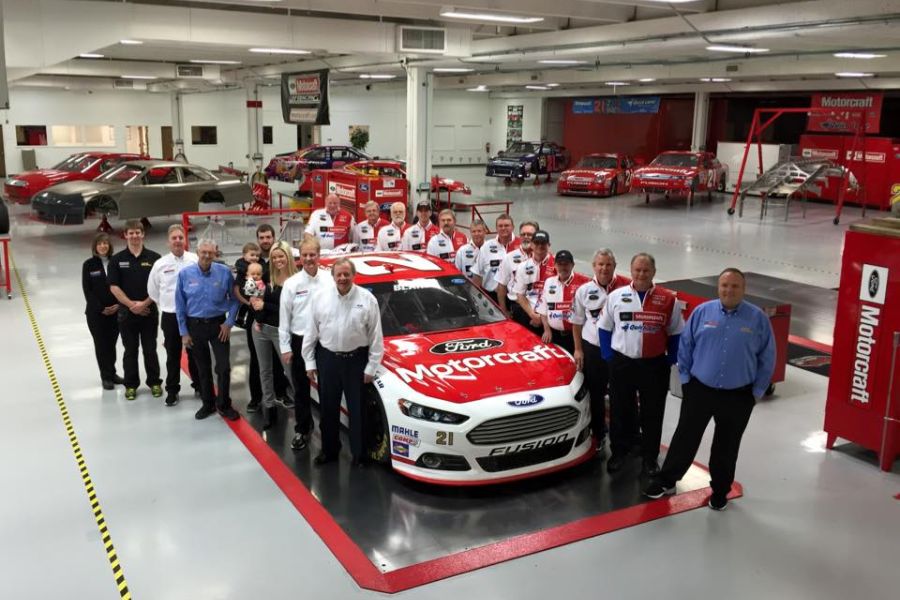 Ryan Blaney joined the team in 2015 to drive the #21 on a limited schedule, participating in sixteen races. In 2016, Wood Brothers Racing participated in all 36 races with Ryan Blaney in the #21 Ford Fusion. He scored three Top 5 results to finish 20th in the points.

For the 2017 NASCAR Cup Series season, Wood Brothers Racing leased a charter from Go FAS Racing, which guaranteed them a starting spot in all 36 races. In June 2017, Ryan Blaney clinched his maiden Cup Series victory at Pocono Raceway and the first win for the team since 2011.

In 2018, Blaney moved to Team Penske and Paul Menard replaced him in the #21 Ford.

77 starts in the Truck Series

Besides racing in the NASCAR premier division, Wood Brothers Racing recorded 77 starts in the NASCAR Truck Series between 2006 and 2008, fielding two cars (#20 and #21). Jon Wood recorded most starts (31), then Boby East (22) and Keven Wood (9). Jon and Keven Wood are grandsons of team founder Glen Wood. 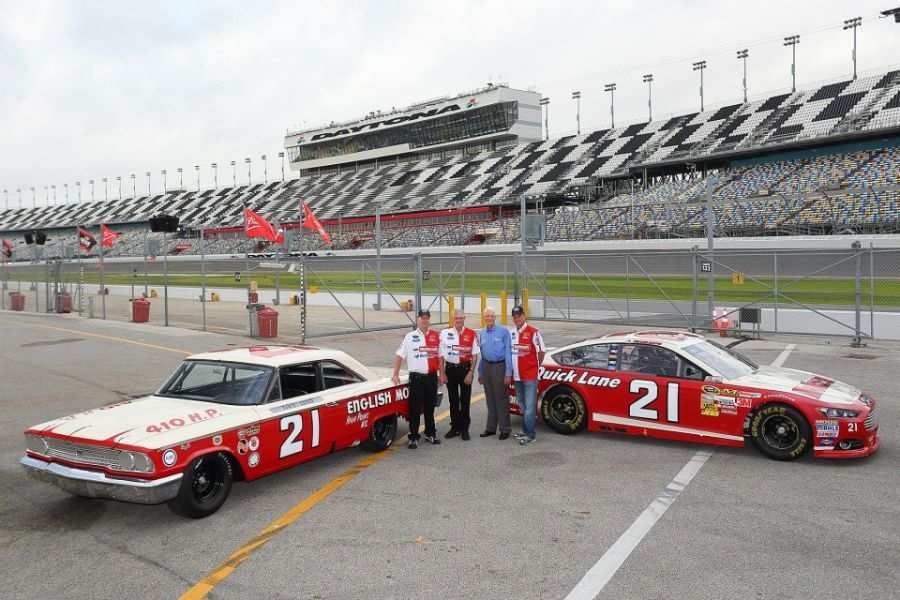 Finally, in 2012, Glen was inducted into the NASCAR Hall of Fame. A year later, Leonard gets that honor. In November 2014, the Guinness Book of World Records officially recognized the team as the Longest active NASCAR team.