The 24 Hours of Daytona is an endurance race for sports cars and prototypes held annually at Daytona International Speedway since 1966. The race is considered as one of the greatest motorsport events in the world.

Together with 24 hours of Le Mans and 12 hours of Sebring, Daytona’s 24-hour race forms the unofficial Triple Crown of endurance racing. 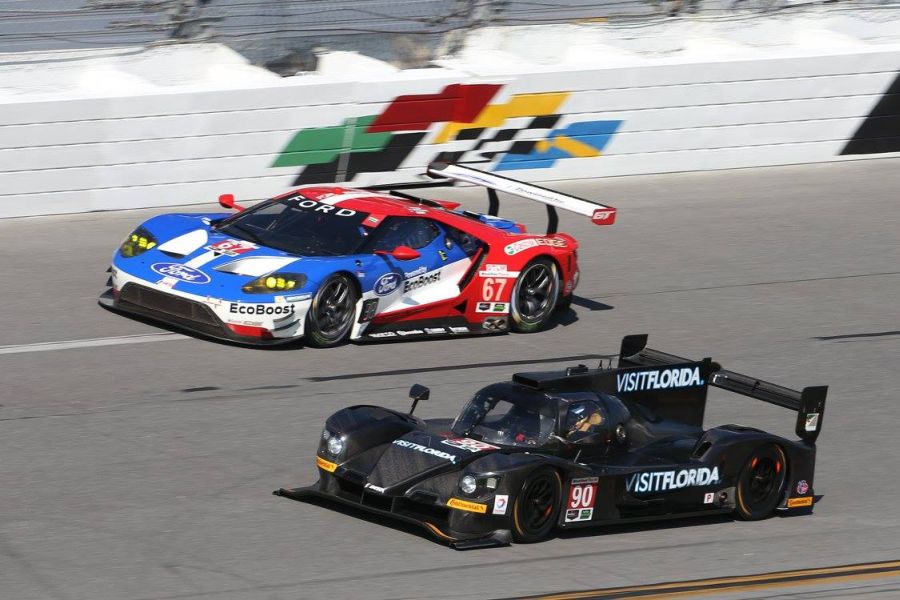 Championships were changing, Daytona 24h was always there 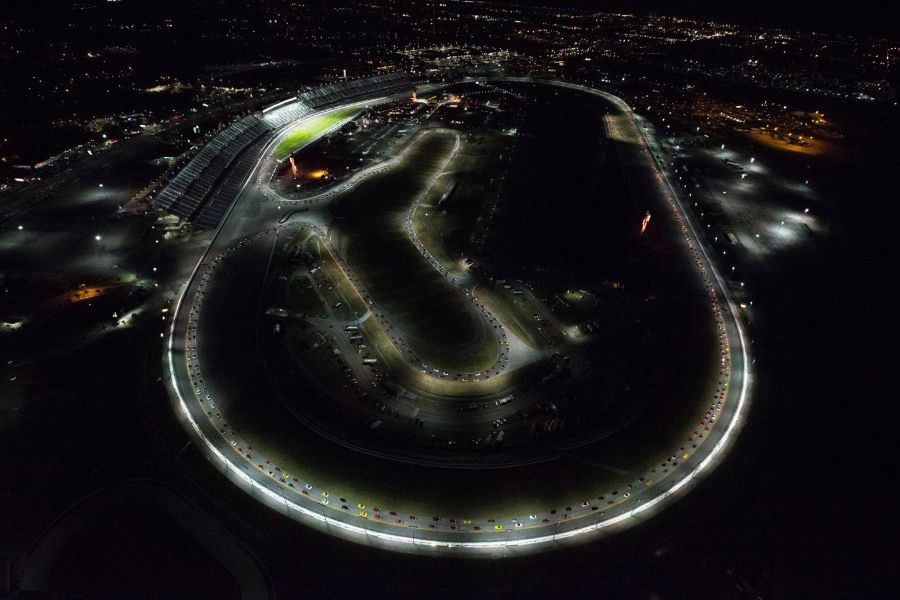 In Daytona 24h Hall of Fame, two drivers are on the top of the list with five overall victories –  Hurley Haywood and Scott Pruett. Haywood was winning between 1973 and 1991, Pruett collected his five trophies between 1994 and 2013. 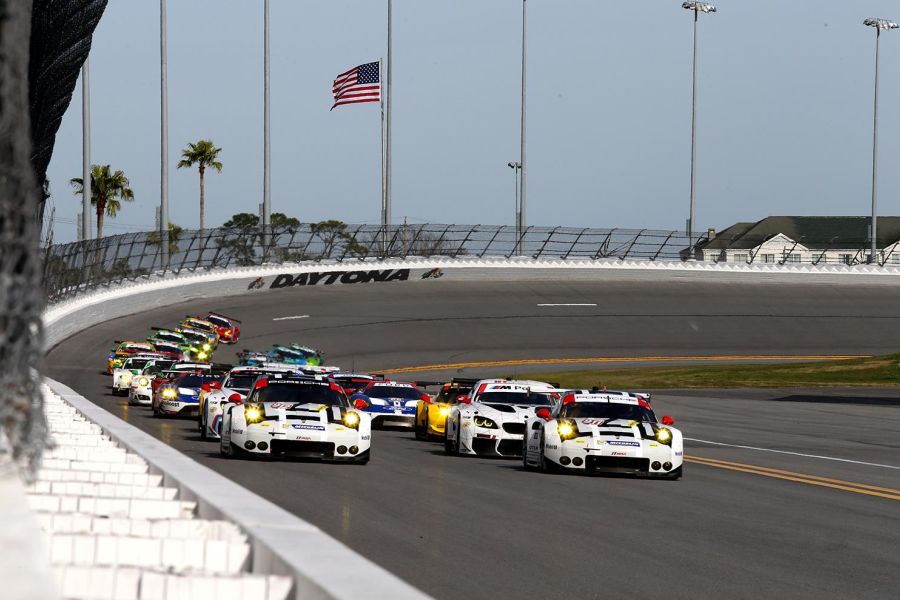 Porsche cars were in front many times at Daytona

Porsche is the most successful manufacturer, Chip Ganassi Racing is the best team

The most dominant sports car brand in Daytona 24h history was Porsche, with 18 overall wins as a constructor and 22 wins as an engine supplier. Riley Technologies is in the second place, scoring ten overall wins with their prototypes between 2005 and 2015.

Ford has six wins as an engine supplier while Ferrari collected five wins both as a car and engine manufacturer. When it comes to individual teams, Chip Ganassi Racing is the most successful team with six wins.

First sports car race at Daytona was held in 1959

The story about sports car racing at Daytona International Speedway started in 1959, the same year when the race track was opened. The inaugural 6-hour/1000km race on the original 3.81-mile course was held in April. The race was part of the USAC Road Racing Championship. The first winners were Argentinians Roberto Mieres and Anton von Dory in the #86 Porsche 718 RSK.

In the next two years, Daytona became the NASCAR-only circuit. In 1962, Daytona 3 Hour Continental race was introduced, as a part of the FIA International Championship for GT Manufacturers. The race had this status for two years, with Dan Gurney winning in 1962 with Lotus 19B and Pedro Rodriguez winning with Ferrari 250 GTO in 1963. In 1964, the distance was four times bigger. Pedro Rodriguez was the winner again, sharing the car with Phil Hill. In 1965, the winners of the 2000 km race were Ken Miles and Lloyd Ruby in the #73 Ford GT. 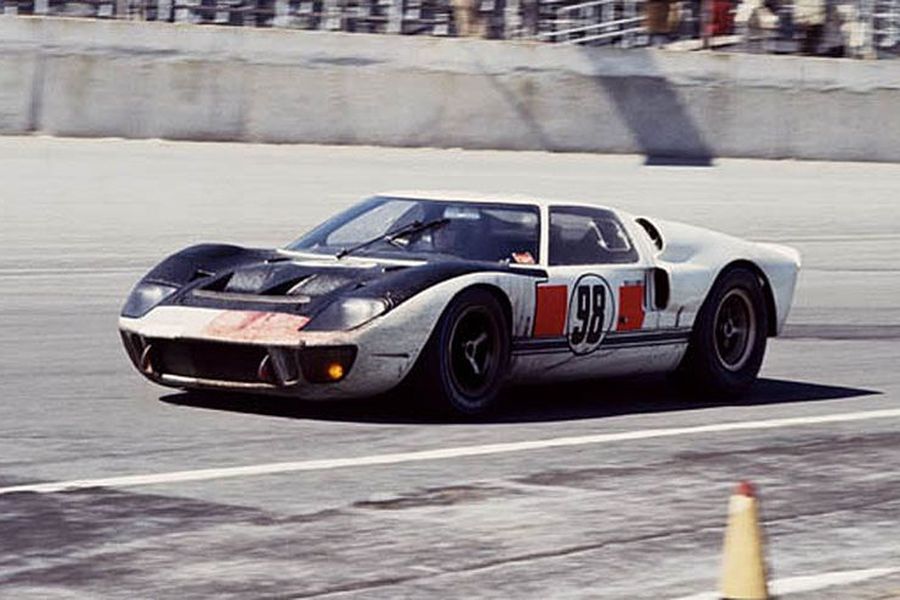 1966 – two times around the clock for the first time

And then, in 1966, the 24-hour race was held for the first time at Daytona. The race was still part of the World Championship. The first 24-hour winners were the same as the year before – Ken Miles and Lloyd Ruby. They were driving the #98 Ford GT for Shelby-American Inc, covering the distance of 4,157 kilometers. Two other Ford GTs took the second and the third place. It was an amazing year for Ford because the American manufacturer scored 1-2-3 victories at 12 hours of Sebring and 24 hours of Le Mans later that year.

Lorenzo Bandini and Chris Amon took the winners’ honors in 1967, driving Ferrari 330 P4. Next year, five drivers participated in the race with factory-entered #54 Porsche 907 LH: Vic Elford, Jochen Neerpasch, Rolf Stommelen, Jo Siffert and Hans Herrmann. It was like that because two other Porsches broke or crashed out during the race. 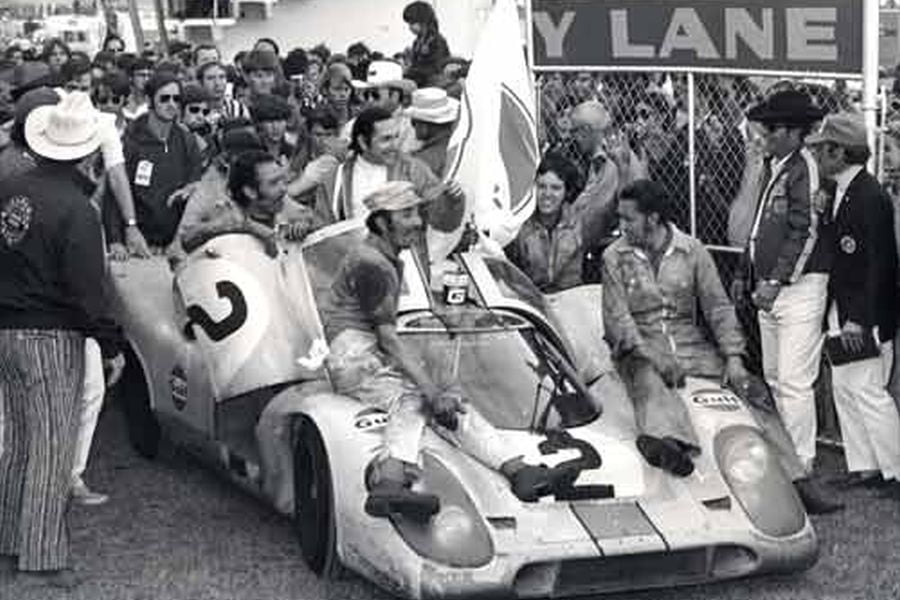 In 1969, two American drivers Mark Donohue and Chuck Parsons scored a victory for an American team (Penske Racing) with Lola T70-Chevrolet. Porsche 917 K was a victorious car in 1970 and 1971, both times with Pedro Rodriguez as a crew-member, so the Mexican set a record with four overall wins.

The energy crisis in the early 1970s caused the shortening of the race in 1972 to 6 hours, while the race was completely canceled in 1974. 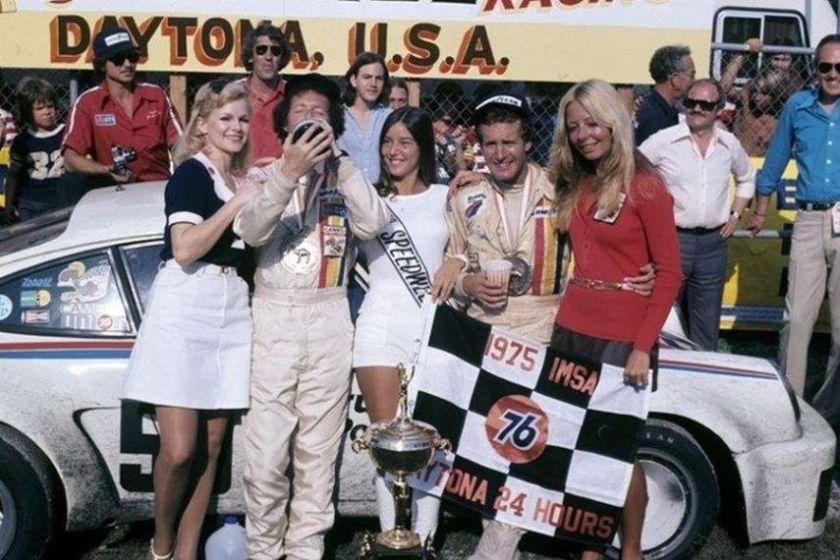 Hurley Haywood and Peter Gregg in 1975

Haywood and Gregg dominated in the 1970s

In 1973, Hurley Haywood started his victorious streak, scoring his first victory with #59 Porsche Carrera RSR of Brumos Racing, sharing the car with Peter Gregg. Haywood and Gregg were the winners again in 1975, driving the same car.

Peter Gregg scored his third win in a row in 1976, driving the BMW 3.0 CSL alongside Brian Redman and John Fitzpatrick. Hurley Haywood returned to the top podium spot in 1977, sharing the #43 Ecurie Escargot Porsche Carrera RSR with John Graves and Dave Helmick.

Then, in 1978, Peter Gregg was the winner again, together with Rolf Stommelen and Toine Hezemans in the Porsche 935. It was the fourth win for Gregg and he tied with the record-holder Pedro Rodriguez. Hurley Haywood joined them on the list with his fourth victory in 1979, sharing the Interscope’s Porsche 935 with Ted Field and Danny Ongais.

Rolf Stommelen became the fourth driver with four wins in 1982 when he was driving Porsche 935 together with John Paul Senior and John Paul Junior.

WSC dropped out Daytona, IMSA took over in 1982

The season of 1982 was the one when World Sportscar Championship didn’t include Daytona 24h in its calendar for the first time, attempting to cut costs by keeping both teams in Europe and running shorter races. The race was still part of the IMSA GT Championship. 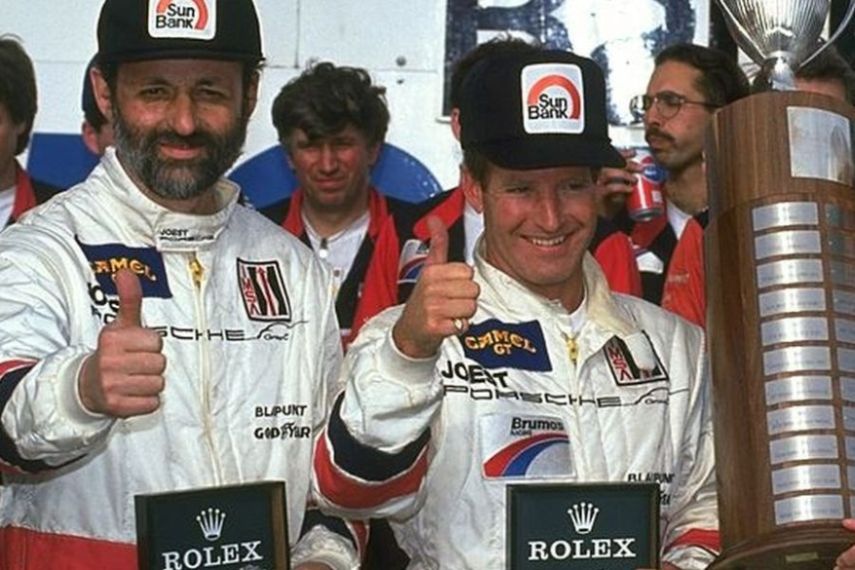 Henri Pescarolo and Hurley Haywood in 1991

The victory of the #7 Joest Racing’s Porsche 962C in 1991 was a historic moment because Hurley Haywood scored his fifth win and became the sole record-holder. For one of his teammates, Bob Wollek, it was the fourth win. Other co-drivers were Frank Jelinski, Henri Pescarolo and John Winter.

Later during the 1990s, three wins of the Japanese manufacturers followed. Nissan R91CP was a victorious car in 1992, Toyota Eagle MkIII in 1993 and Nissan 300 ZX in 1994. Among the drivers of Cunningham Racing’s Nissan 300 ZX was Scott Pruett, who scored his first win at Daytona. 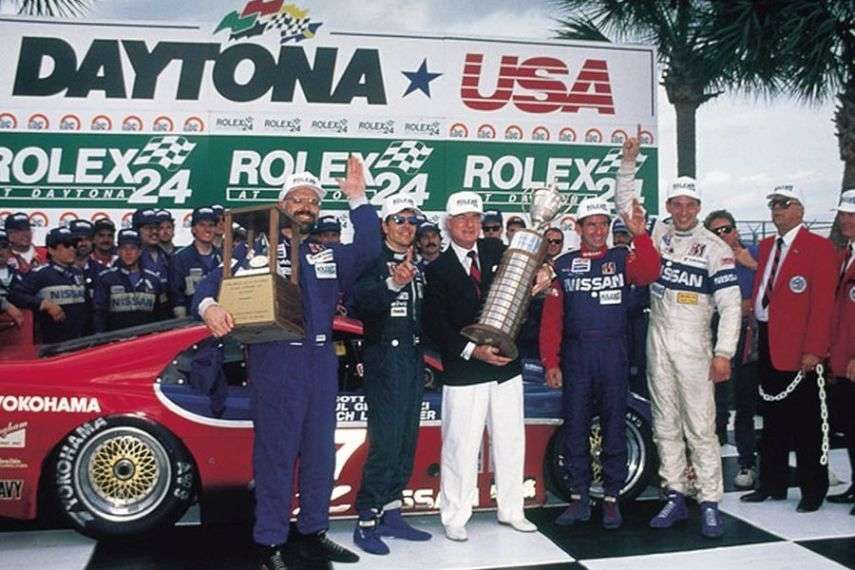 Two drivers for each team competed in the inaugural Daytona 24h. During the 1970s, the number increased to three drivers. The teams were expanding through the years and the absolute record was set in 1997 when seven drivers participated in the victory.

The Rolex Sports Car Series was established in 2000

Rolex, which was the naming sponsor of Daytona race, became the naming sponsor of the entire competition in 2002, so it was renamed into the Rolex Sports Car Series. Since then, Daytona 24h was the season-opening race of that championship and it kept that status also after a merger with the American Le Mans Series in 2014. 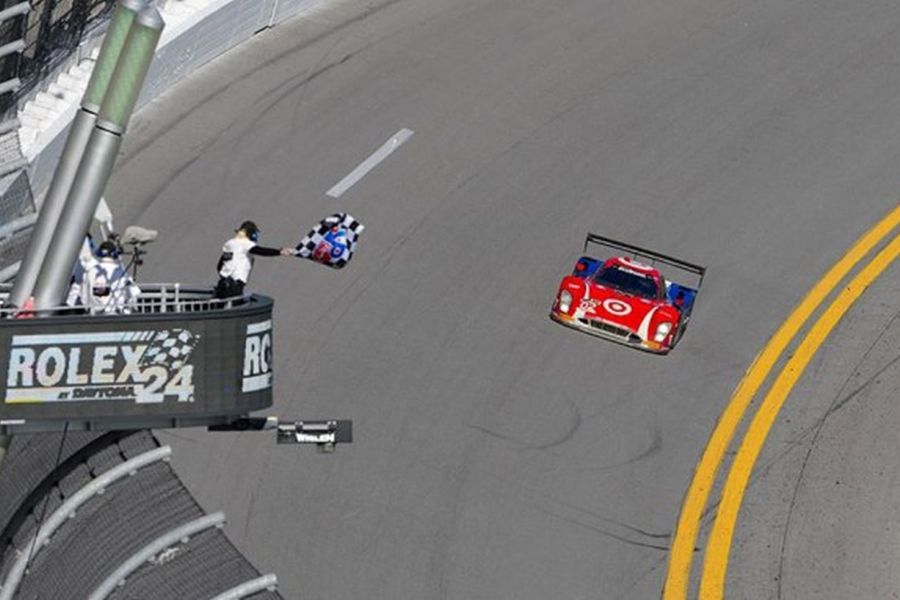 During the 2000s, the Daytona Prototype cars appeared, with Riley Technologies as the chassis manufacturer with most wins. The winning streak started in 2005 and ten victories went to Riley’s account until 2015. The most successful team was the Chip Ganassi Racing with six wins. Scott Pruett was four times among the CGR winning crews, last time was in 2013 when he reached Hurley Haywood’s five wins.

In 2014, Daytona 24h became a part of the IMSA United SportsCar Championship, together with some other American classics – the 12 Hours of Sebring, Petit Le Mans and Six Hours of the Glen. Those four races are forming the North American Endurance Cup inside the IMSA Championship. 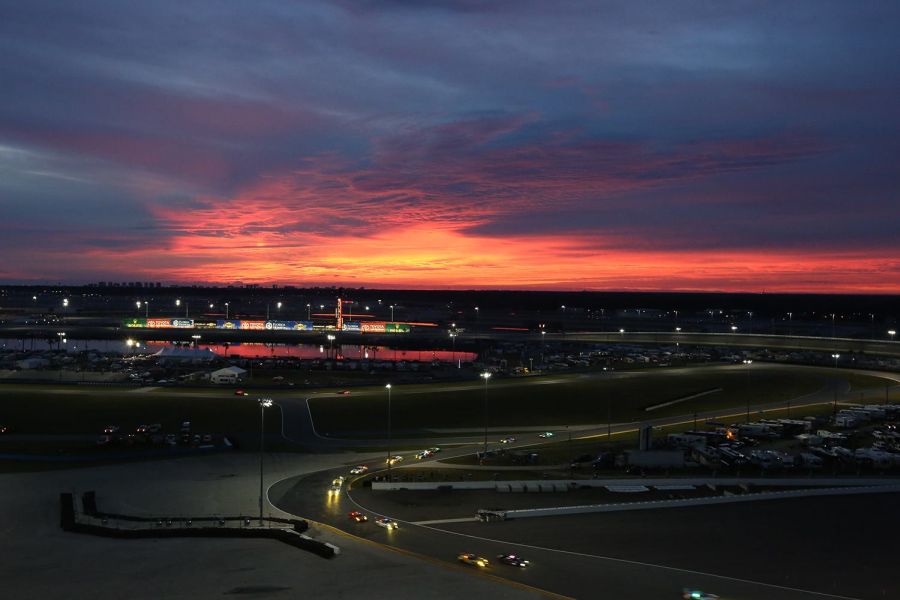 A sunrise at Daytona International Speedway

Daytona’s main difference in comparison to the more famous 24 hours of Le Mans is the time when the race is held. Unlike Le Mans,  the greatest American endurance race takes place every January or February. It means that the nights are longer and competitors are challenged by long stints in the dark.

During the night hours, Daytona Speedway’s lighting system is at only 20% of its maximum to keep cars more dependent on their headlights and it makes the race even more challenging. 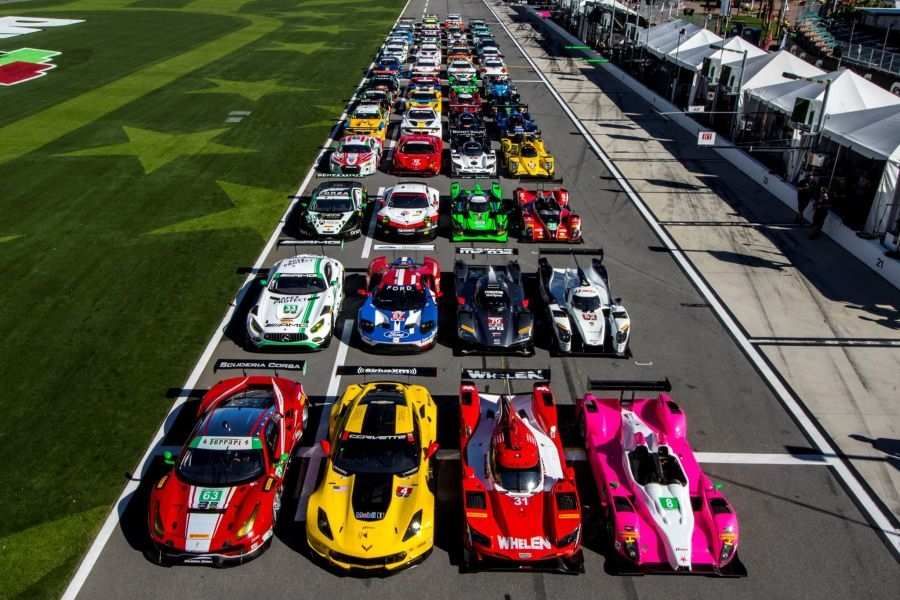