Wales Rally GB (or Wales Rally of Great Britain), previously known as RAC Rally, is one of the most popular rally events in the world, a part of the FIA World Rally Championship since the formation of the championship in 1973.

Among many rally stars who recorded victories in the greatest British rally event, just two of them clinched four wins each – Hannu Mikkola and Petter Solberg, whilst Sebastien Ogier holds the record with five wins.

The cover of the 1932 RAC Rally programme

More than 340 starters in the first ever RAC Rally

Back in 1932, the Royal Automobile Club Rally and Coachwork Competition was organized as the first major rally in Great Britain. 341 crews started from nine different places (London, Bath, Norwich, Leamington, Buxton, Harrogate, Liverpool, Newcastle upon Tyne and Edinburgh) and traveled over routes of approximately 1,000 miles to the finishing point at Torquay.

On every route, there are four controls. As well as completing the route to a time schedule the competitors were required to perform a special test involving slow running, acceleration and braking. No outright winner was declared but Colonel A.H. Loughborough in a Lanchester 15/18 recorded the fewest penalty points in the decisive test at the finish.

In 1933, RAC Rally followed a similar format, but with a finish in Hastings. Over 300 crews participated and Miss Kitty Brunel, driving an AC Ace, was the driver with the fewest penalties. In 1934, the record number of 351 crews reached the finish line in Bournemouth.

The rally was run annually until 1939 when the World War II stopped all racing activities. In that period, different locations hosted the finish of the rally: Eastbourne, Torquay, Hastings, Blackpool, and Brighton. 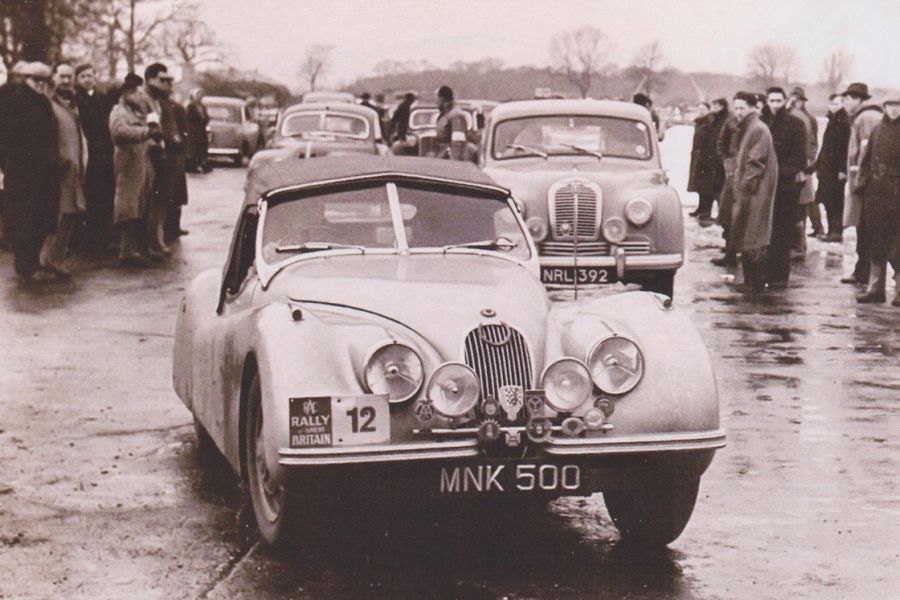 The counting started again with the 1st RAC Rally in 1951

After the war, the RAC Rally resumed in 1951, being named the 1st RAC Rally. Since then, the rally has been contested every year with only two exceptions, in 1957 due to the Suez Crisis and petrol rationing and in 1967 due to the outbreak of foot-and-mouth disease.

In the first post-war event in 1951, there was still no outright winner although Ian Appleyard received an award for the best performance in his Jaguar XK120, navigated by his wife Pat Appleyard. In 1952, one more mixed crew won the event – Godfrey Imhof and Betty Frayling in an Allard J2X.

In 1953, the outright winners were declared for the first time. Ian Appleyard and his wife won the event in a Jaguar XK120. During the 1950s, Blackpool and Hastings were finishing cities mostly while in 1959 London hosted finishers. That event was marked by sixteen foreign crews and the date was moved from spring to November.

RAC Rally as the Rally of the Forests since 1960

The 1960 edition was marked by big organizational changes. The organizing secretary Jack Kemsley negotiated with Forestry Commision to allow a two-mile section of forest road in Argyll, Scotland, to be used as a competitive section. The first Special Stage, called Monument Hill, was born there.

In the following years, the RAC Rally was converted from Rally of the Test to the Rally of the Forests. This, combined with the introduction of special timing clocks and an increasing number of entrants, cemented RAC Rally’s reputation as one of the most grueling and unpredictable rally events.

Three consecutive wins for Erik Carlsson in a Saab 96

In 1960, the Swedish driver Erik Carlsson became the first foreign winner, sharing his Saab 96 with British navigator Stuart Turner. In that time, the rally was already a fixture of the European Rally Championship.

Simo Lampinen recorded one more Finnish victory in 1968 in a Saab 96 V4 and then three more times winner’s trophy went to Sweden. Harry Källström was the winner in 1969 and 1970 in a Lancia Fulvia 1.6 Coupe HF and then Stig Blomqvist won the 1971 RAC Rally in a Saab 96 V4.

Eight consecutive wins for Ford Escort in the 1970s

In 1972, Roger Clark finally stopped a domination of Scandinavian drivers and took his first victory, sharing a Ford Escort RS1600 with Tony Mason. It was a beginning of another supremacy because Ford Escort (RS1600 or RS1800) was the victorious car in the next seven editions of the RAC Rally, until 1979.

Henri Toivonen won the 1980 edition in a Talbot Sunbeam Lotus and then Hannu Mikkola recorded two more wins in 1981 and 1982 in an Audi Quattro, becoming the first four-time winner.

In a post-Group B era, Lancia Delta was a victorious car three times, with Juha Kankkunen taking wins in 1987 and 1991, and Markku Alen winning in 1988. Kankkunen scored his third win in 1993 in a Toyota Celica Turbo 4WD. Carlos Sainz was a two-time winner with Toyota in 1990 and 1992. Mitsubishi also took one victory, with Pentti Airikkala in a Mitsubishi Galant VR-4 in 1989.

Three wins for Colin McRae and Richard Burns each

Another British hero of that period was Richard Burns who won three times in a row from 1998 to 2000, all three rallies with Robert Reid as his navigator. In 1998, they contested in a Mitsubishi Carisma GT Evo V, the next two wins they achieved in a Subaru Impreza WRC.

During the years, the name of the rally was changing slightly. In 1971, the Daily Mirror became the first naming sponsor. Then, in 1974, the finance company Lombard North Central took over the sponsorship and stayed with the organizers for nineteen editions, until 1992.

British rally was a place of many title showdowns

For many years the British rally was the last round on the WRC calendar and many title showdowns took place on British gravel roads and British forests. Probably the most dramatic season’s finale in the history of WRC happened in 1998 during the last day of the rally at Margam Park’s special stage.

With championship leader Tommi Makinen already retiring earlier on stage 7, his rival Carlos Sainz only had to finish the rally to take the title. He entered the last Special Stage in the fourth place but his Toyota Corolla WRC broke out a few hundred meters before the finish line, forcing him to retire and handing WRC title to Makinen.

During the 2000s, Sebastien Loeb dominated in the World Rally Championship, including three wins in GB (2008, 2009, 2010), but another man had an honor to be the second four-time winner – Petter Solberg. The Norwegian claimed his first win in 2002, sharing a Subaru Impreza WRC with Phil Mills.

They climbed to the top podium spot three more times in a row from 2003 to 2005. The most memorable was 2003 event when Solberg took the WRC title with a one-point advantage over Seb Loeb. The 2005 edition was marred by the death of Michael Park.

Two more drivers were the winners in Great Britain during the 2000s – the Finns Marcus Gronholm and Mikko Hirvonen. Gronholm won in 2001 in a Peugeot 206 WRC and then in 2006 in a Ford Focus RS WRC. Hirvonen’s victorious car in 2007 was Ford Focus.

Jari-Matti Latvala scored two wins in a Ford Fiesta RS WRC in 2011 and 2012, before Sebastien Ogier started his domination in the World Rally Championship and at Wales Rally GB. The Frenchman took five consecutive WRC titles from 2013 to 2017 and, in that period, he won four times in Welsh forests. In all those wins, his victorious car was a Volkswagen Polo R WRC.

In 2017, Ogier moved to M-Sport Ford and finished third in Wales. The victory went to his teammate Elfyn Evans, who became the first Welshman ever to win the WRC round on his home ground. Then, in 2018, Ogier managed to take his fifth victory, becoming the sole record holder.

In 2017, Elfyn Evans became the first ever WRC winner from Wales

Unfortunately, there are also sad memories in the long and glorious history of the British major rally. In 2005, the event was marred by the death of Markko Martin‘s navigator Michael ‘Beef’ Park. They crashed in a Peugeot 307 WRC at SS15 Margam on Sunday morning.

The remaining two stages were canceled. Sebastien Loeb, who was leading the rally, voluntarily incurred the time penalty to avoid winning a rally and celebrating his new world title, handing a fourth consecutive victory to Petter Solberg.